When Oliver Peyton closed Manchester’s Mash & Air in 2000 and ran back to London with his tail between his legs, he declared that “Mancunians know nothing about food”. Then it was a debatable point. I never saw anyone eat at in his restaurant but this was the 90s when lunch was for wimps, Madchester was at its height and everyone lived on five Peroni lagers and three lines for their midday fare. 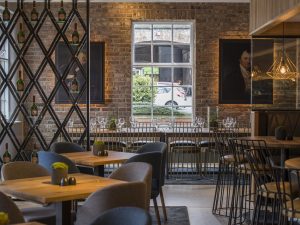 Although my memory of that decade is a little fuzzy, I do remember that it was the last time I visited Dukes 92. Nestled in the basin between the Rochdale and Bridgewater canals, the quickest way to get there was on the tow path from Oxford Road which was flanked by derelict Victorian warehouses, dark and dank corners where muggers, flashers, lions, tigers and bears waited for every innocent passer-by. Some 20 years later I find myself walking along that same tow path, now enveloped by the urban splash of inner city dwellings and bathed in late May sunshine, to meet Helen Nugent, editor of this parish, for a much anticipated and long-awaited lunch.

Not only has the area been rejuvenated but Dukes 92 has undergone a £1 million refurbishment and had its menu refreshed and renewed. Which is the purpose of Northern Soul’s outing and general catch-up. I am led to our table by the friendly, knowledgeable Fay who looked after us all afternoon with an admirable diligence and patience rarely found in one so young. Helen is already there with a much needed gin and tonic in hand to lubricate the exchange of news and gossip that attend our rare get-togethers.

The interior has been stripped back to reveal the building’s industrial past. In a former life, it was used to stable canal ponies; now it looks clean and functional. Nevertheless, it is replete with a history that links to its geography and Northern heritage but is filled with very un-Victorian light and air. The new menu, on first reading, reveals a Lancastrian flavour and some intriguing choices not likely seen on many 19th century bills of fare. 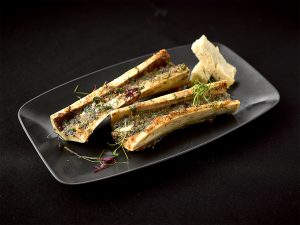 Among a varied list of small plates of pâtés, prawns and pork ribs, I find rabbit fritters. As Helen and Fay both agree that fluffy bunnies are not the stuff of food, my internal jukebox immediately starts playing Elmer Fudd’s operatic rendition of Kill the Wabbit. Slowly braised, mixed with wild mushrooms and coated in breadcrumbs, they tasted of the countryside as only a real rabbit could (sorry Bugs).

I also found a rarely seen baked bone marrow. This came with sourdough soldiers to soak up the seriously delicious marriage of Blue Monday cheese and the unctuous bone marrow. Both dishes showed a commitment to Northern cooking as did Helen’s main choice of a reet proper Lancashire Cheese and onion pie. Her lifelong expertise in this area declared the pie to be not quite “oozy” enough but very tasty nevertheless. Nearly full from the rabbit and bone marrow, I plumped for the Mediterranean pan-fried sea bass which came perfectly light and succulent.

We finished with a shared traditional sticky toffee pudding which I washed down with Rubis Chocolate wine, a spot-on recommendation from Fay and a wonderful companion to the dessert.

As a nation of increasing grazers and too-busy-for-lunchers, it was good to be reminded of what a fine institution lunch (or, as we used to know it, ‘dinner’) is and how it should be cherished before the neo-liberals rob us of it altogether. The new menu at Dukes 92 is an excellent place to celebrate it and send a clear and loud message to Oliver Peyton that Mancunians do know about food.