“Nothing in his life became him like the leaving it.” So says Malcolm of the Thane of Cawdor in Macbeth. If only the same could be said of Great Britain abandoning its Empire.

Somalia, Palestine, Sri Lanka, Burma, India and Pakistan; all post-colonial conflicts which echo down to 2017 with little sign of reconciliation. Now Partition at West Yorkshire Playhouse explores the resonances of the partition of India in 1947; two families, both alike in dignity, in Bradford, where we lay our scene, from ancient grudge break to new mutiny, as Shakespeare nearly put it.

Ranjit and Saima are in love and today is their wedding day. They have an appointment at the town hall with a rather nervous young registrar who is doing her first wedding. Ranjit has the ring but can they get a witness? They were hoping Saima’s brother would do it, but Ranjit is a Sikh and Saima is a Muslim, and her mother certainly doesn’t approve. Ranjit is hoping his Dad will show up, but he thinks it’s unlikely for the same reason.

The parents’ disapproval comes from their experiences during partition. Based on the two-nation theory (the idea that religion was key to an Indian person’s identity, more than their ethnicity, language or geography), partition created two new countries: east and west Pakistan – where the Muslims would live – and India would be predominantly Hindu. Some 12 million people had to leave their homes for the ‘right’ country and millions died, often from atrocities visited on them by the other side. Ranjit’s and Saima’s parents were children at the time, and came to Britain shortly afterwards, but they arrived with memories of terrible things.

After a mad scramble to find witnesses – Ranjit co-opts a couple from a nearby coffee bar – the wedding goes ahead and the parents turn up, love conquering all, but not before we’ve heard their dreadful stories of religiously motivated massacres.

This is a simple tale, but it does the job. Partition started life as a radio play produced by BBC Radio Leeds, written by Nick Ahad and directed by Stefan Escreet. The broadcast was followed by a short history of why and how partition took place. In transferring the play to the stage at West Yorkshire this message was lost, which was a pity because it answered questions about why the politicians, British and Indian, decided this was the best solution. The Law of Unintended Consequences strikes again. 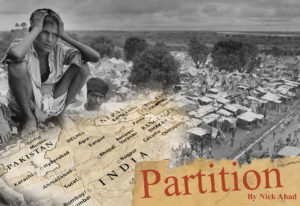 The play was mounted as though we were watching a radio play being broadcast live, complete with sound effects. Radio has lots of advantages for actors and producers – you don’t have to learn your lines, you don’t have to dress up, you don’t have to build scenery, and one actor can play lots of different parts in different voices. One of the glories of this production was watching Darren Kuppan go from playing Ranjit to portraying Saima’s brother and Rajpal (his father), all physically and vocally different, in the time it took him to go from one side of the microphone to the other. Balvinder Sopal was equally convincing as Mandy the registrar, Saima’s mother, and Denise from the coffee shop.

In a post-show discussion with the audience, a number of whom identified strongly with the story, the cast said it reflected their own experience of growing up in this part of the world, but the production had been a journey of discovery  as their parents never talked about what had happened, and it wasn’t taught in school.

At one time there was a company in West Yorkshire called Leeds Theatre In Education, TIE for short, which did exactly this sort of thing. It was one of 35 similar companies around the country taking good theatre into schools. They were all cut in the 90s as a result of changes in Arts Council policy as well as the 1988 Education Reform Act which altered the way schools were funded. Nothing has replaced them. This is surprising as there must be much more efficient ways of delivering this kind of content today via social media, podcasting, and YouTube. If he were alive today, Shakespeare would be using them.