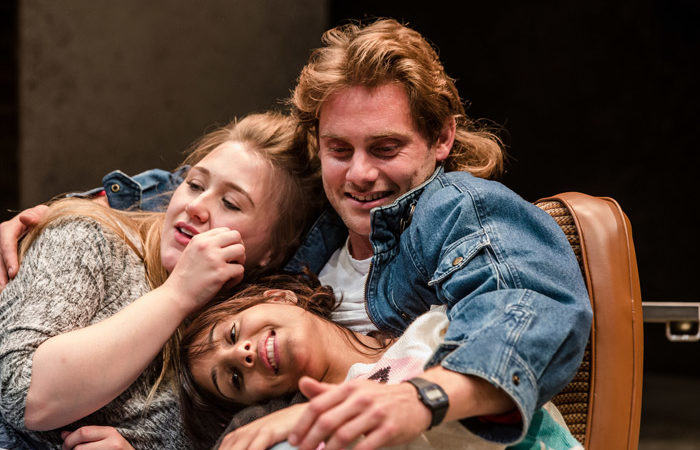 Rita’s Dad has done a runner and we never meet her Mum. She is perhaps the needier of the two, played well by Taj Atwal. Gemma Dobson, a local girl who trained at Manchester School of Acting, is embarking on her professional debut as Sue, and does it convincingly. They both almost persuade me that they’re 15, and know a lot about getting by and not much about anything else.

The girls don’t seem to enjoy it much to begin with, but as the relationship continues they clearly get on top of it and can’t wait for the chance of ‘a jump’. Then Michelle discovers condoms in Bob’s pocket when she’s doing his ironing and things start to fall apart. Along the way we meet Sue’s Mum and Dad; she’s a woman who’s learnt to manage an idiot husband, a man with no power outside the home. Violence is constantly hinted at but we never see it.

The rest of the cast are extremely accomplished too, especially given that James Atherton as Bob had to spend the first ten minutes of the play bare-arsed with his back to the audience while he jumps the girls in the front of his car. It’s all very decorous, if such a thing can be decorous, and there’s nothing prurient, but this is the opening night of Bolton Octagon’s 50th anniversary season and the Mayor of Bolton’s face was a picture. I hesitate to think what Atherton’s face was like.

The men are a couple of hopeless cases. Bob is a slave to his sex drive and Sue’s Dad (David Walker) to his beer, but they are both struggling to keep up some sort of masculinity in the face of unemployment. Michelle (Samantha Robinson) and Sue’s Mum (Sally Bankes) are copers. They manage their children, their jobs and their men; they do everything at home and they know everything. They have no illusions. They are grown-ups.

Played on a simple, clever set with a rather beautiful backdrop of the dales designed by Tim Shortall, the play was directed by Kate Wasserberg and Max Stafford-Clark, and it’s on tour and heading for London’s Royal Court. 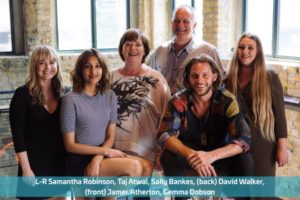 First produced at the Royal Court in London in 1982, it was written by Andrea Dunbar who was only 19 at the time and lived on the Buttershaw estate in Bradford, a council estate exactly like the one in the play. The production was almost as much of a shock to the London culturati as Look Back In Anger had been 25 years before. The casual sex certainly was.

Whether it still has that quality I doubt. I also doubt that we are surprised by it, shocked by it, appalled by it as we once were. Its candour about the lives of its protagonists and its dark humour are things we have become used to as television has dealt with harder topics, in search of newer, more shocking content. I did wonder, as I watched the first scene, how today’s audience would react to the story of a 27-year-old man having sex with two 15-year-old girls when just up the road a lot of men were recently jailed for doing just that. But the play gets away with it, partly because Bob doesn’t coerce or groom the girls in any way, partly because the girls clearly start to love it and look forward to it, and partly because the play is utterly unsentimental about everything, even love.

It’s still very funny and the performances are excellent, but it’s very much a play of its time and has little to say to us now. After all, it was written in 1982, and Margaret Thatcher was just getting into her stride.

Rita, Sue and Bob Too is at Bolton Octagon until September 23, 2017 and then touring. For more information, click here.