Her mother, the pioneer radical and feminist Mary Wollstonecraft, died after giving birth to her and young Mary Godwin grew up having to pass the room she died in every day. Her father taught her to read by tracing her name on her mother’s gravestone. Aged eight, she hid behind the living room sofa to hear Coleridge read The Rime of the Ancient Mariner to her father, the radical philosopher William Godwin. As a teenager, one of her arms developed a mysterious and painful handicap requiring a sling and bandages. She had the run of her father’s library and was precociously clever.

Then, at 16, she eloped with the (married) poet Percy Shelley to the continent. By the time she was 17, she had given birth to, and buried, her first child. By the time she was 18, her half-sister had killed herself, as had Percy’s wife. Before she turned 20, Mary Shelley had written Frankenstein. Some 200 years later, we’re still talking about it. 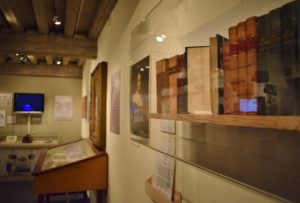 Now, poet, writer and biographer Fiona Sampson has curated an exhibition for the Wordsworth Museum in Grasmere, focusing on those formative years for ‘the girl who wrote Frankenstein’. Video screens nod to the subsequent direct and indirect impact of the book on film, theatre and dance but, for the most part, the exhibition wisely plays to the Wordsworth Trust’s strength in depth in books, artefacts and pictures from the 18th and 19th centuries. 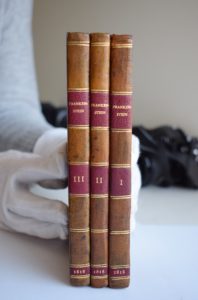 So, there are contemporary pictures of places that Mary Shelley visited and which turn up in the book (there is one of castle Frankenstein, natch, though she merely passed close by). There are books she wrote – she was far from a one-hit wonder – and made a living from writing for many years, though Mary’s family so disapproved of her that her books were sometimes identified merely as written by ‘the author of Frankenstein’. There are books she read including Gothic novels and works by both her mother and father. There’s the hotel guestbook where the Shelleys identified their next destination as ‘hell’ (‘l’enfer’), from the summer when the 18-year-old Mary began the ‘ghost story’ which was to become Frankenstein.

And there are two very different creative responses by contemporary artists. Painter Martin Hazell begins from a much later, formal portrait to imagine Mary as she was when she met Shelley. She’s 16, glimpsed peeping through a doorway. It’s a moment based on the lawyer Thomas Hogg’s account of ‘the glance of a moment, through a door partly opened’ while accompanying Percy on a visit to Godwin. In complete contrast, the cartoonist Hunt Emerson has produced a 50-odd panel version of the novel (following earlier versions of The Ancient Mariner and Dante’s Inferno). The interplay between these creative offerings and the expected museum fare really lifts the exhibition. 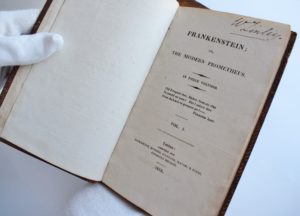 Here’s a tip: the books and pictures on display mean so much more if you can place them in Mary Shelley’s life. Sure, there is plenty of information on the displays – but there is only so much you can take in at once. Normally, I like the spontaneity of finding out on the spot, but I was lucky enough to hear Sampson talk about Shelley’s life and the exhibition before I went to see it and she’s an eloquent advocate. You can check her out on social media such as this blog post or this podcast, both of which are tasters for the biography. Looking at the first three editions of Frankenstein side-by-side is pretty amazing but seeing them, already knowing about the life which produced them, is even better. Maybe the best exhibitions exist somewhere between those familiar glass display cases and your own imagination? 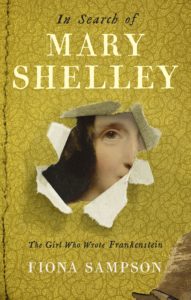 Mary Shelley: The Girl Who Wrote Frankenstein is at the Wordsworth Museum in Grasmere until August 27, 2018. For more details, click here.