I am many things but I am not a good cook. During my GCSE Home Economics exam I burnt a potato in the microwave, sending waves of pungent fumes throughout the school. As I looked up in anguish at my teacher, she said “um, just say it didn’t work out as planned”.

Despite my teenage culinary embarrassment, I never quite gave up on making food from scratch. Yes, there was a later catastrophe involving mackerel and another microwave which meant that my studio flat reeked of fish for a year, but, in the midst of recent lockdowns and prolonged periods of social distancing, I tried really, really hard to make real food. I raided the supermarket’s spice shelves, flipped through the pages of Jamie Oliver’s various tomes, and faffed about with Herbes de Provence. At one particularly desperate point, I attempted an Ottolenghi recipe in The Guardian. I still think it would’ve worked if my local Co-op had stocked puy lentils.

So, when an invite to ‘dine in the heart of the action’ at Northcote arrived in my inbox, I cast aside my Pot Noodle (Bombay Bad Boy) without a second thought. As an award-winning Michelin Star restaurant and hotel in the Ribble Valley, Northcote has carved out a much-deserved reputation as fine dining at its best, and executive chef Lisa Goodwin-Allen is a massive part of that. And yet, on a national level at least, for some unfathomable reason it’s not as well known as another local favourite, The Inn at Whitewell.

I asked me mum to drop me off in Langho and, in a scene not unlike the one where Joey from Friends consumes an entire turkey (elasticated pants, anyone?), I readied myself for the chef’s table. I’d barely had a chance to check the give in my trousers when the sublime English Nyetimber sparkling wine started circulating, followed by an amuse-bouche of Lancashire Butter Pie which, given its buttery melt-in-the-mouth magic, can only have been concocted by the Pendle witches. 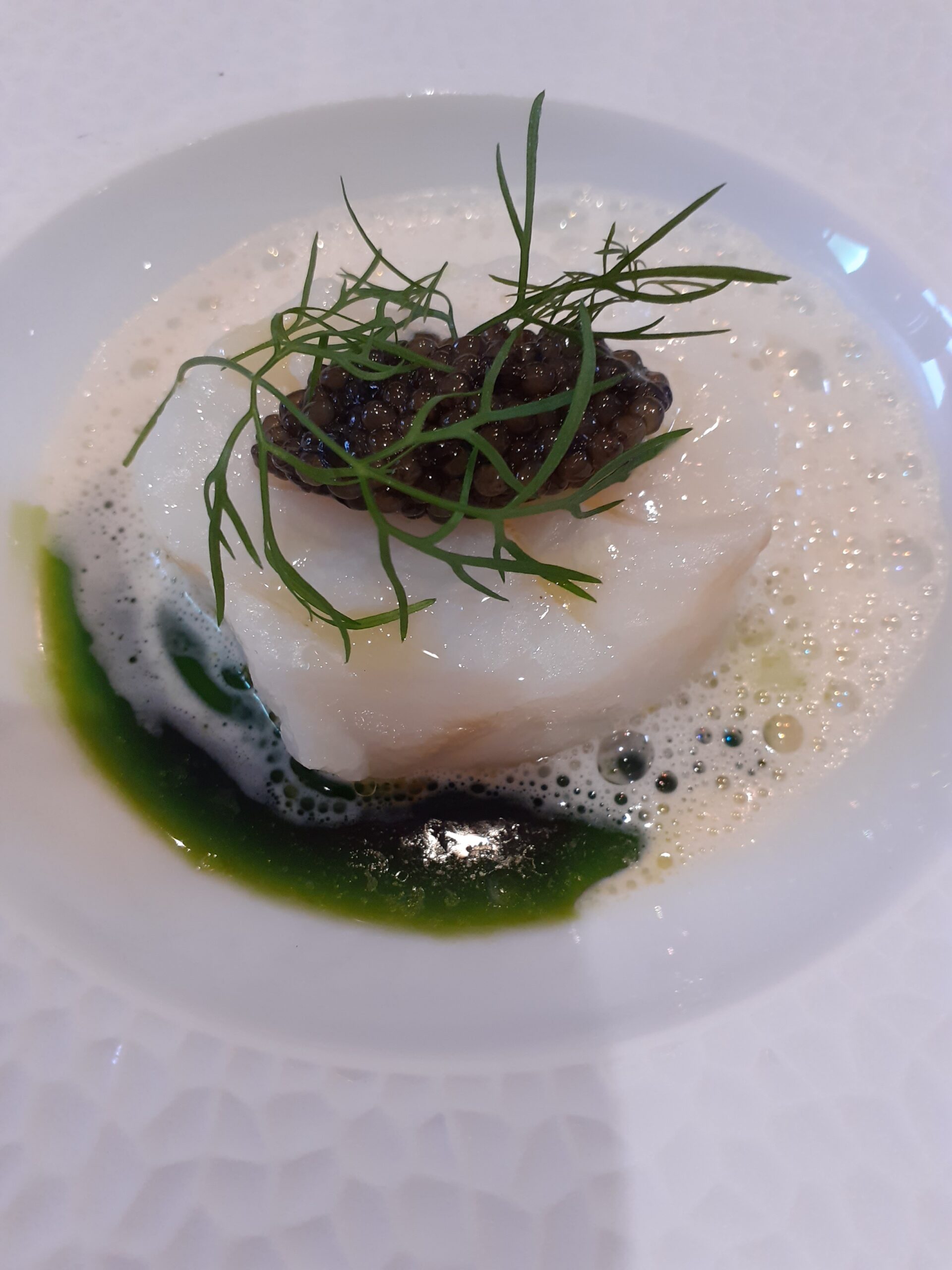 Chef’s table is pretty special. In some restaurants, it’s a tiny space squirreled out from a corner of the kitchen. In others, a specially-built room replete with screens showing every move by every chef. In this instance it’s a respectable medium. Set within the kitchen but separated by glass sliding doors, it’s a happy yet vaguely distant marriage of cooks and diners.

With the new spring menu on the horizon, there’s a bunch of us journalists here for the tasting menu, consisting of dishes past and present. There isn’t a collective noun for journalists but I reckon I can borrow the moniker for a group of cats: a glaring. It can’t be much fun for the chefs to see our pasty faces peering through those transparent doors. 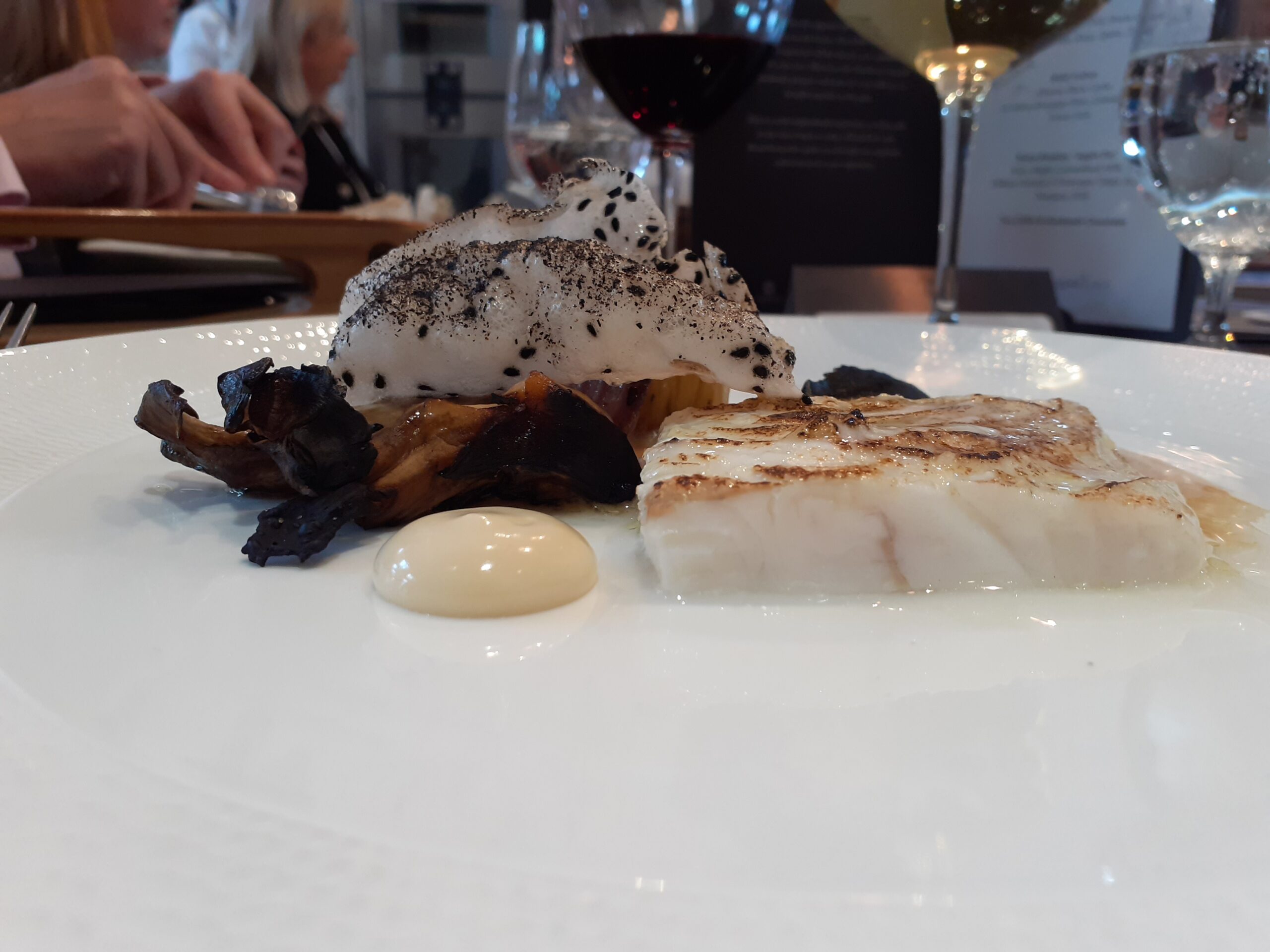 Glaring and staring aside, onto the main event. As a non-meat eater, I have a bespoke fish menu. First up is Orkney Scallop, chaperoned by a green curry with the style and grace of a partner plucked from the ballrooms of Bridgerton. The delectable concoction is lightly dolloped with cultured yogurt and a lemon melange of nitrogen-fuelled theatre. Should I eat it or take a photo?

With barely time for a curtsy, it’s time for the Skrei Cod to make its entrance. Happily, I reacquaint myself with Nyetimber which is part of the dish, along with cucumber, dill and Sturia Caviar. The only thing I’ve ever inhaled anything this quick was a McDonald’s when I had my tonsils out and, after weeks of agony, could finally swallow. High fishy five.

Then I see the Wild Turbot, all alliums and black garlic. It’s astounding that someone who is allergic to fish (executive chef Lisa Goodwin-Allen) can create dishes as incredible as this. However, it’s at this point that my handwritten notes become a bit sketchy. I’m pretty convinced that I thoroughly enjoyed the 2018 Bourgogne Blanc as well as the earlier Alvarinho Soalheiro and Contino Blanco. All told, the wine pairings were every bit as good as the coupling of Fitzwilliam Darcy and Elizabeth Bennet. 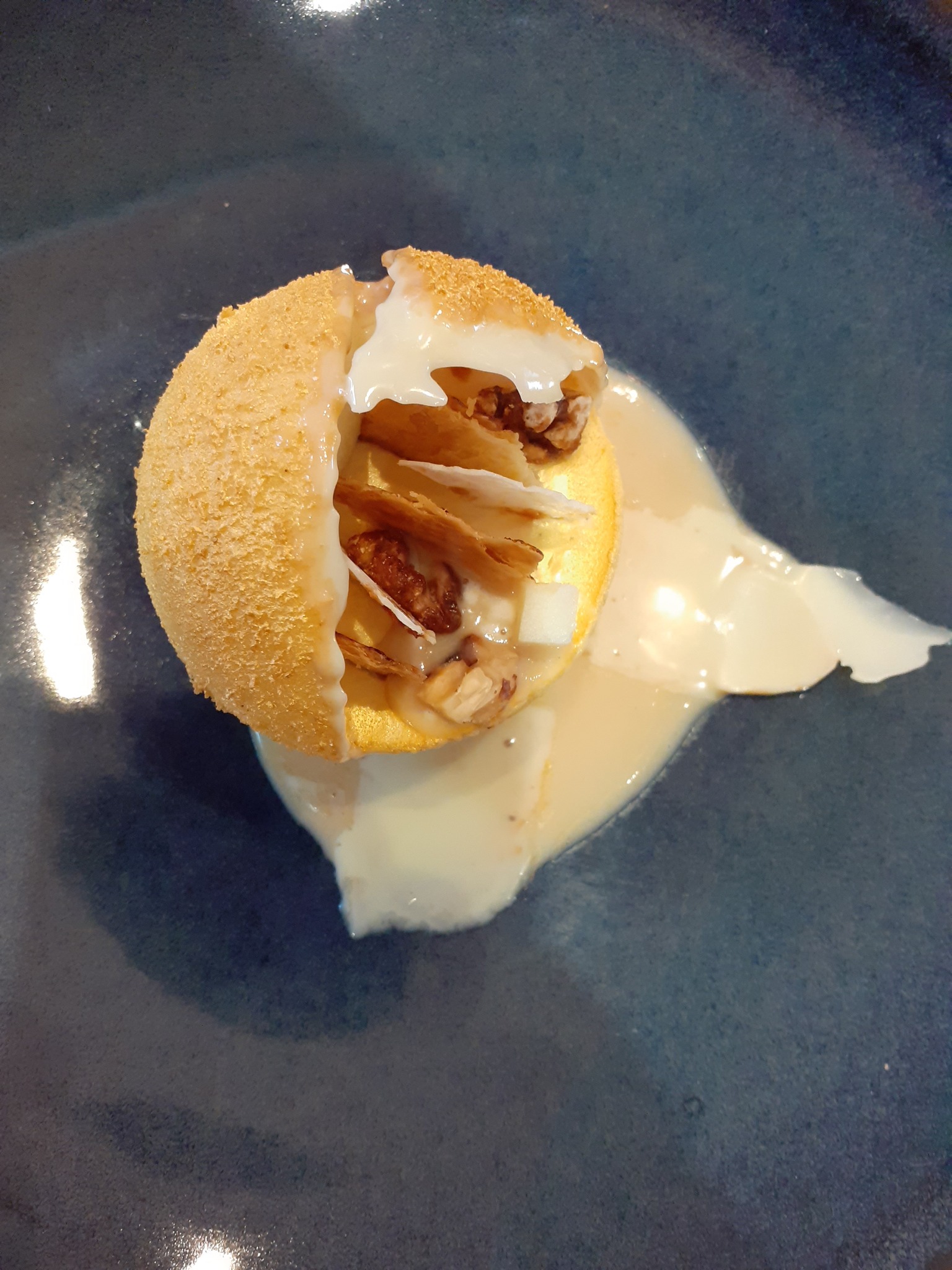 And then a different genre announces itself. The menu calls it a Warm Bramley Apple Pie, but is it? Part dessert, part deconstructed Death Star, this spherical mystery reveals its innards when custard pours over – and into – its delicate shell. Only The Emperor himself could have conceived this work of art. But there’s no dark side unless you count the calories.

There’s only one question left to answer. How can a chef who’s worked at Northcote for more than 20 years be such a breathtaking soul of reinvention? The force is with her. 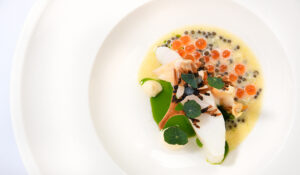 To find out more about Northcote and its spring menu, click here.