Sheridan’s classic 18th century stage comedy School for Scandal concerns a country squire’s daughter marrying into money and becoming embroiled in an elaborate web of vicious gossip cooked up by the wealthy folk she’s now hanging about with. All of which begs the question, why would anyone want to name a new restaurant after it?

Situated on Manchester city centre’s Jack Rosenthal Street a stone’s throw from HOME, School for Scandal has taken over premises which were formerly, if only briefly, occupied by The Launderette. It now presents itself as a ‘tattoo-inspired’ venue though this too suggests some previously undiscovered causal relationship between eating out and having ink pumped into your dermis.

Fair’s fair, it’s a pleasant enough joint with friendly, helpful staff, Jessie Ware and Ariane Grande playing loud on the sound system and a relaxed, casual if somewhat garish atmosphere where punters can lounge about under big wire-frame lightshades in velvety booths. Who doesn’t love a velvety booth?

Upon the walls, and indeed emblazoned across the servers’ t-shirts, are a selection of monochrome tattoo designs with messages ranging from ‘Trust No One’, ‘Love Kills’ and ‘Revenge is Sweet’, all the way up to ‘Hurt Me Once I’ll Kill You Twice’ and ‘You Should See the Things We Do Baby’. It’s very much that savage and cynical end of the tattoo world then, with no place here for ‘Kirsty 04.05.12’ or ‘Mum’. 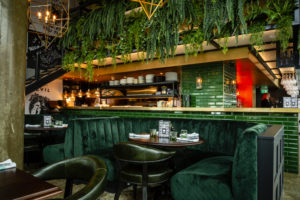 To the food itself. The menu is heavy on steak, pizzas and burgers, but the veggie options were good, and as a starter the edamame beans with a soy, ginger and sweet chilli sauce were simple and fine. The buttermilk chicken lollipops with lime mayo were dainty, delicious and moreish, albeit so unwieldy that they stretch the definition of ‘lollipop’. On this basis, the kids’ party classic ‘sausages on sticks’ just became sausage lollipops.

Of the mains, the Vietnamese crunch tacos with avocado, cashew nuts, quinoa, sweet peppers, coriander, Thai basil and lemongrass dressing were declared to be a disappointment, with few of that long list of elements actually coming through and making any impact. The steak frites was your basic flattened rump steak with skinny fries and bearnaise sauce. The sauce was splendid and buttery, and the steak was fine and tasty, though just veering towards being too salty.

The afters were pretty so-so, though. The sticky toffee pudding with hot toffee sauce and vanilla ice cream was overpoweringly sweet, stodgy and short on the date-flavoured undercurrent that you’d ideally want. The raspberry ripple cheesecake promised raspberries, candyfloss and cream, but we were blowed if we could locate the candyfloss which, to be honest, sounded like the most exciting bit. Like the lion’s share of the food here, it was perfectly fine but not much more than that. 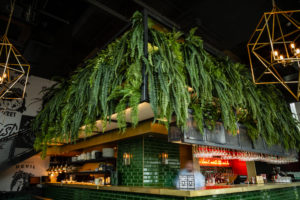 With several student super-residences in the neighbour, possibly School for Scandal is targeting a specific customer base (which might explain those ‘Lads’ and ‘Lasses’ toilets). It’s offering happy hour cocktails and Sunday roasts with live acoustic music sessions which could appeal to a younger clientele. During our visit a group in the foyer appeared to be having the time of their lives at a private pizza-making session.

It’ll have its work cut out avoiding the same fate as The Launderette but, for now, though the menu’s solid enough, it doesn’t feel particularly spectacular. As for that name, the suspicion lingers that they just called it School for Scandal because it sounded cool.