It’s a testament to Altrincham’s recent resurgence as a culinary hub that it can now support a whole range of decent restaurants offering cuisine of all kinds, from French and Thai to Indian and Lebanese. Tre Ciccio, which opened in 2016, adds another string to Altrincham’s bow: a good quality traditional Italian eatery.

It’s a deceptively capacious place, situated right in the centre of the town. Once inside the small shop front, there’s lots of seating down a spiral staircase, even leading out to a cool terrace dining area with a retractable covering and a leafy green canopy, though admittedly this conceals the big local Tesco rather than a town square in Tuscany. 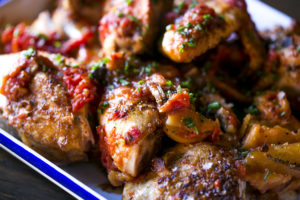 The emphasis in the menu is on authentic Italian dishes, and it’s surprisingly – and to be honest, refreshingly – light on yer lazy pasta staples, with nary a spaghetti bolognese, a macaroni cheese or a lasagne to be found. There are certainly pizzas though and plenty of them, but they’re done to a higher standard than most. The calzone napoletano, with salami napoli, prosciutto cotto and fior de latti cheese, was wonderfully light considering it’s essentially a big old dough triangle, and there’s real expertise in that balance of strong flavours within.

There’s also a hefty line in spicy roast chicken davola and potatoes, presented as an authentic Italian staple complete with a ‘secret marinade’. There are four options, and we went for the pollo con peperoni e carciofi – that is, with red peppers and grilled artichokes. Though undoubtedly moist and tasty, this didn’t feel all that special, and the marinade actually made it quite a greasy dish. Similarly, the friarielli – wild broccoli with chilli and garlic – was on the greasy side, which was a shame as the wild broccoli itself was pleasantly different and the chilli kick worked well.

Of the desserts, the torta al limone – lemon tart with raspberry sauce and lemon sorbet – had a thin, crispy pastry, but the lemon tart itself was a lot less citrussy than the sorbet and came off as a little uninspiring. The staff, who were unstintingly helpful and friendly, recommended the brioche con gelato, an unusual ice cream sandwich with a choice of flavours. We went for pistachio, and though a bun full of pistachio ice cream might seem like a curious prospect, it works, and it helps that it’s not too imposingly large. 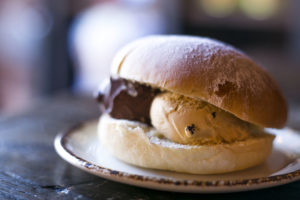 On balance, then, Tre Ciccio deserves to find its place in Altrincham’s new dining scene as it’s a buzzy, likeable place with character which does what it does very well. Arguably its specialisms are pretty narrow and inevitably they won’t be to all tastes. But for anyone seeking out a local Italian place hereabouts, there’s plenty to recommend it.