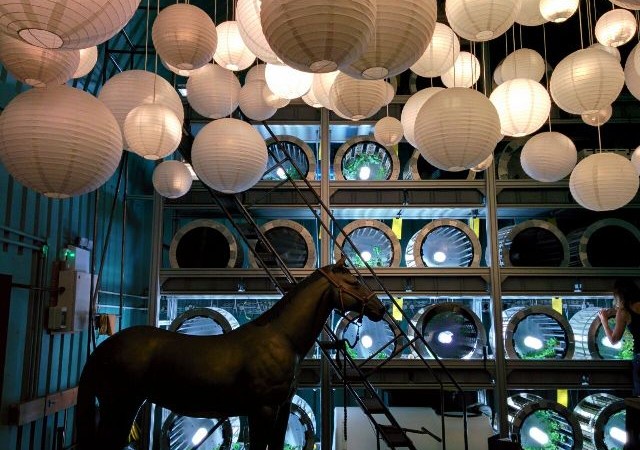 “I’m going to The Herb Garden on Wednesday,” I said to a friend. “Oh,” she replied, “I’ve been past there a few times. It’s the one with the rollerskating horse in the doorway, isn’t it?”

It does feel like any review of The Herb Garden has to start with a mention of the lifesize wooden horse in leg warmers and rollerskates by the front door. Is this the first restaurant I’ve been to with an equine doorman? Almost certainly.

The Herb Garden Pizza Kitchen is in what feels like an up and coming area of Newcastle: just by the Central Station under the arches of the railway line connecting Newcastle with our friends North of the border. It’s an area that’s seen restaurants, cocktail bars and a new hotel open recently, and is just a stone’s throw from the trendy Boiler Shop Steamer, a monthly event which regularly attracts thousands of people to watch live music, eat a variety of food from local independent restaurants and drink craft beers, all in the surroundings of the Boiler Shop, the birthplace of Robert Stephenson’s Rocket. It’s an area which I suspect is going to become increasingly trendy.

But back to The Herb Garden. Having made it past the rollerskating horse, the restaurant felt light, airy, and, in keeping with the name, horticultural. We asked about a wall stacked with large, illuminated barrels, something which caught the eye immediately. Contrary to our assumption that they were part of an art installation, we were told that they were hydroponic herb gardens. The herbs used in cooking the food at the restaurant are grown here, a nice touch and the result of which was evident in the freshness of the food. 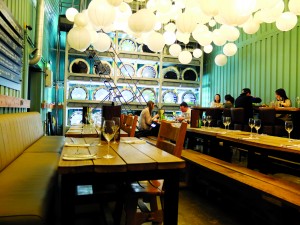 Meanwhile, the corrugated metal walls were painted a botanical light green and the wooden tables and exposed brick sections gave the place the feel of an outdoor environment. Juxtaposed with this minimalist approach were two spectacular chandeliers made from wine glasses hanging over the bar, while a cloud of round Chinese lanterns drooped down from the ceiling over the dining area (small but large enough not to feel crowded). All in all, the effect was quirky and surreal while also feeling classy and sophisticated.

We took our seats, and, looking at the extensive menu (cocooned in a glossy wooden case), I suddenly realised I was ravenous. First things first, though: cocktails. A number were named after Newcastle footballers. I went for the ‘Paul’ (Gascoigne: an edgy choice of name for an alcoholic drink, perhaps), a vodka and orange concoction, while Helen – Northern Soul’s Editor, up for a visit to the Toon from the Mancunian Northern Soul HQ – opted for an ‘Alan’ (Shearer, of course) with gin and blackberry. At this point, I must also admit that she was able to correctly identify all the footballers on the list from their first name quicker than I could, calling into question my pure-bred Geordie credentials.

Cocktails chosen, we moved on to pizzas. As a veggie I resign myself to often only having a couple of choices in restaurants, but here I was spoilt for choice. I eventually plumped for spinach, egg, pecorino, garlic, olives and basil – which costs a tenner – while Helen chose a four cheese pizza with Mozarella, Pecorino, Gorgonzola, Taleggio and Basil, coming in at £9. There was plenty of choice (including two vegan choices – unusual and sure to be much appreciated by Newcastle’s burgeoning vegan community), calzones, salads and antipasti. The Herb Garden is even open on a Sunday for Breakfast Pizza – a glorious hangover antidote. 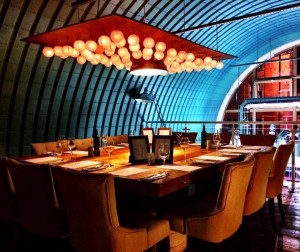 Man, these pizzas were big, and covered in thick, gooey cheese with generous toppings. Despite being ravenous, neither of us could finish them, although we both agreed they were delicious. I made a mental note to come back to try the Mozzarella, Blue Cheese, Truffle and Chive offering.

The Herb Garden staff were charming and chatty and it was possible to watch the chefs cooking the pizzas from scratch. Located at the arches since 2013, the restaurant has established itself as a place for excellent pizza in Newcastle. The Herb Garden is also available for private hire, with a secluded upstairs dining area for up to 14 people, which, we were told, comes with your own private waiter.

Herb Garden: I’ll be back. 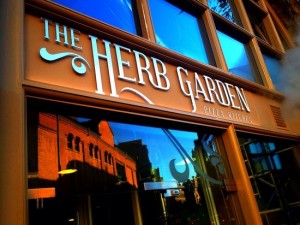