What a Norf and Sarf: returning to Holme Moss

Richard Dixon September 27, 2014 Northern Soul writes... Comments Off on What a Norf and Sarf: returning to Holme Moss 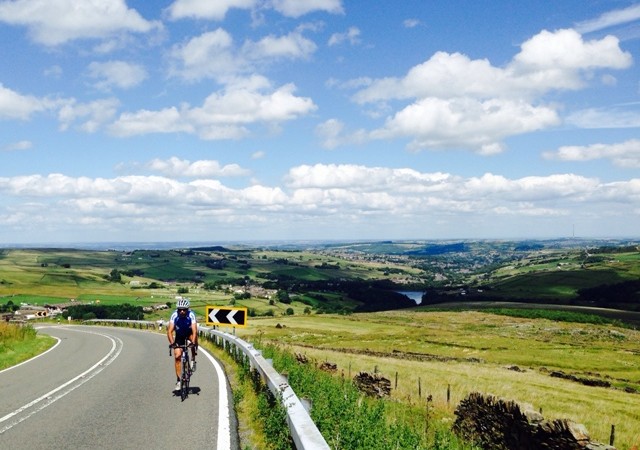 I’m an East London boy with strong Northern connections, proud and grateful about my maternal links to Manchester and the fine-tuning of my thought processes by a doctorate in Sheffield (fish glands, since you ask).

But with my freelance journalism and DJ outings increasingly concentrated in the capital and Home Counties, my forays up North are sadly far rarer than I’d like.

So it made a pleasant change at the tail end of August to be heading to higher latitudes, and not for the all-too-often reason in recent years of a family funeral.

A multiple-birthday party with friends and offspring in the sunny if breezy lowlands between York and Harrogate was a joyous occasion. Having driven up by the rather tedious A1, which is not improved by the Friday afternoon mass getaways from Sheffield and Leeds, the Sunday return journey was the perfect opportunity for a detour to feed body, mind and spirit.

First stop was the Tancred Farm Shop, just off the A59 amid level, lush fields and past the excellent Bay Horse Inn, in the village of Green Hammerton, which was my cosy base for two nights’ stay.

The Hullah family’s emporium has a fine and wide selection of reasonably priced produce, but the undoubted centrepiece is the butchery counter, and samples of belly pork, home-made sausages, black pudding, bacon and pancetta were gladly purchased for closer inspection and enjoyment on the plates back home.

Next on the itinerary was a meander through the more rolling North Yorkshire countryside further up the River Nidd, via the picturesque town of Knaresborough and village of Ripley. The goal was Pateley Bridge, in Nidderdale – a Yorkshire Dale although not in the national park. 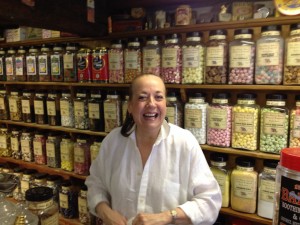 I’m not exactly the world’s greatest shopper, but I can report that the town is home to one of the most evocative examples of retail therapy I’ve ever experienced. Established in 1827, The Oldest Sweet Shop in England is officially that, according to Guinness World Records.

If you can’t visit in person, its thriving online trade will serve you well, but you will miss out on watching Gloria Tordoff, one of the proprietors, beaming with delight as she weighs out your bag of Pontefract cakes or sherbet lemons.

I left with a lovely tin of Kendal Mint Cake, a sugary delight that accompanied Sir Edmund Hillary and Sherpa Tenzing Norgay on their conquest of Everest in 1953. But it was my other purchase, a quarter of aniseed balls, that helped in my more modest climbs at the wheel of a seven-seater from Pateley Bridge, via Bradford and Huddersfield, and the ultimate ascent of this trip: Holme Moss.

This splendid vantage point, just inside the Peak District National Park and 1,719ft (524m) above sea level, holds a special place in my affections. The summit was one of the star attractions for the Yorkshire part of the Tour de France in the summer.

Holme Moss is easily seen from miles around because it is the site of the highest transmitting station in England, with the aerial another 748ft high.

Built in 1951, the transmitter is one of my personal Northern landmarks. Only three years older than me, it would be often remarked on when we took family drives on Sunday afternoons in my childhood from the North-East of Manchester, where my grandparents farmed, across the county border into White Rose territory. 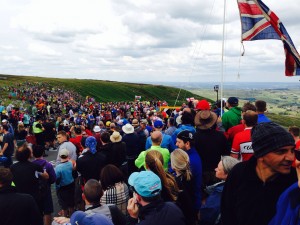 It gained yet more significance for me when, in what is now called a gap year, I worked for nine months in the BBC engineering department in London from Christmas 1972 and was involved in reordering the storage and repair of historic drawings, including those for Holme Moss.

I returned to the job for several years during university vacations, and had it not been for the challenge of a PhD offer that I felt I could not refuse I might have joined the Beeb as a graduate trainee journalist. Lo and behold, 40 years on I now freelance regularly for the BBC News website after a working lifetime in print journalism.

Holme Moss speaks to me of intrepid engineers designing and maintaining a structure in a wild and woolly Northern bastion so that, as the BBC motto has it, “Nation shall speak peace unto nation”. I cherish Auntie, despite her somewhat flawed and tarnished image.

An uncle, a cousin, my sister and countless friends and acquaintances have worked for or been on the BBC. Even I have appeared just a very few times: on local and national radio, and – bizarrely in the light of subsequent events – as a fleeting teenage extra in a television documentary about Jimmy Savile, portraying the peroxided man from Leeds as the very model of a religiously motivated do-gooder.

Now, four decades on, I work from time to time at the corporation as a freelance journalist, editing stories and even handling complaints.

Those of us who spend a lot of time editing others’ copy tend to have magpie minds. And so it may seem odd but the combination of the view from Holme Moss and the rediscovery of a childhood taste-and-feel sensation, with an aniseed ball slowly turning to sweet powder in my mouth, brought back these Northern memories.

Richard Dixon, who admits to a mild Twitter obsession, is a freelance journalist @linguagroover and DJ @MLKSoundsDJ based dahn sarf.

Tags: Holme Moss, Richard Dixon, What a Norf and Sarf