From the very start, it’s drenched in mystery. The introduction shows the playable main character, the Drifter, wandering a post-apocalyptic wasteland, accompanied by some sort of dog which he follows into a cave, before being consumed by darkness. The game then begins, placing you in the wasteland. The beautiful pixel graphics, which turn a dark background into a work of art, are immediately entrancing and are one of the main appeals of the game.

In the story itself, you’ll find yourself being knocked out by monsters, saved (and abandoned) by enigmatic figures and exploring the central town, where you’ll spend 70 per cent of your time – mainly because it’s your last save point and you forgot to save before you went wandering into that extremely dangerous dungeon. 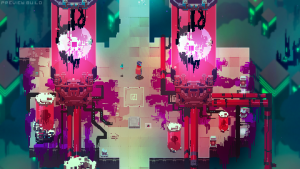 Within the game, NPCs (non-player characters) talk in noises or through comic book panels which tell their story. Impossible dungeons, exploring for upgrade coins and even fighting hordes of monsters can begin to try your patience, but after a bit of wandering you may come across a new sector of the map, or perhaps a fearsome ‘boss’. The former is a wonderful treat. Here you’ll find new enemies to beat up (or enemies who will beat up you), new health packs which are extremely useful for later, and new secrets such as coins, guns, and powers.

The bosses, though, are really incredibly tough, albeit brilliantly rewarding. They’re a challenge, as they should be. They’ll take your dodging and hitting skills to the limit, but when one is killed, you feel amazing. The only thing that ruins that outburst of joy is realising that each successive boss gets considerably harder.

It is, in a way, a confined open-world game, but without wandering and upgrading you would be nowhere. None of the bosses can be beaten without upgrades, so prepare before you start a boss fight. Preparation is extremely important, and it stands among the core features of the game, along with practising, fighting bosses, learning from your mistakes and fighting more bosses. 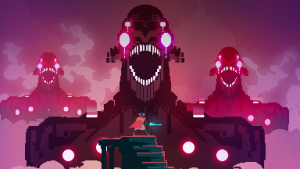 Overall, Hyper Light Drifter is probably a one-time playing experience. Chances are you’ll pour hours into it, because not beating it and ‘just giving up’ isn’t really an option. The controls (drifting, attacking, shooting) function so seamlessly that the desire to pull off a non-perfect action sequence will make you want to try again and again, so you don’t have to use one of the extremely rationed health packs, and so the enemies in the next room will not have the upper hand in absolutely obliterating you. You’ll want to make your character fit into that amazing pixel art world and you’ll want to make your action sequences a work of art too.

This game as a whole should not be taken lightly. It feels like Dark Souls wearing a Link mask. It lures you in with free rupees and then forces you to fight impossible bosses until the end of your days. The crazy thing is, you’ll actually really enjoy it.

By Michael Murray, aged 12 (and edited by his dad Andy Murray)

For more information or to buy Hyper Light Drifter on Steam, click here.