Drew Tosh October 24, 2020 Arts, Comedy Comments Off on “If you can make people laugh you can make them do anything.” Comedian Paul Holliday talks to Northern Soul 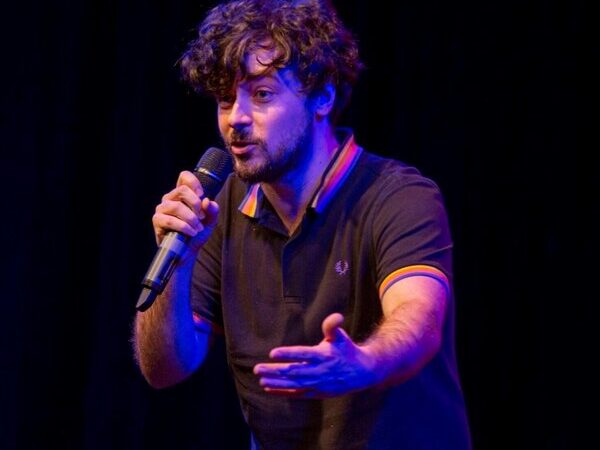 W.C. Fields said that “comedy is a serious business”. He knew what he was talking about. Breaking into the industry can be a long slog of late nights and incredibly hard to please audiences. Can you imagine anything more stomach-churning than standing in the wings (or more likely, by the gents’ toilet) of a rowdy social club, waiting to tell jokes to a baying crowd?

Paul Holliday is at the beginning of his stand-up career. Already a comedy actor and writer, he realised that being able to diversify into other areas was the best way to help get his name out there. His first stand-up gig, however, was a major reality check.

“I used to flat-share with a comedian who pushed me to do stand-up,” Holliday says. “He’d learned the craft on a two-year comedy course, but I didn’t understand the concept of it or how to write a routine with proper jokes. My first gig lasted less than two minutes and was horrible. That’s when I realised, I needed to know the basics.”

Speaking in public is listed as one of the most stressful things you can do. Throw making people laugh into the mix and it’s obvious that a comic needs to have some major kahunas.

“I guess so and it’s certainly nerve-wracking, but you have to get used to it,” laughs Holliday. “I drink loads of water when I’m waiting to go on because my mouth goes so dry with nerves. I put that pressure on myself but when I realise it’s just about making people laugh, I start to enjoy it. If they don’t laugh, so what? It’s just not your audience. A lot of the top comics still have tough nights and bad gigs. It’s not the end of the world.”

He continues: “I did a gig in an area I’d been warned was pretty rough. Loads of people were stood at the back of the club talking loudly and the comics on before me had really struggled. I nearly ran because my routine involved re-doing Harry Potter as a Scouser, so there seemed no way it would go down well. I started by asking if anyone liked Harry Potter and some woman yelled ‘no!’ By the end, though, they were really laughing and gave me a big round of applause, so you can never predict how people will respond. That’s one of the interesting things about doing it.”

Performers are coming up with more creative ways to counter the devastating effects the pandemic has had on work opportunities. You’d imagine that the insanity of 2020 offers a comedian a rich seam of humour to mine, but Holliday isn’t so sure. 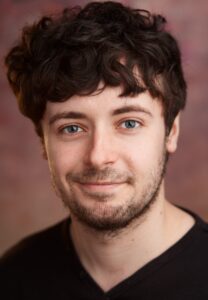 “Unless you come up with a corker of a gag, it’s better to curtail COVID-19 stuff because everyone else is going be doing the same thing. Also, people see comedy as escapism, so you don’t want to focus too much on what they’re escaping from.

“There’s been an upside to lockdown for me, though, because it’s given me the chance to work on more projects at the same time. When you’re in your day job, it’s hard to have the energy to do much afterwards. If I’m writing a screenplay, I need to be 100 per cent in it over a concentrated period of time rather than stop/start as that risks the writing becoming disjointed. Being furloughed has been the perfect time for me to focus on creative stuff.”

For many comics, discovering the ability to be funny begins in the playground as a coping mechanism to survive or to compensate for a lacking in some other area. Is that the case for Holliday?

“I was always quite shy at school and so comedy was how I was able to fit in,” he admits. “I’ve always been naturally good at doing and writing funny things. I was leaning more towards doing straight acting but comedy kept coming up. I was doing drama and theatre at uni, but they also had a comedy course and people just assumed I was on that. I also kept getting typecast in comedy parts and they seemed to go down really well. When starting out, you need to find a route and stick to it, so that’s why I decided to develop the comedy.”

I have always thought being funny was a natural talent and you’ve either got or you haven’t. Comedy courses are cropping up more and more these days, but can you really learn how to be funny?

“I think it’s a bit of both,” says Holliday. “You can be funny in the pub but if you want to develop that gift you need to learn the craft. Some comics make it look very easy on stage, but they’ve put years of work into it over hundreds of nights of gigging and honing their material.” 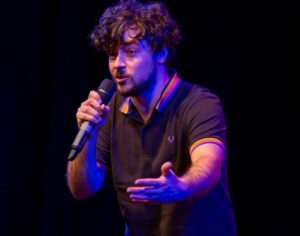 Manchester-based Holliday is a proud Liverpudlian, an area with a long history of producing hugely successful comedians. Is there an added pressure to live up to the city’s comedy heritage?

“I don’t put pressure on myself. When I lived in Liverpool there were many, really funny people with that dry sense of humour, but you also get others who assume that being Scouse is all you need to be hilarious. The heritage can play against you. I’m still learning as a stand-up but being a comic actor helps because I’m used to performing in front of audiences. I can write jokes, but I don’t really know what my persona is yet. It’s often a heightened version of yourself. When that clicks, that’s when comedians really take off.”

Holliday enjoyed his first taste of stand-up success just before lockdown and also has a raft of other projects underway.

“My stand-up won the Frog & Bucket’s Beat the Frog competition in January 2020, so I’ll be in the series heats once they get start up again. I’m also doing a comedy sketch show at The Lowry and my online character sketches are constantly developing. I’m filming a new one with a cast, director and crew in October for release in December. Being able to film yourself gives you independence from the need to have a live audience.”

Holliday adds: “Since lockdown, it’s more important than ever to have a social media presence. You have to make a name for yourself beyond just doing the gigs. I can write and create and work with other people. I’m writing jokes every single week, so it becomes the norm though it’s harder to write shorter stuff.”

The dreaded ‘blank page syndrome’ can be a tough obstacle for many writers but for those creating comedy it can be even harder. Holliday has his own methods to keep the ideas flowing. 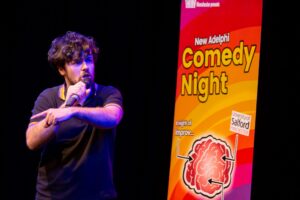 “One of the best ways is to meet up with someone and just talk with them,” he explains. “A lot of the time you get the funniest ideas when you’re not constantly thinking about it. People struggle to be funny when they concentrate on it too much.”

Comedy is in an extremely healthy state these days, thanks in no small part to the endless stream of TV panel shows that help comics to gain a following. Holliday names Mo Gilligan and Karl Porter among his current favourites but stand-up success isn’t his only career goal.

“I’d like to write my own sit-com and work up the material in my stand-up routine,” he reveals. “Ultimately though, I want to establish myself as a comedic actor, even moving into more serious work. A lot of comics do that very well. If you can make people laugh you can make them do anything. Comedy is just being honest, so that should make you a great actor. Jim Carey and Steve Carrell have done it and I think it’s testament to how good an actor is if they can switch between the two.”

Follow Paul Holliday on Instagram or Facebook. Due to the pandemic, dates for the sketch show at The Lowry are still to be confirmed. Check thelowry.com