On a cloudless June day in Newcastle, the news sounded like a church bell: unable to secure an extension of its lease, Intermezzo Coffee Bar is to close in April 2016.

My social media feed went into an immediate frenzy of despair. “This place made Newcastle feel like an exciting place to be”, came one wistful comment; “Newcastle without Intermezzo can’t be the same,” another. The consensus was absolute. The closure of Intermezzo is, for all those who frequent it, heart-breaking. A particularly astute, summative comment on the Facebook page simply read: “You guys make that pissy side street into a slice of cool Mediterranean culture”. Questo è vero.

Sitting in said pissy side street that night in the late evening sunshine with a friend, we sipped our flat whites in funereal silence. Strains of some undefinable jazz drifted into the balmy summer night from inside the bar. Coils of cigarette smoke floated by from the impeccably dressed and impossibly glamorous couple deep in conversation at the next table. Opposite, a besuited older man sat alone with a glass of wine, his briefcase propped against the wall as he intently read a newspaper; two tables down a group of Spanish students were sharing a latte and talking excitedly, their staccato voices filling the air and transporting me instantly to the warmth of Murcia. We stared, miserably, at the cold puddles of coffee wallowing in our saucers. “Well”, I said, at last, “I guess this means we’ll be leaving Newcastle”.

For those unfamiliar with the geography of Newcastle’s bars and cafés, Intermezzo is the coffee bar attached to the Tyneside, Newcastle’s much-loved independent cinema. It occupies the ground floor of the side of the building and is a long, skinny room with red, faux-leather seats and stools lined along the window, overlooking a narrow alleyway that connects Pilgrim Street and the central Monument area of the city. 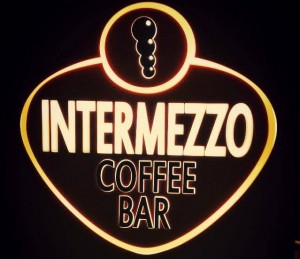 It serves great coffee; it serves good cake; it serves gin that is, well, gin. It’s pretty much as simple as that, and yet somehow it’s not that simple at all. It is, for me, the heart of Newcastle. I have spent countless hours in here: alone, with a book and a coffee (more frequently a glass of wine during that particularly long summer after I finished my undergraduate degree and decided to read everything by Graham Greene), with a Peroni and friends before catching a film, with a pile of shopping bags and a much needed restorative cup of tea, or even with cocktails before heading out into the night. It’s always the first place I take a visitor to the city because it shows off Newcastle in its best, cosmopolitan light – a city that can stand its own with London, Edinburgh, Glasgow, Manchester.

Intermezzo achieves a rare blend of sophistication perfect for meetings and business dates, and is also laid back enough to enjoy a spur of the moment glass of wine in the afternoon. As the Facebook comment quoted above implies, it even manages the remarkable feat of turning a smelly back alleyway in Newcastle into a glamorous backstreet of Barcelona. Sitting outside on a warm spring morning, or inside on a freezing November night, it suddenly doesn’t matter that the double decker buses spluttering by on Pilgrim Street are going to Dumpling Hall and Four Lane Ends and places with ungainly names instead of to the outskirts of Roma. It doesn’t even matter that sometimes – and yes, I have seen this happen – people urinate against the wall further down the alleyway, because something peculiar happens once you buy a drink and sit down, and the cares of the grey old world are suddenly a million miles away. This isn’t Cameron’s Britain in 2015: this is Paris in the roaring 20s. At any moment the door may be pushed open and in might stride Gertrude Stein or Ernest Hemingway for a Jack Rose cocktail and an intense conversation about the nature of art, goddammit. A tad unrealistic, you say? It feels as though it just might happen. This is one special place. 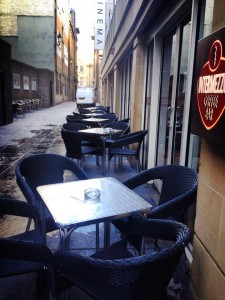 To say that a city will no longer be the same after the closure of a coffee bar might seem like an overstatement, and such a real and visceral outpouring of grief an almost embarrassingly adolescent overreaction. Thinking about it rationally, it’s not all that bad. The owners have plans to relocate to another premises, while Tyneside Cinema plans to take over the existing space and continue to run it as a coffee bar. And it’s true that there are other quirky places to grab a coffee, cup of tea and bite to eat in the city centre and surrounding suburbs. The excellent Quilliam Brothers Tea House, for example, which opened in 2013 and provides a space for arty students, loafing poets and university lecturers to try out one of hundreds of different varieties of tea while lounging on super-comfortable beanbags. Tea Sutra, a speciality tea house serving vegan treats, meanwhile, boasts a floor cushion platform so comfortable that I’ve seen people fall asleep after the particularly potent Valerian Root tea they serve up in delightful, elephant-shaped tea pots.

Fabulous as these places are, they don’t quite capture the heart and the imagination the way that Intermezzo so clearly has for so many people, and it’s hard not to feel like its closure is somehow symptomatic of a much bigger change happening in the city at the moment. New chains are moving in and taking over. In recent months, Newcastle has seen the opening of a Jamie’s Italian restaurant, The Botanist, a Dr. Marten’s store and a Jack Wills. Next in line is the redevelopment of the Eldon Square area around Monument, which will see more than 20 new restaurants and eateries open with terrace seating overlooking the stunning Grey Street. 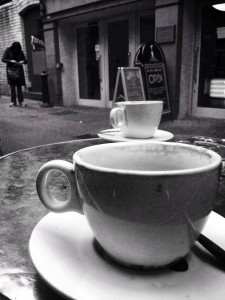 Wandering through town with a friend who had not been to the city centre for some years, she remarked how different everything was, how much Newcastle seemed to have ‘caught up’ with its bigger, more sophisticated neighbours. The redevelopment and rebranding of Newcastle, desperate to shake off the boozy legacy of the notorious Bigg Market, is a confident battle cry to our Northern counterparts. Smaller than Sheffield, Manchester and Liverpool – with more than 100 miles between Edinburgh to the North and Leeds to the South – Newcastle now confidently jockeys for position as a shopping and dining mecca.

It doesn’t seem to matter that the ‘Green’ (a square of grass where for decades the ‘alternative’ teens of the city used to meet and to shock in fishnets and safety pins) has been paved and taken over by pigeons, and that the vintage shops on Highbridge Street (in which I once earnestly tried on brown winklepicker stilettos with bald soles and paisley pussy bow blouses, all of which made me look like an extra from The Good Life) have closed down. 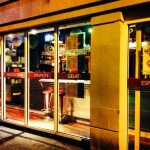 Newcastle boasts a shiny Apple Shop and a beach hut Hollister, a Cath Kidston store and an Urban Outfitters. Perhaps these things are now the essential consumer touchstones that a city needs in order to continue to attract new generations of shoppers and to ensure that the city continues to grow and to thrive. The problem, however, is that these places are invariably the same from one city to the next. Among a sea of homogenous Starbucks and Costas, small, independent places that burst with character like Intermezzo are vitally important, and perhaps this goes some way to explaining the outpouring of grief when news of its closure broke.

The passion of both the people who work in Intermezzo and those who frequent it is undoubtable. Whether it can replicate its success in a new location remains to be seen but, wherever it may end up, I will be there in a Breton top, coffee and good book in hand, and I’ll be hoping beyond hope that it continues to thrive and inspire new customers in the way that it has so powerfully inspired me. Intermezzo is dead: long live Intermezzo. 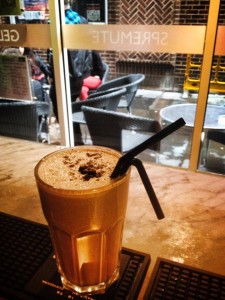