Dan Dare is back: we chat to the brains behind the revival of the sci-fi classic

Andy Murray July 19, 2017 Northern Electric, Northern Soul writes... Comments Off on Dan Dare is back: we chat to the brains behind the revival of the sci-fi classic

The North of England may not exactly have been the epicentre of the 1950s space race, but it did have its moments. In the Cheshire countryside, the mighty Lovell Telescope was constructed to look for signals among the stars. On television, extra-terrestrial threats were combated by Professor Quatermass, from the mind of Cumbrian-born writer Nigel Kneale. Meanwhile, young readers of the weekly Eagle comic were thrilling to the adventures of Dan Dare, Pilot of the Future, drawn by a team of artists based in Southport, led by Audenshaw boy Frank Hampson.

Dan Dare became an icon of its era, running until the late 60s and spawning a popular radio series along the way. Down the decades since, the character has been revived several times in comics, but with limited success. Many have tried to adapt it for film or television, though only a little-seen CGI cartoon version made it through. Now, B7 Media, in association with Big Finish Productions, have launched a brand-new audio drama version, starring Ed Stoppard as the redoubtable Dare, Geoff McGivern as his right-hand man Digby and Heida Reed as their trusty ally Professor Peabody. 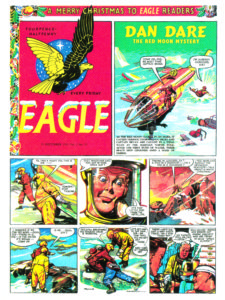 The project has been masterminded by producer/director Andrew Mark Sewell, who was all too aware of the pitfalls of reviving Dan Dare. Sewell tells Northern Soul: “When we approached this, we were very mindful of the fact that we had to embrace the essential spirit of why Dan Dare was so successful back in the day, but at the same time we had to find a way in which to update it and modernise it, to make it relevant for an audience today. That was our prime concern. So we had to get rid of the old-fashioned stiff upper lip quality, the analogue levers. Also, our awareness of the solar system is so much more informed now than when Dan Dare was first created. Having said that, it’s extraordinary how some of the visionary depictions of space exploration in the comics have actually played out to be real and we’ve embraced that.”

Sewell explains that the new audio stories are aiming for a near-future setting rather than some kind of 50s flavoured retro-future.

“My feeling was that Dan Dare was of its time in terms of when the character was created back in the 1950s, but it’s kind of become of its time again now with Tim Peake. He’s re-ignited the romance of space for people. I felt that we had to actually do something which was fast-paced, in many ways like what Steven Spielberg did with Indiana Jones, which was very influenced by 1930s action-adventure serials like Buck Rogers and Flash Gordon. He took the key components and made a rollicking daring-do adventure. I think people want a sense of optimism and heroics, so it just felt right to do Dan Dare again now.”

B7 Media has something of a track record with rebooting sci-fi classics. The company started out with a new audio version of Blake’s 7, which gave the firm its name. Subsequently, they produced a Radio 4 adaptation of Ray Bradbury’s novel The Martian Chronicles starring Derek Jacobi and Hayley Atwell.

“Again, that was written in the 1950s but we updated it and made it modern,” says Sewell. “We treated it as if we were in a parallel world, so yes, there could be civilization on Mars and so forth. We took the same approach with Dan Dare. The thing is, to be brutally honest, whilst I would have loved to have done a Dan Dare television series, the rights are tied up. But radio just feels like its natural home in a way and I do love radio. I love the intimacy of radio and the scope, the ambition and the boldness that you can adopt with it.” 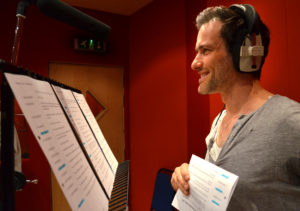 Sewell likes to think of B7 Media’s output as ‘audio movies’. “We take a very cinematic approach. Actually, I remember watching the Guardians of the Galaxy movie, which in terms of its origin was a little-known comic coming out of the Marvel stable. So, I went in with no expectations, but I came out with a spring in my step and I thought ‘now I know how to do Dan Dare’. So that’s how we approached it, by adopting a sort of cinematic tone, in the way that we designed the soundscape and the economy with which we wrote the scripts and told the stories. They are inspired by the comics, but they’re original stories in their own right.”

Indeed, the two audio adventures to have been released so far, Voyage to Venus and The Red Moon Mystery, are pacey, thrilling riffs on the original comics yarns. Dare’s arch-nemesis, Venusian overlord The Mekon, is present and correct, as portrayed by Raad Rawi. There’s also an extra layer of back-story and intrigue. In a nice touch, the off-world expeditions of Dare and co are now funded by the shadowy Eagle Corporation, and there’s an ongoing mystery about the fate of Dan’s space-faring father (who, perhaps wisely, isn’t referred to as ‘Dad Dare’). 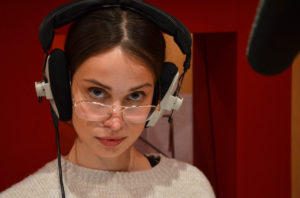 The Eagle incarnation of Dan Dare is imperishable, but it could be argued that it stands or falls on its artwork and storytelling, rather than its sophisticated approach to character development. In rewiring it for the 21st Century, that’s one factor that Sewell and his team have had to address.

“Traditionally, comics didn’t adapt well into other mediums. It’s only recently that they’ve started to really get how to translate comic book characters and make them real. And I think that’s the key – to make them real, to be truthful to them. However fantastical the scenario, make sure you’re rooted in a recognisable reality. But with the characters of Dare and Digby and Peabody – I mean, Peabody, even back then, was a strong woman. So, we had a very good template to work from.”

In terms of the target audience for the Dare adventures, Sewell says this: “I hope that it will appeal to a family audience. I mean, I’ve got two teenage sons who don’t generally listen to radio. Initially, obviously, I forced them to sit down to listen to it. But they stayed put and they said, ‘we wouldn’t normally listen to this kind of thing, Dad, but we really enjoyed it’. It’s just fun storytelling. It embraces that sense of wonder and adventure. I hope that the old school Dan Dare aficionados will like it, too. There’s still an Eagle Society and actually we went in to do a talk for them. I did go there with a certain amount of fear and trepidation about how they would react. And initially they were very suspicious, but they loved it.” 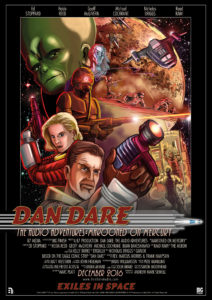 Dan Dare – The Audio Adventures Volumes One and Two are available as either a CD Box set or a digital download via dandareaudio.com. Click here to view the teaser trailer.

Thought for the Day: "I've always got my energy from being alone in order to go out in the world and be social." - Tuppence Middleton