“We all benefit when we embrace diversity and allow everyone to contribute.” Northern Soul talks to June Sarpong

Mike Fotis October 10, 2017 Authors & Reviews, Books Comments Off on “We all benefit when we embrace diversity and allow everyone to contribute.” Northern Soul talks to June Sarpong 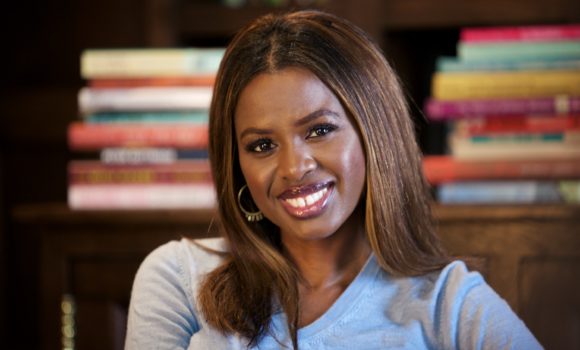 It’s Friday lunchtime and we’ve bagged 20 minutes with June Sarpong. With only six questions written down, I’m counting on Sarpong being in classic T4 chatty mode. Luckily, she’s not down for disappointing and, after all, she “loves a bit of Northern Soul”.

We’re talking to Sarpong as she’s got a book to promote, Diversify, and is due to speak at the Durham Book Festival. But it doesn’t take much poking around to figure out that we’re a million miles away from a pocket-a-quick-pay-cheque celebrity vanity project.

At the ripe old age of 40, Diversify feels like her life’s work. It’s a passion project that draws from some deeply personal experiences and has been brewing for some time. It’s been given added urgency with Trump in the White House and Brexit on the cards (Sarpong was a leading figure in the Britain Stronger in Europe campaign).

Diversify is a “multicultural lean in”. It focuses on how society can move beyond cultural divides and the unconscious biases and ‘isms’ that impact our daily lives. It aims to spark the type of uncomfortable conversations that society tends to shy away from. “Issues around race, prejudice, intolerance and inequality in general” are all long overdue a better airing. “When you can identify your own isms,” says Sarpong. “You can check yourself.”

Sarpong boils down the message behind Diversify as “we all benefit when we embrace diversity and allow everyone to contribute”. But to make this happen, we’ve also got to “change the narrative and language we use”.

She adds: “If most of us do some sort of othering then it’s time we start to erode the walls that have been built up.” For Sarpong, the lack of honest dialogue around these sensitive topics has helped to “hold back society from reaching its full potential”.

“It breaks my heart that many people go the grave without delivering their full potential,” she continues. “It might be that a boy in Peckham has the cure for cancer, and we never know. What we’ve done before is cherry pick from around the world. But the next step is to make people here be their best selves.” 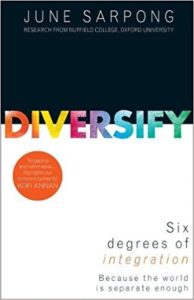 It’s an inclusive but challenging message that asks us all to examine what have become deeply uncomfortable and highly emotive issues. It’s also a wake-up call for those in positions of power and influence that have, to date, done OK by upholding the status quo.

“Brexit has shown us that all is not OK,” she says.

Sarpong is a well-known Labour supporter, but “not necessarily of Jeremy Corbyn”. She is, however, enthused by his inclusive approach, and the way he’s energised young people, who “help to move each generation forward”. And it’s this energy that Sarpong hopes to galvanise to help us “reach our potential as a society”.

If Diversify’s universal narrative is “humanity and love”, it’s also a compelling mix of moral, social and economic arguments, which draws on research led by Professor Anthony Heath of Oxford University.

So, what comes after the book?

“The aim is to become a movement. And keep the dialogue going. By building a pipeline that delivers more diverse talent, we’re doing everyone a favour.”

Sarpong has been widely quoted as saying she doesn’t believe women can have it all but, while we talk, she clarifies that women can’t have it all “at the same time”. And this is the bit that I find truly fascinating.

Because what’s really at play is an enormous and ambitious vision delivered by a highly disciplined messenger. Sarpong swings comfortably between game-changing universal narratives, and the cold reality check that means she’s learnt there are limits. She wants to help change the world, but at the same time she’s figured out that you can’t have it all (at least not all at the same time).

So, can June Sarpong kick-start a revolution with Diversify?

The first uncomfortable truth is that we still need to sell the power of diversity in 2017, but there’s little doubt that the timing is on point. And I certainly don’t have the balls to bet against her.

June Sarpong will be appearing at the Durham Book Festival on October 15, 2017. For more information or to book tickets, visit the website.

Diversify is published by HQ and is released on October 19, 2017.

The exhibition explores the memorials and rituals that surround the war and how they have influenced our perception of later conflicts.

Artist David Dunnico has created War Work, a new exhibition at @AIRArtGallery, to coincide with the 75th anniversary of the end of the Second World War. Click the link below to view the full gallery: northernsoul.me.uk/image-gall… pic.twitter.com/FVMBArHmkF

MANCscapes: urban scenes and cityscapes by artist Sue Scott @slscottartist Click the link below for the full gallery of images: northernsoul.me.uk/image-gall… pic.twitter.com/QQCMGWliqL