“When I look back at my records, I see it as like making movies or building houses.” Northern Soul talks to country music legend, Marty Stuart

Kevin Bourke October 10, 2017 Bands & Gigs, Music Comments Off on “When I look back at my records, I see it as like making movies or building houses.” Northern Soul talks to country music legend, Marty Stuart

“I guess you could say that my mom set the standard at kind of an unattainable place,” says Marty Stuart, one of the undisputed heroes of modern country music. He’s talking about the fact that his mother gave him that first name in homage to the great Marty Robbins, the epic balladeer who made the old West come to life with songs like El Paso.

“The first picture of me, that I know was me, was in the crib wearing a pair of cowboy boots. My mom also took a picture of me when I was five with my first guitar. I look at that picture, and then a picture of me now, and nothing has changed – same clothes, same guitar, just another year.”

Stuart, who makes a rare appearance in Manchester at the Royal Northern College of Music (RNCM) on October 10, has spent more than four decades celebrating American roots music as a musician, songwriter, country music archivist, and photographer in a career including five Grammy wins, Platinum record sales, and Grand Ole Opry stardom.

At the most recent Americana Music Association Awards in Nashville, Marty Stuart And His Fabulous Superlatives won the Best Group gong (there’s no award for ‘Best Name’, more’s the pity).
“At the end of the day, as far as I’m concerned, I’m a country music singer, a country music guitar player and a country music songwriter. Whoever reaches out for me beyond that, like the Americana community, that’s fine, you know?”

Stuart arrives in Manchester in the wake of one of his best albums, Way Out West, which he describes as “a love letter of sorts to the West – a psychedelic, twangified journey through the American West”, while latecomers can catch up with some of the best of his output on Humphead Records’ just-released Now That’s Country – Definitive Collection Vol.1.

He has acquired a remarkable collection of country memorabilia over the years “and a big fat insurance bill to prove it. That’s why the Country Music Hall of Fame has so much of it,” he laughs. But he has been determined throughout his career to not only show love and respect for the tradition, but also to push it towards the future.

“The thing about tradition and history is that it can serve you as a guide, or it can box you in and imprison you,” observes Stuart. “I do not go to that end of things. I’m inspired by tradition and I feel like it tells me where to go, but it’s not that precious to me to get bound up by it.” 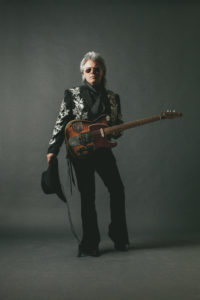 Obsessed with country music, Stuart taught himself how to play the guitar and mandolin, and by the age of 12 had started performing with the bluegrass group The Sullivan Family. Country music legend Lester Flatt heard the young prodigy and invited him to join his group in time to appear on the final episode of the fifth season of legendary TV series Hee Haw. A few years later, when failing health forced Flatt to break up the band, Stuart worked with fiddler Vassar Clements as well as guitarist Doc Watson, before he joined Johnny Cash’s backing band.

“Man, when I was 13-years-old, I started at the Grand Ole Opry with Lester Flatt,” he marvels. “I didn’t drive, of course, and so I lived out at Lester’s house. All of a sudden, my peers were Ernest Tubb and Roy Acuff and Bill Monroe and Earl Scruggs, the people that virtually invented country music. They treated me like family, they took care of me and they passed their wisdom and their songs and their stories on to me.

“That was an awesome thing but it struck me that, man, you know, that’s not for free. Your turn comes to do that sort of thing for young people as well. So, my wife Connie [Smith] and I really, really champion young singers, young songwriters, young musicians, and anything we can do to pass it along and move the story forward, we’re going to do that.

“The West,” he points out, “has always been this place that was a whole other world to me. Growing up in Mississippi, the first record I ever had was The Fabulous Johnny Cash. There was a song on it called Don’t Take Your Guns to Town that I did as a pantomime ‘show and tell’ in first grade. I have just always been a fan of that culture. Then, the first song I ever played on guitar was I’ve Got a Tiger by The Tail. All of a sudden, all of the Bakersfield stuff started to get me, and then I started to research, and just about everything that I loved came from the West.”

Then, he recalls, “my wife and I went to see Jerry Lee Lewis play in the Delta, and the Mississippi Delta reminds me so much of the Mojave Desert in that there is absolutely nothing there, but there is absolutely everything there. There’s a lot of spirits and ghosts in both places, and so many sounds of music that are in the breeze out there. It’s a magical place, for sure.”

He continues: “If I go into the Mississippi Delta at pitch black midnight and put on a Robert Johnson record, it’s hard to sit in the car because it’s pretty powerful. If you go and sit by yourself in the middle of the Mojave Desert at sundown and, between meteor showers, the natural beauty of the land, the rattlesnakes, the rocks, the cactus, and all of those things, you’re still the same person the next morning when the sun comes up, I’d be greatly surprised.” 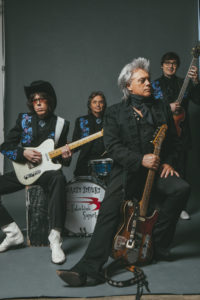 The album was produced by Mike Campbell. The pair first worked together on Johnny Cash’s Unchained, the second of his American series.

“That Unchained project was a bitter sweet project for me. Because Johnny was my old country music hero and he was my lifelong ‘chief’ – later on he was even my father-in-law for a few minutes. He was my next-door neighbour on the day he died. But I hadn’t been into the studio with him for years, and when we went in to make that record, I saw the beginning of the end in his life. I saw that he was struggling and that his energy level was not what I’d always known it to be. I went away thinking we’d got a good record, but I couldn’t shake the fact that I saw my old ‘chief’ getting old.

“When I look back at any of my own records, I see it as like making movies or building houses. Once you’re through, you make peace with it. I shake hands and look at it lovingly, then I move on to wherever my heart takes me to next.”

Marty Stuart And His Fabulous Superlatives are at the Royal Northern College Of Music on October 10, 2017.