Be My Baby at Greater Manchester Fringe Festival

Alastair Michael July 15, 2014 Arts, Theatre Comments Off on Be My Baby at Greater Manchester Fringe Festival 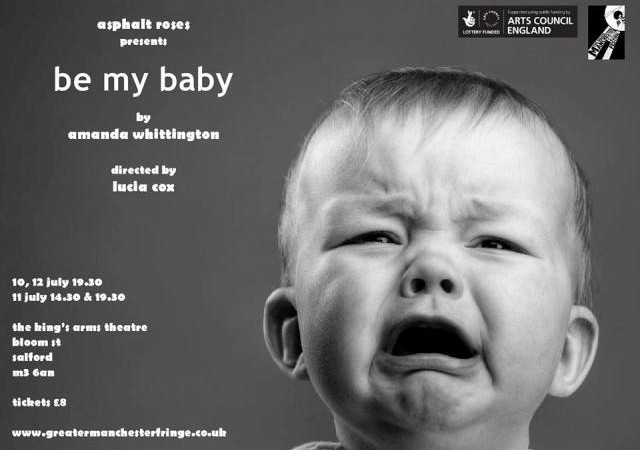 It is a truth universally acknowledged that the 60s was a time of sexual liberation. And yet, Amanda Whittington’s Be My Baby focuses on a different phenomenon of the time: the secret birth of illegitimate children in church-sponsored homes, before being given up for adoption by their young, unmarried mothers. It’s a play that provides a stark reminder that the era wasn’t so swinging for everybody.

Set in 1964, Be My Baby follows the fortunes of Mary Adams (Hannah Blakeley). Mary is 19-years-old and seven months pregnant. We first meet her when she encounters the matron (Morag Peacock) of a mother and baby home that she is being enrolled in by her mother (Laura Campbell). The play then follows Mary and her fellow inmates as they revel in the girl-groups songs that have defined their idealised love-lives while learning to cope with the societal shame of their illegitimate pregnancies.

Staged in the round at the Kings Arms theatre in Salford, Asphalt Roses and director Lucia Cox’s production evoked the 60s with consummate ease. Music was their main tool and it was weaved through the play with skill. Decade-defining songs like The Kinks’ All Day and All of the Night, Dusty Springfield’s I Just Don’t Know What To Do With Myself and, of course, The Ronettes’ Be My Baby have that irresistible quality which serves as an escape route for the play’s characters as well as connecting audience to the play in a way that can only be achieved by such music. The clever choice to mix in contemporary versions of these songs ensured that the audience was not only looking into the past, but simultaneously being held in the present. Perhaps it helped them to reflect on how the play’s issues manifest themselves post-millennium.

Additionally, the thoughtful musical interludes between scenes allowed for seamless changes, all of which were in harmony with the production’s tight direction. An interesting feature of Cox’s handling of the play was the use of live music with the all-female cast beautifully executing mesmerising harmonies, creating a real sense of atmosphere. Such atmosphere was tangible in the serene opening scene; a choral hymn filled the space as the all-female cast drifted onto the stage in an ethereal procession, each adding their voice to the gradually swelling harmony.

Cox’s sensitive production featured fine work from all the cast, particularly Leni Murphy as Queenie. Her play-acting of The Shangri-Las’ Past, Present and Future demonstrated an understated and astute comic timing that had the audience grinning along. These moments of bittersweet humour from the play’s strongest matriarch did leave a craving for a slightly grittier production. At times, it felt as though the serene atmosphere of the opening had not quite been shaken off. Some moments could have been a shade darker especially when dealing with unreported rape and back street abortions.

Be My Baby was Asphalt Roses’ inaugural production. Having struggled to discover creative opportunities for women in the North West, the company was established to create such roles while exploring women’s issues, feminism and femininity through theatre. On paper, Be My Baby fits Asphalt Roses perfectly; it pertains to the role of women in society as well as having only female characters. However, at times it felt like the text fell a little short of the company’s ambitious and admirable ethos. To some degree, the representation of women in this play is restrictive. Although there is merit in revisiting past oppression, there is perhaps more to be won looking forward rather than backward when carving out a new place for women in theatre.

What: Be My Baby by Asphalt Roses

Where: The Kings Arms Theatre, Salford

Be My Baby has finished its run, but the Greater Manchester Fringe Festival continues until July 31, 2014