Let’s get this straight from the start. If you, reader, are sitting there thinking, “Dexys! Hahaha! Come on Eileen! One-hit wonders! Raggle-taggle gypsies! Hohoho!” – well, you’ve got it all wrong. Yes, their 1982 number one hit single was their big moment in the public eye and over the years it’s graduated seamlessly from school disco to wedding disco to, well, school reunion disco. But it’s really only one facet in their rich, fascinating career. Now reactivated, Dexys have recorded their fourth full album, 2012’s beguiling One Day I’m Going to Soar, and they’re a finely-honed, electrifying live act. Tonight’s event, part of this year’s venerable Hebden Bridge Arts Festival, is an attempt to demonstrate what they’re doing now.

Ultimately the story of Dexys is the story of lead singer Kevin Rowland, a stroppy Brummie of Irish descent propelled onward by a passionate love for, and understanding of, classic soul singers. Rowland himself is present tonight, along with Dexys’ legendary brass player Big Jim Paterson. But that’s only after a screening of Nowhere is Home, a new film documenting a Dexys live show from last year at the Duke of York theatre in London’s West End.

Historically, Dexys have always has a strong sense of style and of occasion; their celebrated Projected Passion Revue shows from 1981 were staged at seated theatre venues, with support from a comedy act and a dance troupe. There was even a programme. The One Day I’m Going to Soar shows aren’t quite that lavish, but Rowland and co still maintain a strong theatrical streak.

The album is presented in toto, in order, and it even has a narrative of sorts, charting the course of a love affair – though the term ‘concept album’ probably wouldn’t be welcome here. At the start of the show, Rowland portrays a lonely, paranoid character with a heart full of longing – a feeling which finds focus in the form of a woman, personified by actress and singer Madeleine Hyland. It’s a path which doesn’t run smooth. She makes her entrance during the serpentine She Got a Wiggle, which failed to make much mark as a single – were people thrown by the title? – but which deserves to stand amongst established Dexys classics. 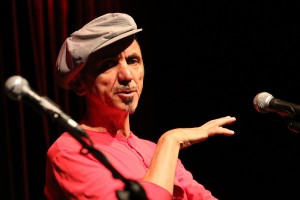 The film itself is strong and focussed, with few frills: the emphasis is on the performance, rather than the audience, for example. The one major flourish is when it follows Rowland around the theatre during the wondrous This Is What She’s Like where he leaves the stage, and in itself this becomes oddly thrilling. The whole thing’s so lovingly shot and excels at capturing the show, which is, after all, the whole point. It’s vivid, simple and beautiful. As concert films go, it’s remarkable of its kind. Dexys look and sound terrific, and it really is the next best thing to having been there.

There are some curious omissions, though. Live, Dexys have re-appropriated Come On Eileen and deliver in it a barnstorming extended form. It’s not included in the film though, most likely to highlight the newer, less familiar material, but it’s perhaps a bit of a shame. Similarly, the Dexys faithful might regret the absence of a lengthy long-standing live highlight in which Rowland’s trusty lieutenant, bassist Pete Williams, interrupts Until I Believe in My Soul in the guise of a esoteric policeman. In general, Williams’ vital contribution to Dexys doesn’t get nearly enough screen-time here.  And yes, that bit is absolutely as good as it sounds.

The performance material is framed by unfussy, static interview footage of Rowland and Big Jim, which is used sparingly and to great effect. Rowland doesn’t really give much away, though, and this is echoed in the live on-stage interview afterwards, conducted by Dave Haslam. ‘Circumspect’ isn’t the word; without ever being surly or rude, Rowland is a dab hand at giving clipped, functional answers that don’t reveal very much at all. Big Jim, on the other hand, doesn’t say much full stop, though he occasionally clips in with a wise observation that hits the nail firmly on the head, quietly stealing the show.

Rowland is a complex, admirable figure and it’s great that he’s back in action. His presence tonight is electrifying, even if the actual conversation is pretty flat. It’s perplexing that he’s so careful and guarded in person when his songs are so openly soul-bearing that at times they verge on listening in to a therapy session. For many years there’s been talk of him working on an autobiography. Here’s hoping that, in doing so, he takes the bravest route and tells the whole truth. It would make fascinating reading. Sometimes he teeters right on the brink of seeming ridiculous – but that’s part of what makes him so compelling and, besides, his sense of humour often gets overlooked. There’s so much more to him than Come On Eileen, and Nowhere is Home, like all of the recent Dexys activity, is a sterling testament to that. You’ll never see this band on a ‘greatest hits of the 80s’ package tour. See this film and you’ll understand why. 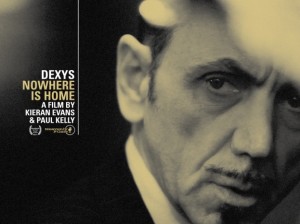