Crimes of passion. Glamour. Menace. Intrigue. Slim cigarettes, cocktails and pussy bow blouses. Exotic-sounding European names, dubious French accents, Lords, Ladies and business tycoons. Twists that you never saw coming, although you smugly protest that you had it all sussed within the first 20 minutes.

There are many reasons why Agatha Christie remains so appealing today. Consider the fact that some 30 years after her death, a BBC adaptation of her famous bestseller, And Then There Were None, pulled in six million viewers on Boxing Day and garnered widespread critical acclaim for its stylish menace and brooding ambience (not to mention that Aidan Turner towel scene that sent Twitter into a frenzy).

So when I discovered that Newcastle’s People’s Theatre was staging a production of Murder on the Nile – Christie’s 1944 stage adaptation of her earlier novel Death on the Nile – I jumped at the chance for tickets. I took my seat on the opening night of the production and immediately began speculating over who would be killed: when, and by whom, with what motive. “It’s got to be money,” I said to my friend, suddenly transported 15 years back to family Cluedo boardgame nights when I’d wrongly guess the murderer five times and shuffle coloured thimbles about a battered board in lieu of the actual pieces, which had long ago vanished under the sofa and up the hoover. 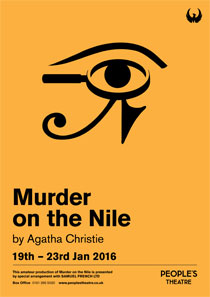 The action takes place aboard a cruise ship down the Nile where an assortment of classic Christie characters (a rich aunt, a downtrodden niece, a clergyman, a doctor, a socialist and a socialite among them) are in for a journey they won’t forget in a hurry. Spurned lover Jackie de Severac (Alison Carr) has followed her former fiancé Simon Mostyn (Ian Willis) and his new wife Kay (Sarah Jo Harrison) aboard their romantic honeymoon getaway. De Severac recounts the details of her sinister plan to shadow the newlyweds everywhere they go to Canon Pennefather (David Downing), despite his pleas and protestations that she leave the boat and surrender her plan.

What follows is a romp through love, passion and revenge that almost borders on farce in places. I won’t spoil the fun – part of the glorious appeal of Christie is trying to figure out the crime before the amateur sleuth reveals it all at the end. This time, Pennefather takes the place of Christie’s most famous sleuth, the twinkly-eyed and jet black moustachioed Hercule Poirot. I spent much of the performance whispering my (largely wrong) suspicions and crossing out names and motives on my notepad. It wasn’t until near the end of the play that I sussed it (and I did, a full 15 minutes before Pennefather got there – honest).

The nautical set is effective and there are some real laugh out loud moments – mainly courtesy of Jake Wilson Craw’s performance as William, an angry and incredulous young aristocrat who champions worker’s rights – and also some sad ones, such as Jackie’s wistful assertion that her husband had left her for another woman because “when the sun comes up you can’t see the moon. I was the moon.”

The People’s Theatre promised a ‘winter warmer’ in this production. If, like me, you’re a sucker for a whodunnit, you could certainly do worse than spend an evening in the company of the talented People’s cast – and, of course, the godmother of crime.