It can be an overused term but Delia Derbyshire definitely qualifies as a ‘cult hero’. Among the cognoscenti she’s revered as a pioneer of British electronic music, and one of the first true artists in the field. To many she’s known for the peerless original version of the Doctor Who theme – which she didn’t actually write but instead brought to life with the banks of oscillators and tape machines at the BBC Radiophonic Workshop.

Though Delia (who died in 2001) was from Coventry, her work has now found a spiritual home in the North thanks to Dr David Butler of Manchester University, which now holds her personal archive. This fact is celebrated with the near-enough-annual Delia Derbyshire Day live events. The first of these was held at Band on the Wall, the second at the International Anthony Burgess Foundation. This year’s event – the third – took place in the largest cinema space at Manchester’s HOME, and to a capacity audience, too. Clearly the cognoscenti are growing apace. 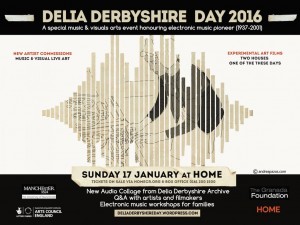 A major stumbling block, though, is the question of how to celebrate the career of someone whose complete released recorded output could pretty much fit on a single CD; moreover, how to do so with a live event, and lend it a visual aspect? Happily, this year’s Delia Derbyshire Day pulled it off with aplomb.

The first half consisted of screenings of two short documentaries for which Delia provided soundtracks; both had been all but forgotten. The first film, One of These Days (1973), follows the day in the life of an artist, namely Marte Röling, a designer from Amsterdam. It’s very much ‘of its time’, but isn’t afraid to show just how full of herself Röling can be. As she wanders the city, we hear the artist’s musings in voiceover, as well as the thoughts of various members of the public on the big questions of life. Delia’s score uses treated loops of spoken words to bold effect. It’s not exactly the missing link in her oeuvre. In particular, it harks back to The Dreams, her impressionistic 1964 radio collaboration with poet Barry Bermange. But nonetheless, it’s certainly very Delia.

The second film, Two Houses (1980), concerns two dilapidated Victorian properties bought up by architects who again tell their stories in voiceover. The visuals take the form of stills of the buildings, with only the occasional human face appearing. The two contrasting tales are fitfully amusing, and it’s diverting enough, but nothing more. Delia’s score is minimal, but it’s particularly intriguing that it consists of piano themes (played by another musician), rather than her usual electronica. Certainly, both films help to fill out Delia’s story because it’s generally been  assumed that she did little original work after leaving the BBC (rather tragically, she found herself working as a radio operator for the Gas Board to make a living). 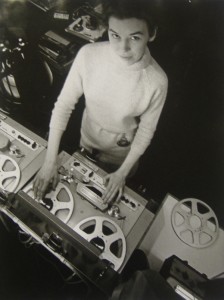 After the interval, newly-commissioned work is offered up, with the intention to respond to Delia’s work. This risks being a poisoned chalice. Stick too close to her own stuff and it’s unnecessary; drift too far away from it and it becomes irrelevant. Again, this fine line is negotiated well here. Dr Butler has assembled a bespoke mix of Delia’s work from the archive, to which artist Mary Stark has created a film accompaniment – a scratchy monochrome flow of words and shapes, many of them Delia’s own scribblings from notebooks and scores. It’s simple but very effective, and provides a highlight of the night.

Then, The Architects of Rosslyn – composer Mandy Wigby with musician Howard Jacobs – provide a live musical score to surreal short films by Di Mainstone. Using keyboards and all manner of unusual instruments, they succeed in paying homage to Delia’s DIY spirit without aping it too closely.

There’s a brief, illuminating Q&A session afterwards, a nice addition to a day’s worth of Delia events from HOME including a music-making workshop for little ones and a pop-up music performance by sound engineer Janet Wolstenholme. It’s all very lively and accessible and the whole enterprise deserves to flourish even further in years to come. Delia herself, one suspects, would have been tickled completely pink.

A touring version of this event will be held at Leeds College of Music on February 2, 2016. Tickets here.

In our current cookery series, The Stinky Chef in Rawtenstall, Lancashire shares a selection of delicious recipes - this week it's panna cotta with local strawberries and aged balsamic. Oh my. northernsoul.me.uk/the-stinky… @TheStinkyChef pic.twitter.com/1gqevnudFv