The talent there was remarkable, both on and off the stage. The girls from BAPS Theatre, an all-female ran theatre company, really outdid themselves. They managed to turn a side room in Twenty Twenty Two, a bar known for its drinking and ping pong, into a performance space. They creatively used fairy lights and sound effects to create the scenes and mask the reality of the space. The rustic feel added to the show’s appeal, even with odd cheer of ping pong winners. On top of that, the simplicity of the sets and stage allowed for the actors’ talent to really shine through. 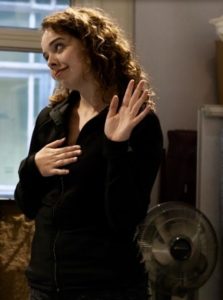 The first short, Big Dipper, written by Mervyn Hadfield and starring Nathan Lea and Steve Connolly, was hilarious. The men played two pickpockets, one more Artful Dodger than the other. Their fantastic chemistry on stage was apparent in every scene. The men also acted in the last play of the night, The Gaffer, written by Joseph Walsh. Undoubtedly, it was one of the best plays of the night.

Another beautiful piece was Gently Drifting, written by Phil Pearson and featuring Lottie Jones as Louise. It was a seemingly simple set, with only one actor and a couple of props, but the simplicity made the impact. It left you wanting to know more of Louise’s story, despite her few minutes on the stage. Hopefully one day we will get to see a full version of this poignant play. 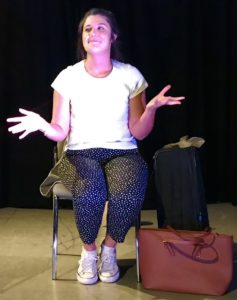 Fashionably Late, written by Helen Anderson, was also a favourite of the night with Janice Fryett and Deborah Sekibo as Karen and Paula. The duo played adopted sisters and were a joy to watch. Snide remarks and eye rolls mixed in with the comical sarcasm made this short a spectacular watch.

North West Wonders showcased the best of Northern talent. Here’s hoping we see more from these up-and-coming writers and actors.

Bring on next year.

“Stay true to the kind of work you want to produce and there will be a home for it.” Author Gaynor Jones, winner of New Writing North's Northern Debut Award 2020, reflects on what it means to be a Northern writer. northernsoul.me.uk/gaynor-jon… pic.twitter.com/gNaMYTkYK6

@Jonzeywriter Fab article, thanks for writing it. - Helen, Editor

“Stay true to the kind of work you want to produce and there will be a home for it.” Author Gaynor Jones, winner of @NewWritingNorth's Northern Debut Award, reflects on what it means to be a Northern writer northernsoul.me.uk/gaynor-jon… @Jonzeywriter @McrLitFest @McrWritingSchl pic.twitter.com/DCi8xJKkk5