As an undergraduate at Manchester Metropolitan University (many moons ago) I opted for the intriguingly titled Modern Gothic module. It was here that I stumbled across 1997 Booker Prize-winning The God of Small Things by Arundhati Roy, the story of twins Rahel and Estha growing up in the politically turbulent state of Kerala in the 1960s.

As with most course material when you’re 19, I only half-read it the evening before the lecture. But, fast-forward a few years to when I’m broke and scanning my bookshelf for a novel to take with me on holiday, I pick up Roy’s debut and re-read it. This time, I can’t put it down. I love it. So much so that I immediately fire up my Amazon account and attempt to order more books by Roy, only to find out that she hasn’t written another novel. There were essays, sure. But novels? Nothing.

So when I heard that not only was Roy publishing her first novel in 20 years (“The 20 years is complete coincidence,” Roy later confirms. “I’ve been working on the novel for ten years. I could not have written it slower or faster than I did.”) but was headed to my neck of the woods to give a talk and a book-signing (so I’d get to meet her) at Manchester’s Royal Northern College of Music, I was beyond excited. 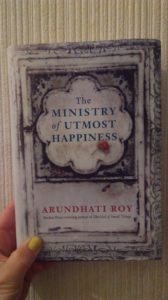 Weirdly, I’d never met another Roy fan until a chance encounter with my friend, Alex. Both newly-single (I was on the hunt for somewhere to live and she was looking for a housemate), we instantly bonded over a shared love of Chimamanda Ngozi Adichie and, to my delight, The God of Small Things. I credit that novel as not only getting me a place to live, but securing me a fantastic life-long friendship.

But it’s not like Roy’s rested on her laurels in the interim. She’s been awarded the Sydney Peace Prize and published five non-fiction books including The End of Imagination, Broken Republic and Capitalism: A Ghost Story. Impressive stuff. As well as protesting on behalf of Kashmir independence and against Hindu nationalism, and fighting charges of agitation laid against her by the Indian government. She’s had her hands full.

As we file into the concert hall for this Manchester Literature Festival event, it’s clear just how many fans Roy attracts. The large room is hot with bodies, reverberating with excited chatter as we wait in anticipation.

The lights dim and we’re treated to a short film, collated by Roy’s friends. It’s a great piece of video, about ten minutes long, and evocative of the sights and sounds of the author’s prose. Beautiful imagery is spliced with text from the new novel, The Ministry of Utmost Happiness, as Roy reads select passages in her melodic tones. It’s a bit like a lullaby.

Unfortunately, the quality of Roy’s microphone throughout the event isn’t very good, so we fight to keep up with the interview (and I struggle to write anything down). However, by the time it comes to the audience Q&A – and after a fella in the audience mentions the issue (and everyone claps) – someone’s passed her a microphone and the sound gets a bit better. It’s not an intimate affair, like most book readings I attend but. like I said, she can certainly pull in an audience.

I’m enthralled by Roy, and she’s every bit the literary powerhouse I expected her to be. She has the audience equally in raptures, stitches and complete awe.

So, does The Ministry of Upmost Happiness connect with The God of Small Things? 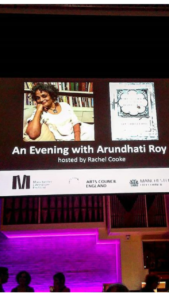 There are “echoes” of her debut novel in her latest offering, she admits. But it’s a separate tale. Spanning many years, the story extends the vibrant, cramped neighbourhoods in Delhi through to the Valley of Kashmir and out into the lush forest of Central India. Things aren’t always as they seem, and war and peacetime are interchangeable. The Ministry of Utmost Happiness is not only a stunning love story, but a tale spanning time, city and even the living.

The novel provides a cast of unforgettable characters, caught up in the ebb and flow of history, each clamouring for a place of safety. Its characters are broken and damaged by the world in which they live. As Roy narrates at the beginning of the night, “How to tell a shattered story? By slowly becoming everybody. No. By slowly becoming everything.”  And The Ministry of Utmost Happiness does this by depicting a vast array of characters, both alive and departed, human and otherwise. Love is their tonic. Love is the thing that fixes them. Love is the thing that binds them together and ultimately triumphs. In light of recent political events, it’s pretty relevant stuff. 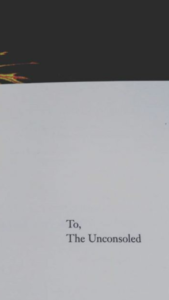 In short, it’s beautiful and incredibly brutal. And, in many ways, the novel is as political as any of the essays Roy has written on the subject of politics.

Although I’m a bit disappointed by the huge queue for book signings, I suppose when you’re a superstar author like Roy it’s tough to have that one-on-one time with your readers. I’m not entirely sure what I would’ve said if I’d had the opportunity. As I finally reach the signing table, I pass my copy of The Ministry of Upmost Happiness (I’d hot-footed it to Stockport Waterstones earlier in the day in an attempt to beat the crowds at the book stand) to Roy and she smiles, says hello and adds her signature to the title page.

I leave feeling sated. Not quite on the same level as when I went to see Neil Gaiman at Central Hall in Westminster – and he responded to my tweet about how excited I was to see him (claim to fame, right there) – but it’s one fantastic writer ticked off the Would Like to Meet list.

For me, Roy’s novels are untouchable. Boundless in their beauty, poignant in their narrative and stunning in their description. I am always struck by the beauty of her interpretations of landscape. A couple of lines and I feel like I’m there, in India, despite never having visited the country (although Kerala and Goa are on the list for next year). I can smell the flowers, the traffic, the bustling market. I can almost taste the cooking and the perfume. It’s storytelling at its most haunting.

For me, there’s not really another author like Roy. Not only can she can evoke several senses with one line of prose, but she packs some serious political punch, and I’m beyond thrilled that she’s back on our bookshelves.