In the atrium between the old and the new buildings at Manchester Art Gallery – a space which its director Maria Balshaw describes as “no man’s land” – hangs the first piece in a new exhibition by one of Portugal’s most famous daughters, Joana Vasconcelos.The piece is like two giant fabric egg-timers, joined by a snaking fabric rope which writhes up the staircase leading the viewer on to other impressive components. The new exhibition is simply, yet fittingly, called Time Machine.

Vasconcelos was born in Paris in 1971 but lives and works in Lisbon. She studied at Ar.Co in Lisbon and has exhibited regularly since the mid-1990s. After her participation in the 51st International Art Exhibition– La Biennale di Venezia in 2005 – her feminist, socio-political work became known internationally.

There are 23 pieces of the artist’s work spanning over a decade. The earliest piece, www.fatimashop, is a video installation of the artist’s journey to the small town of Fatima (a religious pilgrimage for Catholics), a journey which she took in a tiny Piaggio. The vehicle also forms part of the exhibition and it is Vasconcelos’ remark on religion and its relationship with money. With several new commissions enveloping the gallery including True Faith (a cross between sculpture and painting and a wry nod to New Order – a band much admired in Portugal), there’s a deeply personal dialogue direct from the artist which is both charming and grounded.

This conversation Vasconcelos has between new and old is something which underpins a lot of her work and provoked her to make much of the relationship between Lisbon and Manchester.

“I buy my fabrics from this place outside Lisbon,” says Vasconcelos, pointing out the various purple laces and pink chiffons in her work. “And I said to the man who sells me the material, where did you get this from. What did he say? Manchester.’’ 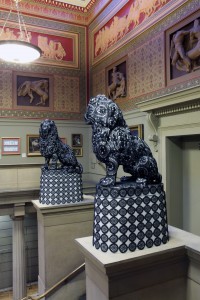 Having climbed up the atrium stairs, the view of this new piece (aptly called Britannia) from the walkway is all the more breathtaking. Inspired by her previous work Contamination which was conceived for the Pinacoteca do Estado de Sāo Paulo in 2008 and reconfigured for the Palazzo Grassi in Venice in 2011, the piece uses material from both Lisbon and Manchester: lace from Portugal and ‘Manchester velvet’ or corduroy.

She goes on to explain that it was exactly this duality in old and new and with Lisbon and Manchester that lead her to create one of the new commissions, Cottonopolis. Like this new work, framed around William Holman Hunt’s The Shadow of Death, many of her pieces are secreted, planted and found exploding between the traditional works in the gallery’s collections and sitting side by side with the famous designs in the Gallery of Craft and Design.

Wonderful pieces are woven in and out of the collection which offers up discussions on the past and its relevance in a modern world. There’s irreverence to much of Vancocelos’ work and to the artist herself who has given Northern Soul a personal tour of her work.

I suspect tongues will wag, jaws will drop and laughter will be heard as spectators come to see War Games,  the artist’s first car bejewelled with toy guns outside and stuffed with battery-operated toy animals on the inside. “It was my first big toy,” explains Vasconcelos. “I wanted to show the difference between what happens inside the home where it is safe and outside where there is danger.”

Balshaw has had Vasconcelos in her sights since 2005 when she saw The Bride at the Venice Biennial.

“At first I was in awe of this beautiful piece and then I laughed when I realised that this 50 foot chandelier was made entirely of tampons. I knew then that I wanted to work with this artist.”

Lilicopter is going to be the huge crowd-pleaser in what is a most exciting exhibition. It is the artist’s vision of what Marie Antoinette might travel in if she lived today. I don’t want to spoil it for you, though. I think you ought to go and have a look. When you do, just try not to gasp; instead, laugh and wish you had a piece like this all to yourself.

Vanconcelos is intriguing – half anarchy, half childlike, all bonkers. Perhaps she feels she exists in that space between the past and the future? She gives us, her viewers, that atrium that connects Manchester and the world. Perhaps she is levitating between two worlds, then and now and she is offering them to us. And we should be thankful that she is. The present is a gift after all.