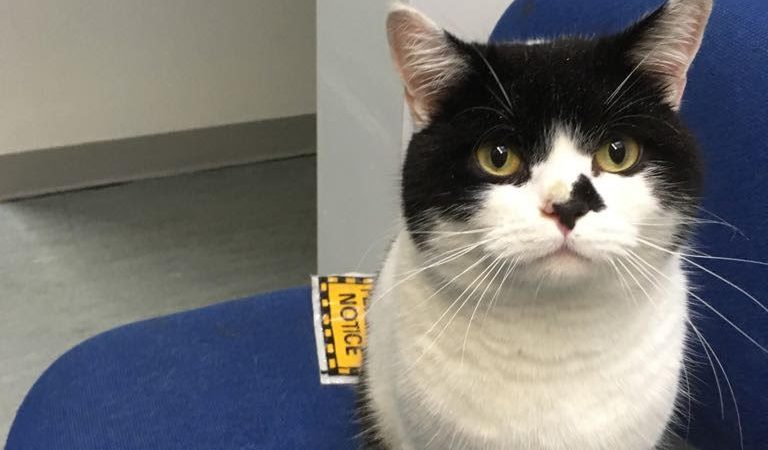 Some cats work for a living. And I’m not talking about catching the odd mouse in return for a bowl of Whiskas or keeping the neighbour’s moggy from relieving themselves in your back garden.

It’s 2018 and cats can be anything they choose to be: exercise partners (cat yoga is a thing, you know), therapy pets, security guards, café employees, mayors, train station staff like Northern Soul‘s feline friend Felix, senior pest controller at Huddersfield, and even social media stars worth millions (Grumpy Cat has secured himself – and his owner – a tidy fortune).

The latest feline to grace the Twittersphere with his adorable presence is PC Oscar the Holmfirth Police Station Cat. Yes, you read that correctly. There’s a new copper in West Yorkshire and he’s got four paws, long whiskers and a swishy tail. 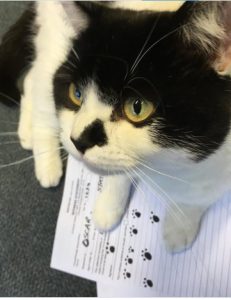 So, how did this delightful furry fella end up in the cop shop? We chatted to PC Oscar to discover more about his work with claw and order.

“I found myself at the station after a couple of officers started giving me a few titbits – they were below standard, might I add,” reveals Oscar, rather cheekily.

“I had an accident which involved my shoulder (yes, we cats do have shoulder joints) becoming displaced and out of the socket joint, which was placed back by the vet.”

The poorly puss was then confined to a cage for a few months to aid his recovery but, when his human allowed him out, he had no plans to lay low. “I decided ‘hell no, I am not going back in that cage’. It was a very cold night, freezing temperatures, and I saw the light on in the station. I tapped at the door and one of the officers allowed me in so I could warm up.”

Oscar pauses to lick a paw before continuing. “This happened on several occasions. I still keep popping back to my owners, which is a paw stride away from the station, and my owners are aware that I have taken on the job of welfare police cat.” 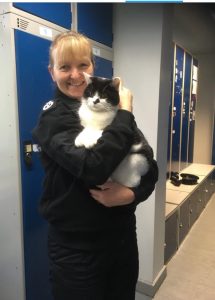 Life on the beat strikes me as being demanding. So, what do Oscar’s duties entail?

“On a day-to-day basis, I am first and foremost there for my officers who attend some really tragic incidents. They just come in and find me, whether I’m in the station in my room or out and about patrolling the station grounds. I think they find me comforting, therapeutic and calming. This is my main job for the police. I think they find it calms them during their daily duties, which I am, of course, more than happy to carry out.”

It’s been widely-reported than feline companions can help to tackle stress, particularly in the workplace. But can kitten therapy really help frazzled employees? Staff at Holmfirth Police Station believe so. Karen Giwisser, one of Oscar’s colleagues, fully endorses the benefits of furry workmates.

“We love Oscar,” she enthuses. “He is a beautiful addition to our station and very therapeutic and good for our health and well-being. Every station should have one. It certainly brightens the mood at the station.”

She adds: “As for having animals in the workplace, it has certainly helped officers that have attended some serious road traffic collisions. After attending these incidents, our first thought on returning back to the station was ‘I hope Oscar is around for a cuddle’. We feel Oscar is an asset to our team.” 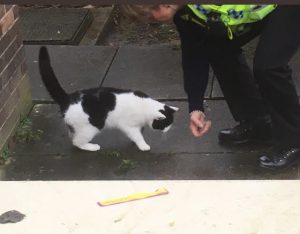 Like any other cat, Oscar is a sucker for a good treat. But forget doughnuts. “Oscar’s favourite treat is Dreamies,” admits Giwisser. “However, our chief constable did personally cook him some chicken and brought that to the station and he enjoyed that. Went in two seconds.”

It’s hard to imagine that, as a kitten, Oscar envisioned a life on the force. “I could never have imagined in Kitten School that I would get this fantastic job at the police station.”

So with his police cat credentials rated as purrfect and blessed with an excellent nose for sniffing out trouble, what does Oscar think are the best qualities for paw and order? “I believe that the making of a good officer is having honesty, integrity, respect for others, treating people fairly, selflessness and always acting in the best interest of the public we serve, which I am learning is part of the policing principles.”

And what are the perks and the pitfalls of being the police station’s preferred moggy? “There are lots of perks of being a station cat. Mainly, of course, lots of hugs from my officers, treats – but not too many as they think I will get too fat. Pah! And they let me behind the police bike which is under a great big radiator pipe (win win). I love being warm.” 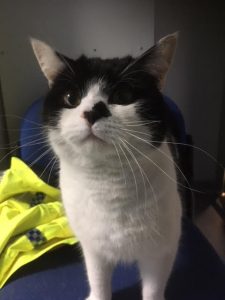 But the negatives, he muses, with a swish of the tail? “Hmmm. I don’t really see any downsides. I feel honoured to serve my officers and I feel that they appreciate me being around for them, especially when they have been dealing with incidents. Their health and well-being are so important so that they can carry out their duties to the absolute best of their abilities.”

Fame can be a fickle business, even for a cat, and Oscar is fast becoming a social media icon. Does he have any words of wisdom for his fans, and other cats, out there?

“I didn’t realise I was such a social media icon to be honest,” he admits. “It wasn’t until the followers were coming through thick and fast on Twitter.”

Oscar is an extremely busy cat with a vital role so I suggest a quick-fire round of questions. With a twitch of the ear and a gleam in his eye, he agrees, clearly chuffed that his beloved role is bringing joy to the public.

Garfield or Puss in Boots? Garfield

Favourite part of being a police officer? Being allowed to be there for my officers at the end of their shift for a belly rub.

Best place for a snooze? Behind the police bike under the radiator pipe – heaven!

If you could have a superpower, what would it be? Superpower would be to make sure all officers are safe and return back to the station unharmed both mentally and physically. Oh, and a constant supply of Dreamies.

The Bill, Hot Fuzz or The Wire? The Bill 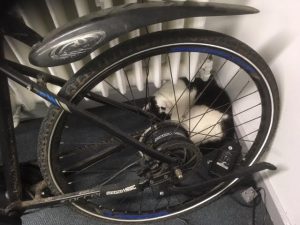 The future looks bright for this thoroughly commendable police officer. “I’m happy being the part-time Station Cat for as long as my officers need and want me. And, as you know, us cats always have more than one home. I also believe that some of the officers have some projects up their sleeves for me.”

He adds: “I feel proud that people enjoy following my duties and antics at the station. I’m hoping that when the new launch of Neighbourhood Policing Teams happens that I can become part of projects in schools and become a mascot for the station.”

You are right to be proud, PC Oscar. Northern Soul thinks that you’re an asset to the force. 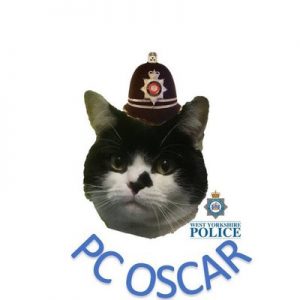