Into the Unknown: The Fantastic Life of Nigel Kneale

These days, Nigel Kneale isn’t a name that’s generally recognised by the man in the street. Trust me on this, because I’ve spent years of my life writing his biography, the second edition of which has just been published. Whenever I’ve been asked to explain who it is I’ve written about, I generally get a puzzled smile and a shake of the head. This doesn’t bode well for the royalty statements, obviously. But it’s actually quite a striking turn of events, because back in the day, Kneale was a major force in British television, a figure to reckon with. So why was that the case? Why is Kneale less well-known now, and how come that might that be about to change?

Kneale was born in Barrow-in-Furness in 1922. His parents were both Manx and just happened to be in Cumbria at that time because of work. Soon after the boy turned six, the family decamped back to the Isle of Man, then an unusual little community that still had a strong sense of everyday superstition and myth. It certainly left its mark on Kneale. Once he’d left school, he considered a career as a solicitor, or even as an actor, but before long he found his true calling: as a writer. 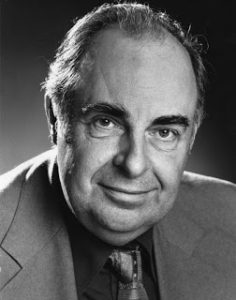 Having moved to London and established himself as an admired short story writer, Kneale made the leap over to television, as a staff writer for BBC Television. When it sparked back into life after the war, the TV service was still seen as a relative novelty and very much in the shadow of the nation’s favourite broadcasting medium, radio. But Kneale went from writing odds and ends – a children’s puppet show here, an adapted stage play there – to creating one of television’s first true originals.

The Quatermass Experiment went out live during the summer of 1953, just after the Queen’s coronation. Over six parts, it created a fresh, distinctive blend, the contemporary sci-fi horror thriller, and put Kneale on the map. He went on to write two more Quatermass serials (a belated follow-up came in 1979, too), each one of which was adapted for the big screen by Hammer Films. At the time, Hammer were making a habit of turning radio and TV shows into movies. The success of the Quatermass films was instrumental in persuading them to change tack and turn their focus more fully towards horror films.

Kneale occasionally made forays into the world of cinema – he wrote the scripts for the big-screen versions of John Osborne’s Look Back in Anger and The Entertainer – but he kept on coming back to television, which was where all his best work happened: an epochal adaptation of Orwell’s Nineteen Eighty-Four, remarkable one-off TV plays such as The Road, The Year of the Sex Olympics and The Stone Tape and the memorable 1970s anthology series Beasts. Arguably Kneale’s greatest strength was that his ideas were searingly original, and thus imperishable – and ultimately, vastly influential. They positively leap from the screen directly into the recesses of the viewer’s mind, and stay right there.

Down the decades, his family home in south-west London was a hive of industry, not least because his wife, Judith Kerr, became a best-selling children’s author of books including The Tiger Who Came to Tea, Mog the Forgetful Cat and When Hitler Stole Pink Rabbit (indeed, Daddy in Tiger… is unmistakably modelled on Kneale himself). In later years, their son, Matthew Kneale, became an award-winning novelist, too, notably with English Passengers, a historical novel about Manx slave traders. 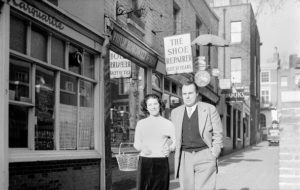 So why is it that Nigel Kneale is no longer a household name? Why, when the histories of TV drama are written, is he not cited alongside the likes of Dennis Potter, Jack Rosenthal, Stephen Poliakoff and Alan Plater? A major factor is that a lot of his work can be categorised, perhaps unfairly, as ‘genre’. It can still be something of a cultural ghetto. Kneale liked some science fiction, though he was supremely choosy about it; horror, he just didn’t care for at all. Fans of all things ‘cult’ worship Kneale’s work. Beyond that, he can risk being forgotten.

All is not lost, though. Kneale died in 2007 but his influence is all over modern TV. A whole raft of recent shows about official investigations into the strange, uncanny and unearthly – The X-Files, The Eleventh Hour, Threshold, Fringe – owe Kneale a very direct debt. He was even invited to write for The X-Files, but he didn’t much like the look of it. The same went for a couple of offers to contribute to Doctor Who, which continues to teem with little nods to Kneale’s work. Back in 1979, Ridley Scott’s original Alien film was much influenced by the mythology of Quatermass, and Scott’s recent Alien prequels, Prometheus and Alien: Covenant, have continued to draw upon Kneale’s ideas. Even the recent Alien knock-off, Life, is basically ploughing the same furrow, whether its makers actually know it or not. 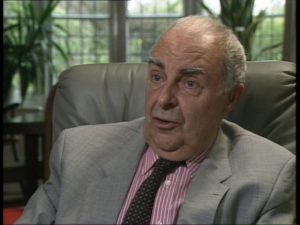 These days, Kneale has plenty of fans in high places. One such is Charlie Brooker, and that’s plain to see from the dark, twisted tales told in his shows Black Mirror and Dead Set. Mark Gatiss adores Kneale’s work, too: a recent edition of Radio Times, guest-edited by Gatiss, featured a special interview with Judith Kerr and saw Quatermass mentioned on the cover for the first time in an age. Meanwhile, writer Jeremy Dyson, Gatiss’s old League of Gentlemen mucker, has written a script for a proposed Quatermass TV reboot, to be co-produced by Hammer Films and Manchester’s own Red Productions for BBC America. Whether the production gets the go-ahead, though, remains to be seen.

There are other assorted exciting Kneale-related projects in various pipelines. Aside from my updated biography being published, a new collection of essays about various aspects of career, We Are the Martians, has just been released, with at least four other Kneale-related books being written as we speak. Most of Kneale’s TV work – the stuff that survived being wiped, at least – has been released on DVD, with a new volume of work for ITV, The Crunch and Other Stories, due soon.

All told, it’s a lot of activity centred around a writer who died more than ten years ago and whose name doesn’t ring a bell for most people. The sheer quality of his work, and the strength of his ideas, seems destined to live on, so it’s perfectly possible that Kneale’s reputation will continue to grow over time. Over the course of a lengthy career, he left behind a genuinely extraordinary body of work. Somebody should definitely write a book about this stuff. 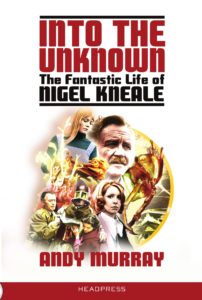 The fully revised and updated second edition of Into the Unknown: The Fantastic Life of Nigel Kneale by Andy Murray is available now from Headpress in hardback, paperback and e-book.

@Amy_Fleur_Stone @LaingArtGallery @BBCFOUR Oh, there is so much here. On the surface a poem by Keats but actually Keats was referring/stealing verse much, much older. And then the painter and his muse - she died during the painting. So all the classic themes of Isabella were mirrored in the painter's tragedy.

"Melting Point is that rarest of things; a collection that will return to the reader as often as the reader returns to it." Book Review: Melting Point by Baret Magarian northernsoul.me.uk/book-revie… @saltpublishing @desmondbullen pic.twitter.com/VPvShUR5C6

For nearly 30 years we've been obsessed with this painting at Newcastle's @LaingArtGallery - Isabella and the Pot of Basil. There's a dark history there... pic.twitter.com/Z1LLL7hima

We love the Laing... twitter.com/DeMorganF/stat…

@iainawatson My toddler corduroy dungarees were definitely a sludge brown.