Review and interview: The Museum of Water, Lake District

Chris Park May 21, 2016 Art, Arts Comments Off on Review and interview: The Museum of Water, Lake District

“Water is the mosaic of the universe,” says artist Amy Sharrocks at the opening of her art installation, Museum of Water, held appropriately enough in a boat house on Lake Windermere.

The Museum of Water, part of the Lakes Ignite Festival, is like most successful things – borne out of a simple idea that has taken a life of its own and turned into something spectacular. Over a period of three years, Sharrocks has amassed a collection of more than 700 bottles of water, mainly donated by the public, all with their own stories to tell which give a fascinating insight into our relationship with water, both good and bad. 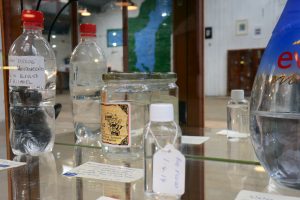 “Water is crucial to all of us,” explains Sharrocks. “Someone described it as life and death and all the washing-up in between.”

The public have come up trumps with this project. Water has been sent from all over the world, including a holy river in India, water from Knock in Ireland (collected by the donor’s recently deceased mother), water around a baby born in a well, and a dearly departed snowman complete with submerged plastic eyeballs.

Northern Soul caught up with Sharrocks to discuss how nerve-wracking and unusual it was for an artist to leave the main part of the exhibition in the hands of the general public.

“I felt it was brave to open myself up,” she says. “People could have been uninterested, I definitely risked refusal and rejection.”

The risk paid off. The boat house at Wray Castle, which is not ordinarily open to the public, has been transformed with the numerous stories hanging from the ceiling and the water exhibits sitting in cabinets, side by side, waiting for discovery. Sharrocks has provided guides to help visitors find their way among the haphazard collection of bottles. 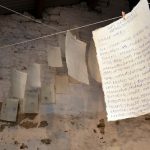 One guide showed me a phial of the clearest liquid I’ve ever seen. “This is 129,000-year-old water from an icicle in Antarctica. It came from 649 metres down in the ice core.”

When they gathered it, Sharrocks asked if she could taste some. She says it was the purest water she’s ever tasted.

“So Amy could have some antibody no human has ever had before. It could either kill her or make her into a superhero.”

The collection has visited more than 40 locations. Although the UK tour is now over, Sharrocks has been asked to replicate her success in Rotterdam in the Netherlands which is where she was heading off to after her time in the Lake District.

But were there any offerings that didn’t make the cut?

“There were some instances where we were unsure and the donor had to make a case. One guy sent half an orange in a jar of water and I wondered what the relevance was so he told me to imagine that the half of orange was space and all the tiny segments are tiny parts that made the universe. Instantly he was in.” 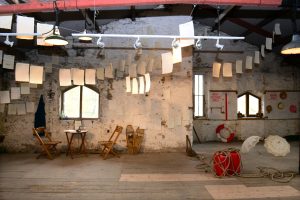 As Sharrocks takes me from one cabinet to another, her enthusiasm for people shines bright. This passion is why the exhibition works so wonderfully, a a fascinating celebration of people as well as water and all our strange quirks and foibles.

“One man sent me this,” she exclaims proudly, holding up a bottle of water captured around 20 hours into its 48-hour journey from Thirlmere to Manchester. “He is responsible for the water and if he gets the mineral content wrong he has to ring the man in the baked bean factory and tell him to adjust his recipe.” 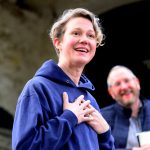 The exhibition was part of the Lakes Ignite Festival. Visit www.lakesculture.co.uk for further information.