All rise: breaking bread in the North

Laura Brown May 27, 2016 Enterprise Comments Off on All rise: breaking bread in the North

As people, we place a lot of faith in bread. We break bread as a basis for friendship. The smell of baking bread, we believe, can even help us to sell a home. It can make us feel useful. But does it represent redemption?

I met artisan baker Francesca Barker and she explained her ethos of honest food. Manchester-based Barker had tried her hand at cooking before – she’d even applied for TV’s MasterChef – but she’d never baked until her probation officer urged her to take a bread baking course. 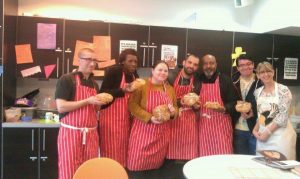 “She wanted me to keep busy and do something creative.”

Barker said no, it wasn’t her cup of tea. But her probation officer hadn’t suggested it as a way to find a new hobby. “I’d been expecting this terrifying criminal justice person. Instead, she saw I’d made one of the biggest mistakes of my life. She saw the baking course as a way to find some self-confidence and get myself back together. I was feeling sorry for myself and disillusioned.”

A Crown Court sentence got in the way of being in MasterChef but she could still do something useful, as Barker discovered on the course. We talk a lot about journeys nowadays, but this was the first step towards something new, something exciting. 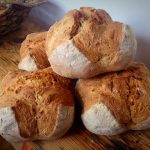 “I spent three days making bread,” she says. “I felt useful, for the first time in how long. Being able to give my other half something of substance. I felt really proud of myself. After drug rehab I could come home, share what I’d made with people.”

A few loaves turned into ten loaves, then 40 loaves. Then she decided to set up a market stall at Levenshulme Market.

“I was so nervous, so worried. It was so much like being in school. It was childlike, the nervousness I had.”

Barker set up a wallpaper pasting table, used a vintage suitcase and decoration, and sold her wares. “It was all done on a shoestring.” 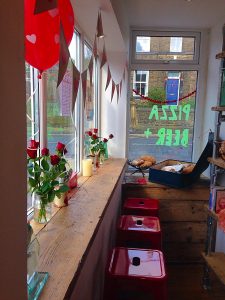 In the end, she needn’t have been nervous. “Everyone was lovely. They gave advice, I felt part of a community, accepted and not judged. It was more than just bread, it was being part of something. The traders who were on the left and right of me, I’m still friends with them.”

As her business and her bread started to gain recognition, Barker found herself winning one award, then a second. She began to be invited to work with youth offending teams.

“I was back where I began. What happened to me could happen to someone else. The bread I’d snubbed, it worked for me so it could work for someone else. I’d meet people who said ‘why should I make a loaf of bread, it’s a waste of my time’ and I’d see the same change, the same reaction when they make a loaf of soda bread in half an hour and can take it home. I saw the same sense of pride.”

From a basic white tin loaf to a Chocolate Orange Soda Bread, the Barker Baker experiments with flavours and fresh, good quality ingredients. They do, as they say on their website “take bread very seriously”.

As a cook or baker, you’ll know that some recipes create the same result each time. Bread isn’t like that. How warm your hands are, the temperature of the kitchen, how forcefully you knead, how long you spend kneading – all of these things affect the texture and taste of the finished product. Bread, more than anything else we make with our hands, is  a mirror to our current mood.

“Even when I’m baking now,” says Barker, “if I’m in a great mood it shows. If I’m stressed, it shows. It’s always this incredible product, come week in week out there are always slight variations.” 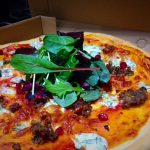 With a bakery in Littleborough in Lancashire and another in Afflecks Palace in Manchester, the Barker Baker has the opportunity to experiment and spread the word about how bread can change a life, as well as a palate. With a hatred of waste, she saw the chance to use the leftover dough and made a few pizzas. Customers came in and out and tried a few slices. She decided to give it a go and began running pizza nights on Thursdays, Fridays and Saturdays, all with a good beer in the heart of Littleborough.

Moving into Afflecks, not traditionally a food institution, has felt like a huge risk but is an incredible milestone for Barker. At the same time, Afflecks is a perfect fit, with its market feel and love of community.

In Littleborough, though, with her weekend pizza nights, first bricks, mortar bakery and devoted customer base, Barker has created something with true depth and flavour. There’s a hyperlocal revolution taking place in food now, and the Barker Baker is certainly a key ingredient. 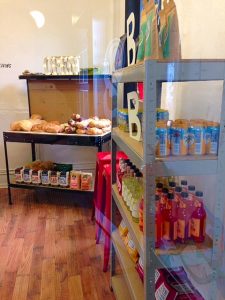 “I see the change, the money I make I spend locally. It’s old-school and it’s going back to our roots and it’s a direction we need to take. There’s a health conscious aspect to it, especially with bread. I make something with passion away from the additives.”

With her background, Barker feared she wouldn’t be welcomed in a small town. When the shop opened, she was worried she would always be known as the “criminal baker”. One day she went for a haircut. Asked what she did she said she was a baker. “A baker?” replied the hairdresser. “Oh, you should try our bakery. It’s run by a lesbian baker”.

Barker reflects: “The fact I was referred to as the ‘lesbian baker’ rather than the ‘criminal baker’ took me by surprise. I said, ‘I’m the baker’ and thought, ‘that’s fine with me’.”