It’s no secret that us Brits love a good festival. Come rain or shine, we strap on our wellies, slap on the glitter and head for the fields to drink tepid cider, listen to loud music and generally have a bloody good time. But there’s a darker side to our love of mud and camping and, no, I’m not talking about the portaloos or terrible personal hygiene. With the number of music festivals growing year-on-year, have you ever thought about how much waste is produced? When the party is over, thousands of tonnes of single-use plastic – including bottles, straws and tents – are left behind.

According to not-for-profit company A Greener Festival, waste generated at festivals is one of the sector’s most prominent environmental impacts with even the most well-meaning person dropping litter, especially when alcohol is consumed. Many festivals now implement some form of environmentally-aware waste management schemes and, in 2018, more than 60 independent British festivals pledged to rid their sites of single-use plastic by 2021. These statistics made me wonder what festival organisers are doing in the North.

Following work with the team at Greater Manchester Mayor Andy Burnham’s PlasticFreeGM campaign, festival volunteers at Envirolution Festival 2019, which returned to Manchester’s Platt Fields Park on May 25, worked to eliminate all single-use plastics on site on what was billed as the ‘first official plastic-free festival in Greater Manchester’. In the centre of the food section were several clearly labelled (and easy to use) recycling bins and plenty of signs were placed around the park reminding revellers to be mindful with their rubbish. Of course, this was a local festival and such restrictions would be far more difficult to implement on a larger scale, but it’s certainly a commendable achievement and I’m proud that it happened in the city I call home. 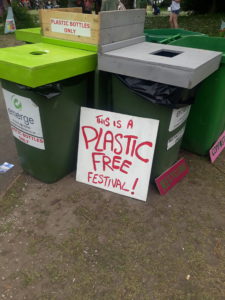 To my delight, the catering all appeared to be vegan (I’ve recently taken the leap to go plant-based), so there was none of the usual scouting vendors for meat and dairy-free options. After grabbing a jack fruit bao bun from the brilliant Wallace and Sons Catering (accompanied by a tray of chips, naturally), it started to rain, so I took refuge under a tree near the cake stall (for shelter-based purposes, of course) and sampled a mint chocolate cupcake. My friend attempted to stand in line for an ice-cream from Ginger’s Comfort Emporium (maker of a vegan ice-cream so good it’s nicknamed Chorlton Crack) but it proved to be a popular option and so he eschewed the gigantic queue.

In keeping with the theme of sustainability, there were plenty of speakers and local businesses. The event also attracted beauty giant Lush who were promoting their naked products after opening a packaging-free store in Manchester city centre earlier this year, as well as Oxfam and several smaller organisations all promoting ways to be more environmentally-conscious.

As I perused the Oxfam stall, doing my best to not purchase a canary yellow dress made from recycled clothing, I chatted to Envirolution’s marketing director Dan Gibbon-Walsh. “Envirolution has always existed as a platform for all of the positive things happening in Manchester. So we can showcase it to the people of our city and from further afield. With more interest now in what changes we can make to benefit the environment than ever before, Envirolution Festival is in a unique position to highlight so many of the great developments that are going on currently. 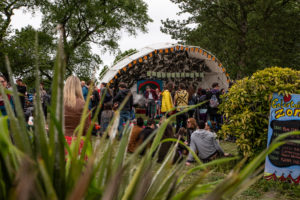 “The decision to make it a plastic-free festival was in response to the growing belief that we keep on producing more throwaway materials than needed, and we wanted to show that it is possible to run an event for several thousand people without needing to rely on single-use materials to make it work. It also allows all the great organisations here to show what alternatives are available, and how residents can introduce small, lasting changes into their lives.”

The vibe was family-friendly and there were a few activities aimed at kids which looked like great fun. There was also the Healing Garden with a selection of activities including yoga and gong baths. I’ve been desperate to try a gong bath since a pal raved about it helping her feel less anxious, but I was under the impression that my companion would rather spend the remainder of our time at the event in a festival bog than take part in one of these sessions. 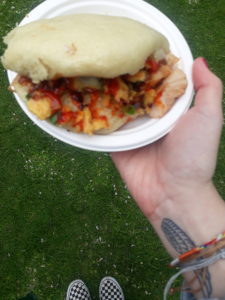 The atmosphere was overwhelmingly positive. “There is a definite feeling that we are close to a tipping point in regard to Manchester’s reaction to climate change,” said Gibbon-Walsh. “And it is great to see so much positive energy as we shape the city and its surroundings to move towards the target of becoming a zero-carbon city by 2038. I think everything that happens at Envirolution is a great snapshot of this and reflects the general direction Manchester is heading towards.”

Despite the drizzle, there were families dotted about on picnic blankets, people milling about and the usual festival feels were in the air. What’s more, there wasn’t a single piece of litter in sight.