Kraftwerk Uncovered: A Future Past 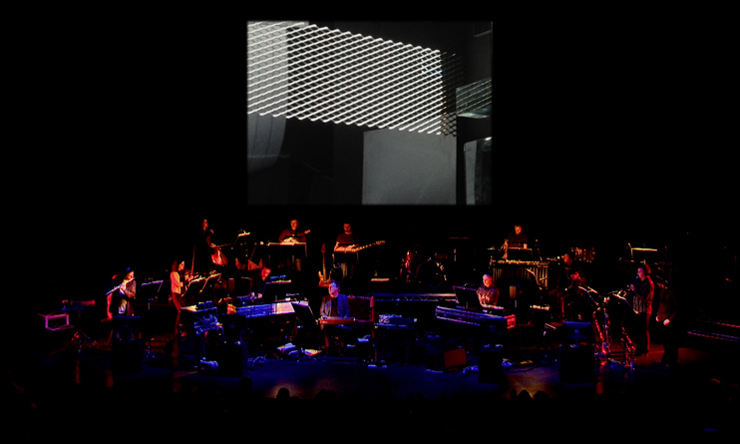 There was once a time when electronic ground-breakers such as Kraftwerk weren’t even regarded as making ‘proper’ music. They were the cause of sneers and raised eyebrows and jokes about bleepy malfunctioning calculators. Now their work is being saluted in the august confines of the Royal Northern College of Music, their standing as a seminal group well and truly established.

Icebreaker are a twelve-piece ‘contemporary music ensemble’ who have been active since 1989. A tight unit comprising percussion, keyboards, guitars, strings, wind instruments and brass, they conjure up something like Phil Spector’s Wall of Sound, if Phil had fallen under the spell of loops and minimalism rather than wigs and firearms. In 2010 they toured arrangements of Brian Eno’s ambient classic Apollo to great acclaim. This time out they’re tackling Kraftwerk, as well as an assortment of other modern composers (Erik Bunger, Michael Nyman, Barry Adamson) in the opening half.

Contemporary music can be a bit of an acquired taste: the jagged, insistent repetition of Michael Nyman isn’t for everyone. But Icebreaker’s arrangements are inventive and powerful. You could never accuse this of being ‘background music’: it’s a large group playing loud right in front of you, which makes for a visceral experience.

The Kraftwerk covers are the main attraction here. The Dusselfdorf mob have plenty of sly pop nous, and their songs are naturally more digestible than their minimalist counterparts. And we might more usually associate them with electronic sounds, but in their earliest days the band were much enamoured with electric guitars and processed flutes. Consequently Icebreaker’s array of live instrumentation isn’t such a radical departure as you might expect. Plus, the choice of songs avoids the obvious – no robots, models or express trains here – and dips into some of that very early pre-Autobahn work, which is even currently available on CD. The Icebreaker arrangements make free with the source material, bending the songs into new shapes and even blending them together (Kraftwerk themselves would doubtless approve: their album 1991 The Mix saw them taking much the same approach to their own back catalogue).

There are expertly-judged visuals, too – monochrome projections of curious rotating objects, flashing geometry, deserted German vistas. It all climaxes with a mesmerizing workout on Autobahn, which in these circumstances resembles a canny, accessible spin on modern minimalism.

It makes for an intriguing live experience, though arguably it’s all somehow easier to admire than to love. Kraftwerk’s secret weapon is a beautifully deadpan sense of humour, which gets expunged in this presentation. It raises other queries, too: do Kraftwerk’s songs really require covering? And do they need the stamp of legitimacy from this kind of treatment in this kind of venue? But since Kraftwerk have always generated questions about depth and authenticity, that seems kind of apt anyway. Icebreaker’s show won’t replace the desire to go back and listen to the original albums, but they have certainly managed to strip away a layer of over-familiarity from Kraftwerk’s work, and the result is thought-provoking and impressive.

What: Kraftwerk Uncovered: A Future Past