It’s not the first time I’ve been greeted by front of house at a restaurant with the words “you don’t look like a Helen” and I’m sure it won’t be the last. Once again, our great leader, Kim Il Helen, had been called away on urgent matters of State. The Northern Soul Awards are coming up next month so it’s a busy time at NS Towers. An emergency call to the Brunette assures me that I have a date for lunch at Albert Square Chop House.

The Albert is the newest of the three chop houses in town, Mr Thomas’s and Sam’s are the other two and have been serving Manchester with fine British food since 1867.

It was a pleasant autumnal day when I met the Brunette at the appointed time. We were met by Nick who, observing my lack of Helen-ness, lead us to a cosy booth in the basement of what used to be the Square Albert pub. Our host for the afternoon was Michaela, a proud Mancunian, bred if not born and a wonderful advert for remaining in Europe if ever I met one. Her energy, friendliness and knowledge were a true joy as we perused the new autumn menu. The Brunette has decided to do Dry October so it was left to me to select a dry and rich Chablis to accompany a starter of breaded whitebait. A lusty Cullen Skink satisfied the Brunette as she sipped her Adam’s wine. I reminded her that I had completed at least half of dry January by not drinking until noon but declined to reiterate W.C. Fields’ observation about fish and water. The Brunette declared her soup to be “creamy and leeky with generous portions of smoked haddock, a perfect winter warmer”. 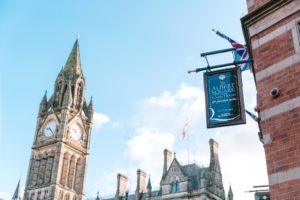 For our mains, my dark-haired companion opted for Albert’s Speltotto. A risotto dish with roast butternut squash, walnuts and squash purée with spelt, a wheat-like grain, rather than rice. I had long been a fan of the Chop Houses’ Steak and Kidney Pudding but it has been updated and, I must say, reinvigorated. The kidney has been removed leaving succulent and tender pieces of steak simmered in ale, encased in a suet pudding and placed on a bed of creamy mash soused in a rich gravy. Teamed with a fine Pinot Noir, it was close to perfection.

A shared Sticky Toffee pudding with a soft and sweet Hungarian Tokaii for me ended a glorious meal. I will certainly return during the forthcoming winter months for the hearty Steak Pudding. The Brunette and I parted company as the Town Hall clock struck three in the sure knowledge that we will meet again for lunch and that I will be once again greeted with the immortal observation: “You don’t look like a Helen.”