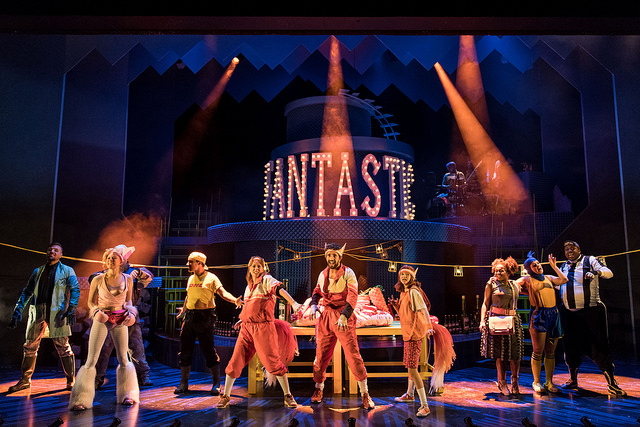 Roald Dahl only started writing children’s books in the early 1960s but they’re already beginning to assume the status of modern myths, fit to be reconfigured into all kinds of different shapes and forms.

His Fantastic Mr Fox has been turned into a Tobias Picker opera and a Wes Anderson film (a firm favourite round our house, in fact). Now it’s become a stage musical which debuted at Southampton’s Nuffield Theatre at the end of the last year and has fetched up at The Lowry in Salford this week as part of a national tour.

Now, the thing about Fantastic Mr Fox is that – whisper it – nothing much actually happens. Yes, a cocky fox invokes the ire of three local farmers who become obsessed with killing him. Then – spoliers! – they don’t and he makes his escape. It’s not exactly one of your twisty-turny narratives, but it remains funny, involving and endearing because the characters are so vivid. This stage production is an object lesson in how to adapt a fun but thin book into a piece of theatre, and it does so with alacrity.

The book focuses on Mr Fox and his family, bringing in a host of animal friends as they crop up. Here, the animal team, complete with fluffy-eared head-dresses rather than full face masks, is established right from the off. This makes it a story about the main character’s journey to realising that he can’t make it on his own, no matter how fantastic he might be. Well, that and poaching, digging and cider, obviously.

In this production, Mr Fox isn’t hell bent on getting his lost tail back as in Dahl’s book, but instead he finds that his sense of balance has gone pear-shaped as a consequence. The assorted forays into the farmers’ assorted storerooms become major action/comedy set pieces which are ingenious, resourceful and beautifully done, all across a revolving split-level stage. 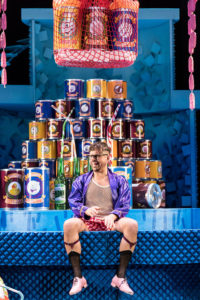 The original songs, provided by a live band, have a strong, beefy sound which nods towards the heyday of the rock opera (with music written by Doctor Who/Broadchurch star Arthur Darvill). In truth, though, there’s not a show-stopping, singing-it-all-the-way-home killer tune in there, and it’s this sense of not-quite-thereness that makes it a really good show rather than an absolute belter. There are loads of laughs dotted throughout, but only occasionally are the audience left properly roaring. Also, there’s still a lingering sense that so-called ‘fantastic’ Mr Fox needs bringing down another peg or two before he deserves his happy ending.

Among the cast, Gruffudd Glyn (as Mole and Farmer Bunce) and Sandy Foster (as Rabbit) particularly excel in keeping the energy and the jollity up on what is, after all, a hot night towards the end of a long tour. At just over two hours, it is long for a family show, and there are certainly stray moments when the on-stage energy could do with an extra boost, or some of the lyrics and dialogue risk being a little lost. Niggles aside, though, this is a smartly-done, thoroughly entertaining show which offers a generous helping of fun for all ages. It succeeds in capturing the essence of Dahl’s book – and even manages to give it a worthwhile makeover here and there. 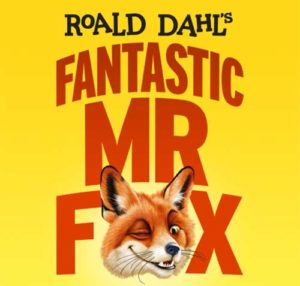