I never did read The Hobbit. Our village library had a copy but getting hold of it was about as easy as, well, stealing dragon’s treasure. In the end I made do with Lord of the Rings – or rather, the final two-thirds. The opening volume of that was always out of the library as well. So I came to The Dukes’ summer promenade of The Hobbit without any worries about fidelity to the ‘original’ (the main departure from which seems to be the switch of Thorin Oakenshield’s gender). 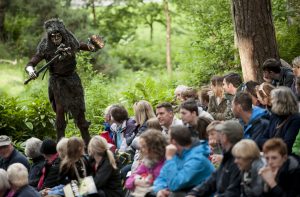 And what locations! Lancaster’s Williamson Park must have one of the most varied landscapes for its size in the country. Among its gems are ornamental lakes, the view over Morecambe bay, rugged former quarry workings, steeply wooded hillsides and the ‘Taj Mahal of the North’ in Lord Ashton’s memorial to his second wife.

As 500 people progress on their own quest through the park, goblins appear above the brow of the hill, lanterns appear in the distance, and Gandalf and wood elves watch our progress through the woods. It’s a steep climb up to the airy spaces at the top of the park, where the dragon’s lair is the appropriately monumental architecture of the Ashton mausoleum.

The most magical scene is where the park’s natural resources meet the theatrical imagination, in the encounter between Bilbo’s party and the wood elves. Here the forest is transformed into an uncanny space, the elves suspended, chrysalis-like, in semi-transparent fabric hung from the trees. Natalie Morrell’s movement direction gives them a weirdly sensual physical signature when they emerge.

Tolkien’s epic vision is well served in the final battle of the Five Armies. Wisely, the production avoids actual fighting in favour of a more symbolic clash between Joseph Black’s imposing Great Goblin and the questers. At the other end of the spectrum, we are no more than a few feet from some close-up magic when Gareth Cassidy’s cheeky-chappie Bilbo Baggins uses his invisibility ring to outwit Josie Cerise’s squirmily psychopathic Gollum in a muddy part of the woods.

Throughout the production, lighting, composition and sound design add some impressive touches, especially as the light starts to fade, the sound in particular giving an otherworldly tinge to troll, goblin, and elven voices. The one place the atmosphere dissipates a little is when we actually get to see the dragon Smaug, who reminded me too much of a multi-coloured carnival float.

The cast of seven, with strong support from the Dukes’ Young Company, bring plenty of passion and versatility, but the real star, as usual, is The Dukes’ imaginative use of this wonderful space in a show for all ages. 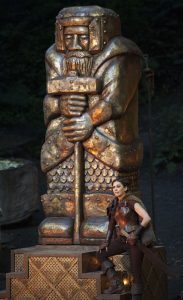 Where: The Dukes at Williamson Park, Lancaster