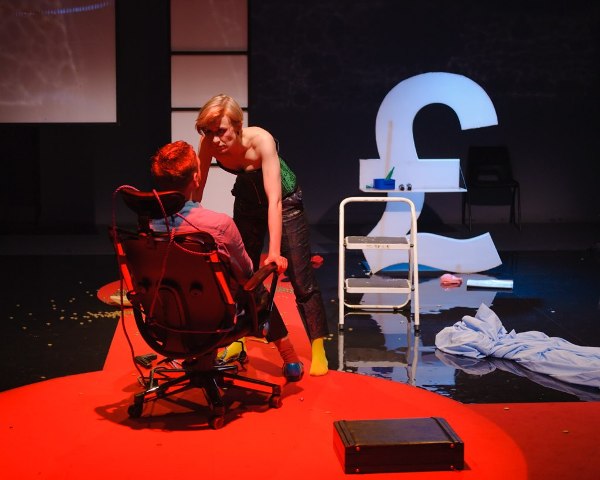 This statement, proudly proclaimed by Queenie (Suzanne Robertson), is the bedrock of Clare Duffy’s MONEY: The Game Show. It could well be the motto of the stock market. Or, at least, if it was then it would not be a surprise.

In an entertaining fusion of high and low-end greed, Duffy stages her play as a game show in which the audience are the players. Upon arrival we are each given a raffle ticket. With these we are divided into two teams: odds with Queenie, evens with Casino (Stuart Ryan). Dressed in suitably shiny and loud business suits, Robertson and Ryan produce lively performances in this double act. Queenie and Casino used to work in the City as high-flying hedge fund managers, weighed down only by their money and their boredom. After the 2008 financial crisis, the two turned to performance art as a way of telling their absurd story of greed, debt and sub-prime mortgages.

On the floor lie 10,000 £1 coins. They are real – really real. The presence of a security guard is enough to persuade me not to pocket a few. And they are not only there as a symbol. The heap of coins is used by the teams to bet on the outcome of games during the show. The interactive madness ensues: chucking cash into suitcases, blindfolding, bubbles and balloon blowing. Participation is a requirement, so if you’re brave and willing then sit on the front row.

As a simplified demonstration of the money market, the game show works superbly. Creating teams is inspired as it introduces a competitive element that I am sure is present on the market floor. It doesn’t take long for us, the audience, to be swept along in our role as testosterone-fuelled City traders betting bucket loads of coins on the bursting of a bubble. At the request of Queenie, I even found myself blindly skidding across the stage with handfuls of pound coins. These scenes of riotous entertainment in Duffy’s play are not dissimilar to parts of Scorsese’s The Wolf of Wall Street. Certainly both portray the financial sector as a chaos of absurd competition while taking a swipe at the sickeningly haphazard attitude adopted towards this game of money.

Between rounds, a darker story of our hosts’s demise is told which tries to anchor the game show conceit. As the set does not change, the lighting is relied upon to signpost these dramatic shifts and Richard Godin’s design does so with clarity and confidence. 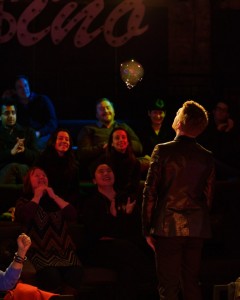 Duffy has clearly done extensive research here. Queenie and Casino’s story of how they made and lost billions helps further demonstrate how the world’s economic system came to the brink of collapse. But, as a reviewer who knows little about economics, I felt alienated by the landslide of financial jargon and so unable to emotionally invest in the story.

Alienation may well be the aim; Queenie tells us that “the world of finance is full of jargon to keep you on the outside”. Duffy uses this: one moment we are outsiders, the next we are participants in the game show. The atmosphere of confusion that prevails seems a fitting mirror to the public’s mystification about global economics.

The result is a cleverly constructed show that tackles an important topic by forcing involvement in the sickening rollercoaster of the stock market. As it continues, the metaphors begin to wear a little thin and the drama never really takes hold, but even so Duffy’s play is a playfully provocative reminder of the price and meaning of money.

What: MONEY: The Game Show

Where: The Royal Exchange Studio, Manchester 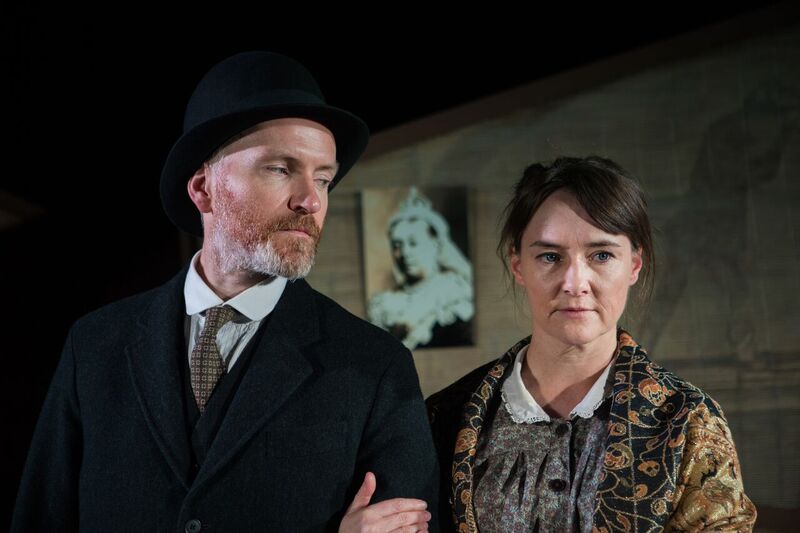 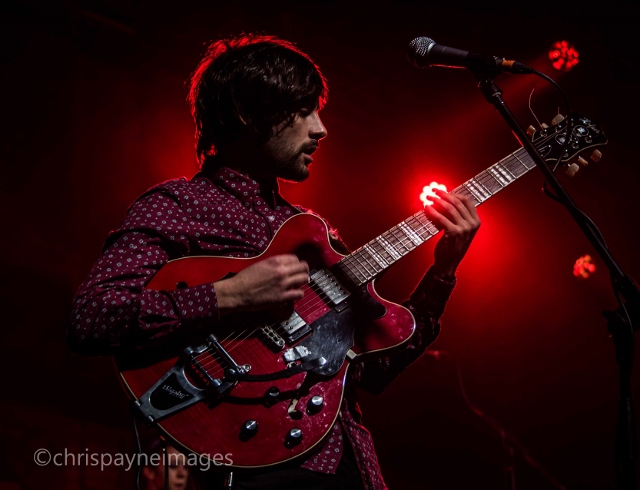 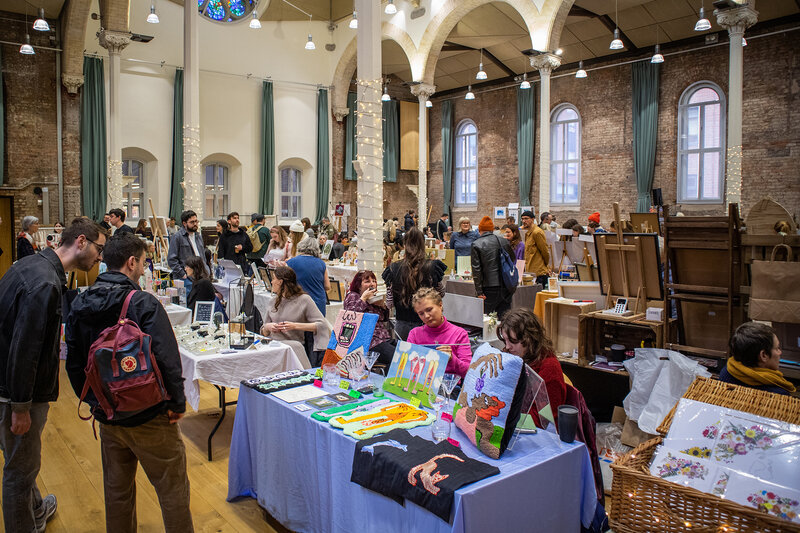 “I’d rather try and fail than never try at all.” Domino Panton-Oakley, Founder of Cotton On MCR