Back in the late 80s I used to stride out of my parents’ house in tie-dye leggings, thick black eye liner and clumpy boots. It caused a bit of a stir in my small town in Cheshire – though that wasn’t difficult to do back then.

Me and my friends probably enjoyed the attention if I’m honest, what teenagers don’t like causing a bit of a stir? Though I didn’t refer to myself as a ‘goth’, it was usually something people called me. In reality the look sat somewhere between goth, hippy, punk and small town girl looking for something a bit different. There were six of us of a similar mind at school. We were sometimes called The Bangles, so we had our group, our tribe. Sisters if you like.

We liked nothing better than to travel to seek out other goths. Our main destination was Manchester on a Saturday or half term afternoon (check out the area outside Chetham’s for the modern day youth versions). It was nice to see people with a similar style, a shared taste.

Imagine what we would have made of Whitby Goth Weekend (WGW) back then. Set up in 1994 by Jo Hampshire, the weekend is a glorious, all encompassing, celebration of all things goth. Whitby is the no-brainer setting because of the Dracula connection, plus it’s a beautiful old port clinging to the edge of the North Yorkshire Moors. Twice a year, in April and, of course, around Halloween, WGW put on two nights of live music as well as three ‘bizarre bazaars’ selling everything you could possible need from a under-bust corset to skeleton hand hair clips. 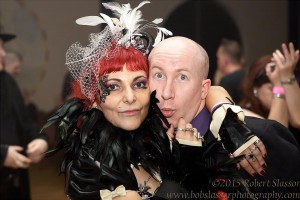 Fast forward to 2015 and at last! One of the children of us six is a goth! And what’s more she desperately wants to go to Whitby Goth Weekend. These days I’m less gothy (as many of us are) though still maintaining a strong interest in music and style so the idea appeals to me. As a writer I like the idea of penning something about it so that fits too, plus I’ve never been to Whitby. And most importantly of all, goth Niece wants Aunty to go too. So honorary goth Sister, Niece and non-goth Nan – after being dropped off en route in Huddersfield to visit friends – pile into the car and head to Whitby.

Unsurprisingly we struggle to get accommodation in Whitby itself but when the Victoria Hotel at the top of the hill in Robin Hood’s Bay comes up on a search I think, ‘I’ve been there, it’s lovely, let’s book there’. It’s a lovely old (aptly) Victorian building and a little removed from the gothiness of Whitby. The reaction of fellow guests to their gothy fellow residents is akin to that in my home town, but people are friendly and a little curious.

With a quick turnaround necessary in which to slap on the paint and pull on the fishnets we hotfoot it into Whitby for the first night. The first three bands are hard rockers Chasing Dragons, WGW regulars Bad Pollyanna, and Fearless Vampire Killers with their Halloween special Jim Carrey tribute. They’re followed by new wave head-liners, Altered Images. Not a band you’d immediately think of playing a goth festival but the authors of a wicked 80s tune in Happy Birthday nevertheless. Claire Grogan, still looking great and as sassy as ever, takes us on a journey through her life in music and also successfully implants Taylor Swift’s Shake It Off song into my head for the rest of the weekend.

The following day we all hit the markets. There’s plenty to poke around at but (not looking to be fitted out for a corset myself) after a while I leave Sister and Niece to seek out a copy of The Guardian and a wander through the streets of Whitby. Easier said than done. So busy with all the visitors wandering around, there are frequent log jams largely caused by people stopping to take photos of festival attendees outfitted in particularly inventive garb. Still, the town’s beauty being appreciated by so many and by such a diverse a crowd is heart-warming to see.

Out in the town in the daylight a wider picture emerges, as well as a few pop-up events that tag onto the main WGW. There are meticulous costumes, put together with amazing attention to detail. There’s great pride and effort in the outfits. Some are dressed as characters – the Clockwork Droids from Doctor Who, the chap hop-per Professor Elemental (though it might have actually been Professor Elemental).  There’s a man with a raven on his arm, a Jack Russell in steampunk googles. There are lovely sights of well-into-middle-age goths sitting demurely sipping tea in the tea shops of the main square.

Into the evening and back to the music there are fine sets from The Last Cry and In Isolation and the much awaited headline set from Spear of Destiny. My only quibble is that Kirk Brandon’s vocals could have used a little more volume. The encore included a surprise special guest – Craig Adams of The Sisters of Mercy fame, so they finished on the Sisters’ Temple of Love and a Joy Division cover Transmission. 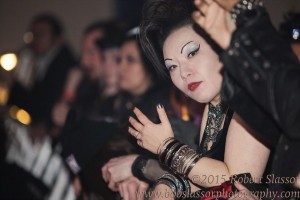 Musically, my personal highlight – because of their high camp theatrical, thumping bass, heavy Cramps influence and the fact that they’re clearly from Blackpool – came from Vince Ripper and the Rodent Show. Against the backdrop of 50s sci-fi b-movie clips the pair tease the audience with a slightly lecherous skull and pay tribute to the late Cramps frontman Lux Interior.

But one of the overriding memories of this weekend will be the sheer warmth generated from everyone involved. Back in the 80s people would often avoid talking to us because we looked a bit scary. But like a Comic Con, which I visited for the first time earlier this year, there’s a huge community spirit, people smile at each other more, hold doors open. When we are meeting Niece back over at the bazaar at the Leisure Centre on the final day we discover she has been befriended by a delightful couple and their friend (male) who is to be maid of honour at their wedding on Tuesday. They are all sporting 19th century style. The bride to be, in a beautiful Victorian ladies overcoat and neatly perched hat, is a font of knowledge on the Victorians. Nobody here is sneering. The ‘normals’ are intrigued too. People dressed in jeans and anoraks politely ask for photos and pose questions about outfits.

A final word to the Whitby locals…god bless you, those two days can’t be easy on your weekend plans. Even going swimming at the leisure centre would have been a challenge. And thank you very much for having us.

The next Whitby Goth Weekend is on April 22–24, 2016. See www.whitbygothweekend.co.uk for details.