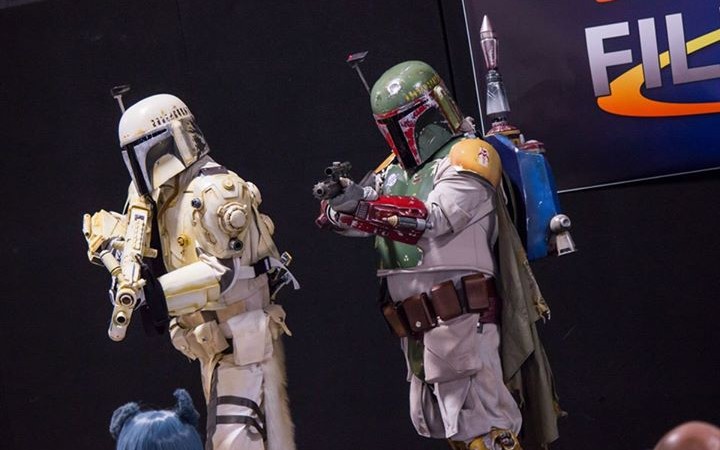 And I’ve only seen two of the three new ones because I was on dates with fellas at the time. Look, it’s not my fault, when Star Wars came out the nearest cinema was about 20 miles away. And a few years later when it finally made its way to TV, my Dad was in charge of the channel-changing in our house and wouldn’t have dreamt of allowing such ‘rubbish’ on the tele – if it wasn’t a Carry On/Western/James Bond film then it wasn’t permitted. So how did I end up going to a Comic Con dressed as a character from a spin-off novel from a series of films I’ve never seen? Well, it’s a long story and begins with a book.

I’m writing a graphic novel for kids called The Amazing Maisie. If I do say so myself, it’s looking good but a huge part of the reason for that is my friend and illustrator Reuben Amarna. The project came about after I caught a glimpse of Reuben’s drawings on a storyboard for a short film he was making – and realised I had a story that fit the style. So the graphic novel idea germinated and, quite frankly, it’s been an education with Reuben guiding me through and saying things like “no Marissa, you can’t do that”.

My latest lesson took place recently. Reuben asked if I’d like to experience the world of Comic Con and, if so, would I like to dress ‘like a twat’ (meant with the utmost affection)? I was in. So off we set for Showmasters Film & Comic Con Manchester at Event City.

Along with his brother Leon Cooper, Reuben attends these events on a regular basis, putting his special effects skills to good use. He’s a dab hand at constructing his own Star Wars costumes which are inventive in their use of unexpected bits and pieces – the shoulder pieces on Leon’s Mandalorian mercenary costume are toy Iron Man masks. 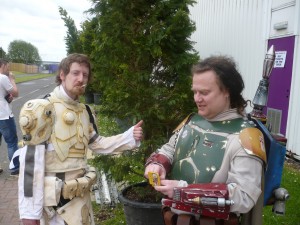 So, what prompted Reuben to go to Comic Cons? “Having suffered a nervous breakdown, heart failure – resulting in PTSD – and finding that I had difficulties with social and general living I found this to be a good escape. I started cos-playing pretty much straight away – it’s always a good way to start talking to people about your costume, how you made it or whatever it comes from. Basically it’s Halloween but over lots of days in the year – I mean Christmas goes on for weeks so why not?”

Leon was quick to get on board. “We started cos-playing before we knew that’s what it was called really. I started dressing up for his film projects, then he started putting Star Wars costumes together. Then we went to our first con – MCM Manchester – in 2013 for an excuse to dress up with a load of other nerds and kinda got hooked.”

Meanwhile, my prep time was spent mentally sifting through all the sci-fi shows I’ve liked over the years. So there’s Doctor Who old and new – that’s a biggie. And The Hitchhiker’s Guide to the Galaxy. And of course Red Dwarf, though I only remember that one after spotting Craig Charles and the massive queue to meet him at Comic Con.

So I dress as Jaina Solo, Han Solo’s daughter. I’ve heard of him. When I tell my fella who I’m going as, he says, “but he doesn’t have a daughter, does he?” “Not a clue.” Apparently she’s a character in the spin-off novels. But for those not familiar with her outfit, she’s basically dressed as a rogue squadron pilot – orange jumpsuit and white vest.

Once buckled and strapped into my costume I immediately disgrace myself by waving about the grey oxygen tube dangling down my front while speculating loudly whether this is my trunk or my penis.

We’ve barely got in the venue when someone asks to take our photo. This becomes a common theme – so good are Reuben and Leon’s costumes that I’m regularly shoved in various shots to make up the numbers. I stand awkwardly, what the hell do I do? The boys are cheating wearing helmets that cover their faces but mine only covers half my face and squeezes my ears so I take to holding it and effecting a cheesy grin. 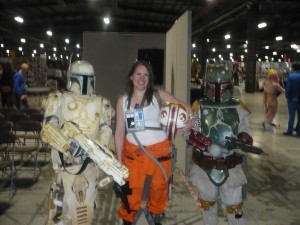 Within minutes the boys have seen someone they know and I am introduced to Nikki Rutter and her friend Ste Davison. That’s clearly the beauty of these events, the hooking-up with people. They know Nikki from Facebook.

Later on there appears to be a group of Doctor Whos (Is that allowed? More than one in one place? Outside of a Christmas special or series finale?). Reuben and Leon know one from the Sheffield Comic Con. Then a guy from Rotherham dressed as Boba Fett’s ‘Dad’ Jango slips into good natured Dad/Son banter with Reuben. You feel the love in the room. Everyone we meet is friendly and smiley. It’s one of the elements that attracted Nikki to it too. She went to her first convention alone as her friend was taken ill at the last minute.

She says: “You can be the best costume or the worst and the cos-play community will just welcome you because you’ve had the balls to do it. I think once you’ve been to one, if you’re that way inclined and you like your sci-fi, you do get into it and you go to them all.” Since then Nikki has become friends with Ste and now helps to promote his homemade weapons – on this occasion assisted by Ray Park, Darth Maul in the later Star Wars films, who played around with a light sabre/whip.

We wander, they look at swords, I take some sweets offered by a stranger, there are comic books and Cookie Monster cupcakes on sale, I wave at people dressed the same as me. We wander by where stars are signing – I manage to recognise Robert Englund known for his role as Freddy Krueger in the Nightmare on Elm Street films (I’ve seen them), Kenny Baker who was R2D2 (I know that much at least) and of course Craig Charles. The original Boba Fett, Jeremy Bulloch, salutes Reuben who returns the gesture.

As we’re meandering around a representative from Costume and Play, the masquerade organisers for Showmasters, approach Reuben and Leon and ask them to join in. A masquerade is akin to the swimsuit bit of Miss World – posing on stage and showing off your costumes but with more clothes, less sexism and more invention with the outfits. 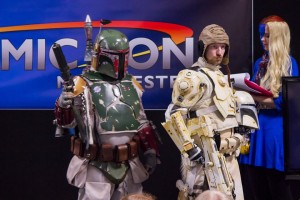 Jess Banks, the director of Costume and Play, feels the same love for the scene as the attendees. “I enjoy these events because we can stand in a large convention, break out into a song from Les Misérables and suddenly the room erupts into song. I never feel far away from a group of like-minded individuals sharing and engaging together in the fandom scene.”

My friends have a few problems on stage when their helmets steam up but their costumes are admired nonetheless. There’s a Mary Poppins, a Miss Haversham and someone from that bloody Frozen film – all introduced by someone from what I think is Avatar (I haven’t seen that either). It’s a shame that the lady dressed as a possessed Sigourney Weaver from Ghostbusters didn’t enter. In the end, Reuben and Leon lose out to someone whose costume is as intricate but twice their size.

Eventually it’s time to leave. Having successfully dehydrated myself for much of the day I manage to hold out until the last minute to go for a wee. Good job too, the boys dressed me so I return from the loo holding various bits and bobs previously strapped to my body. At least I got my trousers back up. That’s something.