Back in 2018, David Nolan took an unscheduled detour from his successful career as a journalist and music biographer to write his first novel, Black Moss. A dark crime tale set around Manchester and Oldham in 1990 during the Strangeways riots, it channelled many of Nolan’s fears and preoccupations into a new sub-genre he himself dubbed ‘Manc Noir’.

Northern Soul spoke to him about the process at the time, and then again in the pandemic-restricted winter of 2020 when he’d written a follow-up novel called The Mermaid’s Pool. Now he’s completed his Manc Noir trilogy with The Ballad of Hanging Lees, and Northern Soul is back to find out about the last leg of this journey.

“I’ve done what I set out to do,” Nolan says. “I wanted to write three books with a serious message in each that was kind of sugar-coated in the guise of wham-bam crime fiction, which I’ve done.”

This time around, inspiration struck Nolan in an unlikely setting. “I started writing it in hospital,” he says. “In fact, I’ve got a photograph of me in hospital with a blank screen in front of me, feeling very sorry for myself. I’d had a very boring operation which had gone horribly, horribly wrong, I’d been in hospital for quite some time. Awful experience.

At one point, Nolan noticed a patient being brought onto the ward screaming in pain, but being treated nonchalantly by the nurses.

“I felt sorry for him and thought ‘why are they being so cool with this guy?’ Eventually he went somewhere else and I could hear the staff talking. They said, ‘Oh, he’s a hospital jumper. He goes from hospital to hospital, pretending that he’s in extraordinary pain in order to get drugs.’ I thought, ‘ooh, that’s good’ and I literally started tapping on my keyboard. I realised that there was actually loads of stuff going on around me that I could use.”

As with his previous novels, Nolan was driven to write by things that were making him angry.

He says: “I was looking at these statistics coming through as lockdown continued about how online grooming went through the roof. During lockdown there was a 70 per cent increase, all on the same couple of platforms, all owned by the same company. So I was annoyed about that, I was annoyed about being in a hospital with tubes sticking out of me…it all started coming together.” 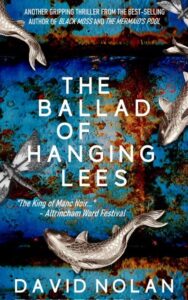 The Ballad of Hanging Lees brings Danny Johnston, the main character from Black Moss, into the internet-centric present day. “He’s a journalist, but I couldn’t work out what he would be doing now,” Nolan says.

“You don’t want to go ‘oh, he’s formed a detective agency’ – shut up, get lost. But then I managed to work out what he’d be doing, which was, because he’s basically unemployable, he sets up on his own as what’s now referred to as a micro-journalism site. You’re servicing one area and you’re the news editor, the reporter, the videographer, the cameraman, everything – that kind of hyperlocal journalism.”

This time round, Johnston finds himself on the trail of online vigilantes who are tracking and killing paedophiles. “They’re unsympathetic victims, so do the police and the media get behind it? Are they trying to catch the bad guys or are they secretly thinking, ‘ah, good on you’?”

In part, this also draws on Nolan’s own concerns about the changing face of journalism. “Journalists are being told that they must hit a certain amount of page views, otherwise there will be ‘consequences’, and that could be up to 850,000 page views a month. I’ve been a journalist and I still consider myself a journalist after 41 years.

“When I started I had a notepad and a bag of two-pence pieces. We’re at the stage now where people are being monitored by how many page views they get. Well, what are you going to do in those circumstances? You’re going to go for the sexy stuff, the clickbait stuff, every time. The important stuff, the unglamorous stuff, is probably going to fall by the wayside, which worries me greatly.”

The awfulness of writing

With three novels to his name, Nolan still can’t say that he enjoys writing fiction, only that the process has been downgraded from “fucking awful” to “less fucking awful”.

“A very, very experienced journalist came up to me a while ago and said ‘you write books, don’t you?’ I said ‘yeah’, and she said ‘I’ve made great progress on my first novel, I’ve just completed my writing room’.

“But it’s nothing to do with candles and writing rooms and whale music and anything like that. It’s just the sheer pigheadedness of grinding your way from the first sentence to the last sentence 80,000 words later. I don’t think anyone would say that was fun, but it might have got a bit more satisfying.”

Nevertheless, Nolan embraced the process of meeting readers on publication of Black Moss, only for the pandemic to shut that avenue down when The Mermaid’s Pool arrived.

“Broke my heart, that did. I literally say, if you’ve got a book club and I can get to it, I’ll turn up at your book club. If you’ve got a library, give me the library for an evening. I don’t want a fee. I never take a fee, ever, because that money could be spent on books and I grew up in a household that really didn’t have books, so libraries are the window to the world to me.”

He continues: “I don’t need a fee, let me just talk to peo 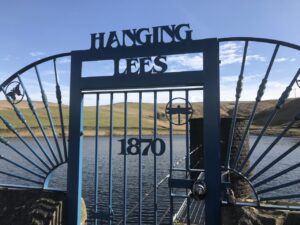 ple and let me tell my story. And then I’ll lock the doors and make them buy a book before I’ll let them leave. I do schools as well, because crime fiction’s an option on the sixth form curriculum now. Yes, I still lock the doors and I still take their money. When The Mermaid’s Pool came out I did some talks and things on Zoom, but it’s just not the same.”

Having written his Manc Noir trilogy, Nolan has no immediate plans to write another novel, and is happy to take things as they come. “In my career, everything that’s happened to me has been an accident, so I’m kind of waiting for the next accident to happen.

“It might be something completely different. It might be sculpting with butter. Who knows? But I trust in the accidents. The accidents have served me very, very well. So yeah, bring on the next accident.”

Needless to say, he’d be very interested in the novels having a life in another medium, in part to help educate people about the very real issues he’s written about. He says: “If it sounds pretentious I don’t really care, but the books have all got something to say. I know that perhaps people will maybe listen to this more in a fiction book than they might do in a factual book, which they might not want to read.

“I know that even more people will listen to it if this was on the telly at nine o’clock at night. Wouldn’t that be a cool thing? I’m a bit of a numbers man. The more people that I can bang on the table and get to listen to me, then that’s what I’m here for. If we can take that to the next level, that would be amazing.”

For now, though, has Nolan’s home-grown genre Manc Noir lived up to his hopes? “Do you know, I’m glad you asked me that, because if you type the words ‘Manc Noir’ into the internet, my face comes up. Amazing. That’s the thing – if you kind of make up a genre, you automatically become king of it. It’s the law.”

However, Nolan admits that his novels have a key antecedent – the Manchester and Oldham-set crime thriller film Hell is a City from 1960, clear nods to which feature in The Ballad of Hanging Lees.

“I just love that film. It’s the touchstone for Manc Noir. Actually, the locations it uses in Oldham and out on the moors are in Ballad of Hanging Lees as a kind of a tip of the hat to Hell is a City. I hold my hands up, that’s the original Manc Noir.”