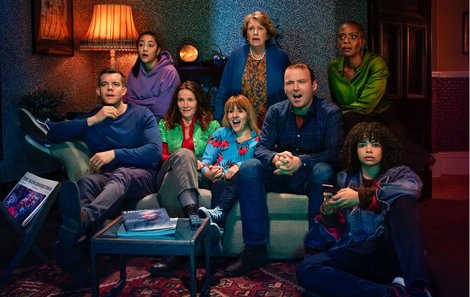 In recent months a good many television shows – your Fleabags, your Game of Throneses – have been hailed as landmarks in the history of the medium. But not nearly enough people have been championing Years and Years, a bold, remarkable British TV drama which, as well as being gripping entertainment, has real weight and impact.

Skilfully directed by Simon Cellan Jones for Manchester’s own Red Production Co, it’s written by Russell T Davies, whose career has taken an unexpected trajectory. Go back 15 years and he was one of the medium’s most fascinating scriptwriters, with the likes of Queer as Folk, Bob and Rose and The Second Coming under his belt. Then he masterminded the revival of Doctor Who, a project which many expected to fall flat on its face, only for it to become one of the biggest hits in modern British television. His stewardship of the show was pretty much impeccable, and some of the episodes he wrote were remarkable, but it meant that his career as a purely original TV playwright was derailed for a while. In recent years he’s put that right.

Davies has said that central idea for Years and Years, which follows members of the Lyons family over fifteen years into the near future, had been brewing for a while, and that the election of Trump was the key event that spurred him on. Sure enough, the dark vision of Britain that the show offers up, in terms of politics, ecology and technology, is a troubling one which has caused more than one viewer to declare it ‘almost too real’ – not an accusation you could aim at Game of Thrones, to be fair. The heart-in-mouth experience of watching it might well require you to have a nice calming sit down afterwards. Just don’t watch the news, obviously.

The great trick which the show manages to pull off is that it anchors its predictions in telling the story through engaging, believable, complex characters, rather than getting lost in a barrage of ideas. What could so easily come across as a neat, dry thought experiment becomes so much more. The viewer cares about the Lyons family, roots for them and relates to them. In large part that’s because Davies’ finely tuned writing is coupled to a marvellous cast. Rory Kinnear, Jessica Hynes, Russell Tovey and Ruth Madeley get the most to do, and they all have impressive moments. Particularly brilliant are T’Nia Miller, who brings life to icy Lyons-in-law Celeste over the course of the six episodes, and Lydia West as her fascinating, tech-obsessed daughter Bethany. Perhaps the greatest performance of all, though, comes from the mighty Anne Reid as family matriarch Muriel, effortlessly getting many of the biggest laughs as well the most stirring, heart-rending moments. She also establishes surely the best TV double-act of the year with Signor, an Alexa-like ‘virtual assistant’ (voiced by Glen McReady). 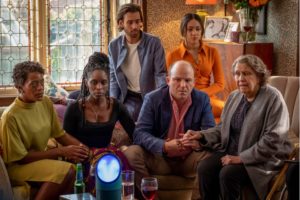 No spoilers here, but the show delivers some almighty moments of high drama. In fact, though, some of the most haunting scenes aren’t trying for spectacle at all, such as when see Vivienne Rook, a ghastly right-wing pundit turned politician played by Emma Thompson, in an unguarded, off-duty moment which sheds light on the reality of her situation. Even more so, there’s a scene in which the assembled Lyons family go off to vote en masse and we follow each member into their polling booth. The truth of who they all vote is often unexpected, but ultimately it all makes perfect sense. It’s an observation, that people you think you know well may vote in ways that you wish they didn’t, that says a great deal about the current political situation.

When you look at it, several of Davies’ Doctor Who and Torchwood contributions explored this same notion that civilisation is far from robust and is in fact just a few short steps away from total collapse. Years and Years is like an outcrop of his masterful Doctor Who story ‘Turn Left’ – in this case, though, more like ‘Turn Right’.  At a push you could even view Years and Years as an evil twin of Davies’ 2004 show Mine All Mine. That starred Griff Rhys Jones as the father of the tight-knit if at-odds Vivaldi family, who discover that – yes! – they own the whole of Swansea and suddenly become rich and powerful. In Years and Years, though, the family members are more likely to lose everything than to gain it.

Yes, the show is a sometimes-messy sprawl, and there are times when it introduces new technology in a slightly clunky fashion that’s more Tomorrow’s World than Black Mirror. And yes, there are moments when it really pushes its luck in terms of putting long, impassioned monologues into the mouths of its characters. In all honesty though it’s actually refreshing to hear non-compliant, non-balanced, just plain angry opinions on mainstream television. Like the heyday of Play for Today, this is TV drama reflecting the world that we live in. 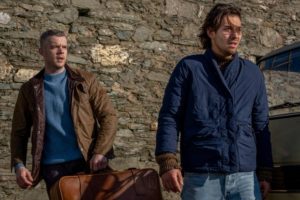 Because ultimately, of course, Years and Years isn’t about the future at all. It’s about the present, and it extrapolates from there. This isn’t a show that features hover-cars and teleport booths. Davies knows that the technology around us only changes if it really needs to. If it works, it’ll last. Indeed, rather than present the tech revolution as the devil itself, he suggests that it might offer people a sense of companionship and solace. Essentially, this is about life with the Lyons, about the connections we make with our family and our friends. Nothing else matters much in the end.

Years and Years is a mighty achievement, a bold, intelligent, rich drama that never loses sight of its characters. It feels important and vital. It’s by no means a flat-out laugh riot but it’s often genuinely funny in a way that hair-raising dystopias usually aren’t. And at times it will break your heart. The conclusion isn’t neat and tidy, but fittingly it ends by asking the same question that the whole show asks: “What could happen next?”

All six episodes of Years and Years are available on BBC iPlayer until September 2019.