Emma Yates-Badley October 3, 2018 Enterprise, It's Not Grim Up North, Northern Soul writes... Comments Off on “Hanging out and helping one another.” The community network tackling loneliness – Manchester Cares

When I was at university I worked as a carer.

During this time I met an elderly woman and soon began popping to her house for a brew and a natter. She was French and, having met her British husband during the war, relocated to England to start a family. She was fascinating, vibrant and full of pearls of wisdom. Another woman, living in sheltered accommodation, was so delighted that I loved reading that she started fishing out books for me from her towering bookcase. She had a mischievous glint in her eye and, on learning that I had a boyfriend from Yorkshire, she giggled and said: “oh, how I do love a Yorkshire man”. Both women were whip-smart, kind and ferociously funny. Yet, both spent most of their time alone.

We’ve been told that social isolation is harmful to our health and that lacking social connections is more damaging than smoking 15 cigarettes a day – and can even increase the likelihood of mortality by 26 per cent. Earlier this year the Campaign to End Loneliness asserted that it’s a far bigger problem that simply an emotional experience. Its research suggested that more than half of those aged over 75 who live alone, and two fifths of all older people (about 3.9 million), regard the telly as their main company. These are heart-breaking statistics, but they don’t end there. Another recent study, carried out by the Office for National Statistics, found that lonely millennials are more likely to have mental health problems, be out of work and “feel pessimistic about their ability to succeed in life than their peers who feel connected to others, regardless of gender or wealth”.

Loneliness, it seems, is endemic. So what exactly is being done to change the situation?

“Loneliness is subjective,” says Vicky Harrold, Love Your Neighbour projects officer at community network Manchester Cares. “What will help you overcome that feeling of loneliness is going to be different for everyone.”

I came across Manchester Cares during a PechaKucha talk at Fairfield Social Club and was immediately struck by the passion to find a resolution to a problem that shouldn’t exist in a society that claims people are more connected than ever. Their solution? To create a community network of young professionals and older neighbours “hanging out and helping one another”. It’s simple yet highly effective. 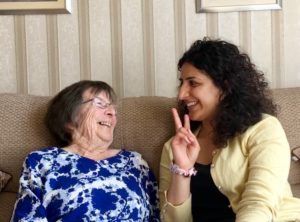 The Cares Family was established in 2011 in North London. South London Cares quickly followed with investment from Nesta and The Big Lottery, and the registered charity began working in additional cities that could benefit from the Cares’ approach. Manchester Cares was set up in 2017.

“We feel passionate about having a place where people can come and join in,” says Harrold. “Where they can meet young professionals, they can meet older neighbours, where they can feel part of something which is quite unique.”

Not content with one Northern city, The Cares Family is branching out. “Our sister charity, Liverpool Cares, is starting this autumn. We’re proud and passionate of our model which is about connecting young professionals and elderly neighbours together but we’re also passionate about making that model unique to the city it’s in – so uniquely Mancunian or Liverpudlian. They’re different cities with different communities and community projects can only work if they are part of the community.” 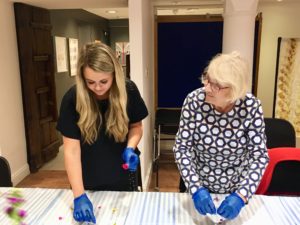 Part of Manchester Cares’ tagline is working within ‘a rapidly changing city’ and nowhere encompasses this sense of modernity more than Manchester. “Originally we started working in Ancoats,” says Harrold. “Ancoats is rapidly changing. Even coming into the office we’re a bit like, ‘oh, OK, the road has been shut off and there’s a new building over there’.”

As well as Ancoats, Manchester Cares is establishing groups in Moston and New Islington, and they’ve already begun working in Hulme – which, again, is seeing a lot of Development – and Levenshulme.

“Levenshulme isn’t rapidly changing with new buildings and developments. But new people are moving in. But that’s the nice thing about our model, we’re connecting the young professionals with the older neighbours that have been living in the communities for 50, 60 years. One lady, who I met the other day, had been living in her community for 96 years. We believe that their identity is deep-rooted in the communities of Manchester and we don’t want their stories to be lost with the young professionals moving in so why not bring them both together either in a group setting or one-on-one?” 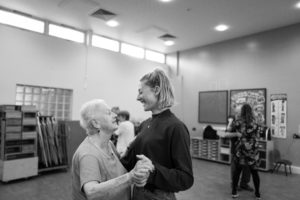 Does Harrold think that transient lifestyles are having an impact on our well-being?

“Young Professionals often move to big cities for amazing opportunities and careers and that’s incredible. But they often leave their families and friends behind. They end up working long, stressful hours and then they go home and sit in a one-bedroom flat or a house share, watch Netflix or sit on social media, and I think that’s a big contributor to the mental health crisis we have among young people in this country.”

Manchester Cares does not want older people in the community to be viewed as vulnerable or regarded with pity. “They are these incredible people who have a whole wealth of knowledge, experiences and skills they can offer. It’s about giving them the opportunity to share all of that.”

The Love Your Neighbour scheme started in Spring 2018 and is billed as a friendship-matching scheme bringing older neighbours aged over 65, who are struggling to get out, and younger neighbours together to spend a little time one-to-one. Harrold has her own Love Your Neighbour called Beryl who is 83. “She’s the most wonderful lady in the world and my favourite time of the week is going to visit her.”

Society places an expiration on human beings. You reach 65 and, particularly for women (this is rife in the media), your ‘value’ decreases. Does Harrold think this attitude is beginning to change? “I would hope so. I do think it is shifting slowly but it’s going to take a long time to make the real deep-rooted change. Once you’ve retired, you’re no longer a benefit in some people’s eyes. So, I think it’s all about understanding their wealth of experience. It’s about reminding people of that. We want people to be connected to these older people who have lived incredible lives and not be this poor little old lady who has no friends or family because, at one point, they would have had an exciting life and, at some point and for whatever reason, that might not be the case anymore. That’s what’s so great about our programmes.”

Manchester Cares also offers group activities and social clubs including dance parties, technology workshops, and game nights. “We’ve got a contemporary dance class coming up, so we’ll see how that goes down. Pub quizzes and Desert Island Discs are our most popular. It’s about finding that activity that unites both members of the community and can facilitate communication, companionship and friendship.”

For more information about how to get involved with Manchester Cares either as a volunteer or a fundraiser, please visit the website.