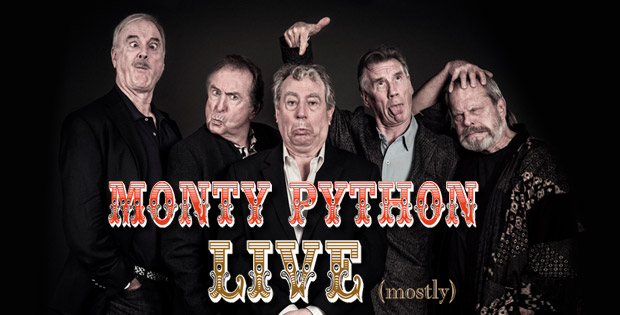 In the row in front is a studious looking teenager sandwiched between middle-aged mum and dad. At every mention of penis, venereal disease and the Chinese in songs played to fill time while we wait for transmission from London’s O2 he turns to one parent then the other as if to say, what have you brought me to?

I was about the same age when I discovered Monty Python’s Flying Circus. It was almost 20 years after the first TV show was screened when I watched the repeats on TV, then later excitedly watched my brother’s VHS copy of the Life of Brian. I was soon quoting it verbatim.

So I’m a fan and it’s a great honour to see them (almost) live at Manchester’s Cornerhouse. Expectations are inevitably high for the reforming of the remaining five (‘one down, five to go’) of the Python six. It’s a ‘greatest hits‘ show performed by five fellas (for those not in the know – John Cleese, Terry Gilliam, Eric Idle, Terry Jones and Michael Palin and their one woman sidekick (Carol Cleveland). They are all in their seventies and the result is a joyous celebration of their oeuvre. Yes there may be a few creaking knees and a lot of greying hair but let’s forget the ageism – all of them take to the performance with gusto. I know plenty of septuagenarians who would sacrifice a small woodland creature for that kind of energy.

The show is a mixture of live sketches, big musical numbers and bits on film, namely Gilliam’s surreal animations and those sketches too tricky to stage. After all we wouldn’t want to be without the 100 metre dash for people with no sense of direction would we? Plus it enables the tricky set and costume changes.

Back in the late 60s the Monty Python team took the playful silliness of the likes of The Goons who had gone before them and ran with it. They created wonderfully absurdist out-of-box thinking skits, visceral, cheeky, often riotously blue yet still shot through with an intelligence. Often references are historical ones, there’s a bit of scientific theory and philosophy and Gilliam’s animations lampoon a lot of classic art works

Here they recreate their best and best-known work: the Spanish Inquisition leap out unexpectedly, the dead parrot pet shop morphs into the cheese shop and they roll out a rousing rendition of Always Look on the Bright Side of Life amongst many other past blasts.

Watching them again you can clearly see their influences on today’s comedians – the likes of Little Britain, The Mighty Boosh and numerous Fringe comedy shows. It all seems strangely fresh and still damn funny. Even if you’ve seen the skits hundreds of times there’s still great joy to be had and they still elicit a laugh. There’s something strangely timeless about it all.

Nor do the team seem bored with their famous work – the energy is there for each gag and the camaraderie still very much evident. There’s frequent corpsing and a couple of senior moment forgotten lines that are subsequently prompted by the others (mainly Palin) with a great deal of affectionate teasing.

There are a few special guests, which is a bit luvvy, but Professor Brian Cox’s deconstruction and correction of the Galaxy Song is a delight and there’s another notable special guest, but I won’t spoil it in case you’re planning to watch one of the repeats. There’s continual mocking self-reference too – the five mug to the audience at the beginning as the words ‘photo opportunity’ flash up on the screen behind them. Elsewhere there are jokey mentions of Cleese’s divorces and Palin’s travel documentaries and warm nods to their sadly absent colleague Graham Chapman.

And that lad in front? He enjoyed it in the end. You never know, they might carry on for longer than expected and he’ll be bringing his kids too. 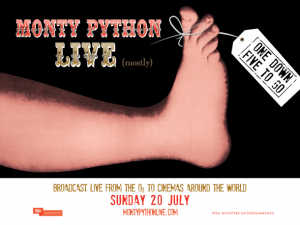