You’ll no doubt have noticed that it’s time for this year’s crop. It’s a crop that gets bigger each year too. No, this isn’t anything to do with our traditional harvest festivals or the burgeoning allotment scene. It’s the month that is fast becoming the new black of the facial hair calendar: Movember. Northern Soul’s Andy Groves has been out running with his Mo in full flow.

This is the month in which the crop of moustaches adorning the lips of our nation’s men folk increases to an alarming degree. Each Mo varies greatly, from the comic to the manly and the just plain seedy, but they’re all a mo and, as the marketing men say, they are all changing face of men’s health and raising money for a range of causes.

So what’s this got to do with Manchester? And why running?

When my Mo-bro, who shall be known only as Dave, asked me to join him in the Manchester MoRun last weekend, I accepted without hesitation – but also without giving either the charity or moustache angle any real consideration. Strange really. Perhaps I was preoccupied when he asked me, or perhaps I was just pleased to have a target to train for but, as this weekend has panned out, the run, on a frosty Sunday morning in Heaton Park, was the highlight.

I’d been looking for an event to train for. I ran for the county as a kid but hardly at all since. But to this day, when I see a running race, my happy memories of former glory come flooding back. Did I think I’d win? Not at all. I just relished the training with Dave and slowly (very slowly) building up to the 10k race distance.

So is that the reason it was so good? No, not on its own.

When I turned up at the venue the ever growing number of Mo’s (is there an apostrophe in Mo’s?) and daft outfits were beginning to create a comedy atmosphere. The crowds grew and the sense of fun developed as the music and the compere worked their magic. For the record, I’d sacrificed my normally bearded visage for the occasion and was sporting a truly horrible Mo, framed between two equally squalid sideboards. When I shaved on Saturday night I could barely look at myself in the mirror; by Sunday morning I was loud and proud in full view of the public.

So is that the reason? Again, not entirely.

The main event came when fairly early in the race when it occurred to me that the field wasn’t very strong.  So I found myself running near the front. Childhood memories came flooding back… 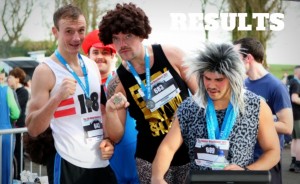 Climbing the first hill after the starter’s claxon had rang out around the park, it was obvious that there were so few people in front of me that I could count them individually. Old habits die hard. The competitive juices started to flow and I set myself goals as I went round.

I was 15th at this stage but surely I’d be overtaken?

Hang on a minute. If I was to be overtaken then where were they going to come from? Surely they’d be showing by now?  I checked over my shoulder and could only see a few likely suspects. This was too much for me. It had whetted the appetite for what I used to do as a kid – running like it really mattered. Before I knew it I’d decided that I was definitely going to finish in the top 30, even if it killed me.

One guy overtook me. He wore a hi-vis yellow jacket. “What time you aiming for mate?” I asked. “About 45 minutes, praps a bit less,” came the reply.

Well that was bang on target for me. I spent the next 40 or so minutes focussing on one thing only – not letting him get away from me.

With 2k to go he was still there. Three guys overtook as a group and hi-vis man went with them. I started to get deflated. Surely I hadn’t made a mess of this? Surely I had enough in the tank not to be overtaken by hoards of Mo-Bros and Mo-Sistas?

I mentally examined myself. A critical appraisal of each part of my body and concluded that “I felt alright”. There’s only one thing for it then, I thought and started to bound off after them, overtaking one, then next and so on until I’d got the lot. The finish line was now in sight and I felt stronger than ever.

We rounded the final corner and I checked nervously over my shoulder just like I was 13 again. I had them. There was no way they’d catch me. I ran hard along the uphill finishing straight crossing the line, smiling for the camera having totally forgotten what I looked like with the horrible excuse for a Mo propping up my nose. I turned to hi-vis man fast coming up behind me.

Over the next 10 minutes, the crew, including Dave, all got back together. We celebrated MoHood, exchanged stories, grabbed a Lucozade and our kit bags. Then went to the pub. Two pints of bitter and a massive burger in the Woodthorpe Hotel later it had become a very good day.

I still had no idea what the charity was about but I knew I’d paid my fee, had great fun and done my bit. What’s more, I still looked really daft.

Where: Heaton Park, Manchester and in venues across the North

When: November – there are some still to be run this year – Leeds MoRunning is coming to Roundhay Park in Leeds on November 24, 2013