In a new series, Northern Soul’s Phil Pearson talks to all sorts of creative types about the room they use to write, paint and, well, create. This week, it’s artist and printmaker John Duffin.

His 30-year prolific output has drawn comparisons with L.S. Lowry and Edward Hopper, making John Duffin one of Britain’s most instantly-recognisable artists

Born in January 1965 in Barrow-in-Furness, Cumbria, at age 16 Duffin went straight from the school gates to the shipyard to apprentice as a draughtsman. Seven winters later and with a “trade behind him”, he clocked-off for the last time in 1988 and headed to London to study fine art at Goldsmiths College (where he was a contemporary of Damien Hirst) and then Central St Martin’s School of Art.

Duffin, 53, has exhibited widely since, including at the Royal Academy and Whitechapel Art Gallery, and his work hangs in many public collections such as the Ashmolean Museum in Oxford, the BBC Collection, Museum of London and in hundreds of private spaces around the world. 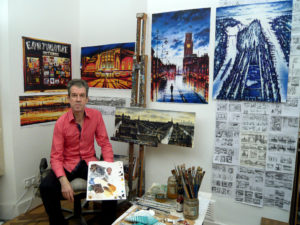 Although he has lived and worked in London for three decades, Duffin regularly returns to his home town to document the changing face of the North of England’s urban landscape in paint and pencil. In the capital, he works in an upstairs room of his home south of the river. In his own words, this is why Duffin works in this space.

“My studio is on the first floor of a Victorian house and has a large bay window and a smaller window on the same wall. From there I can see the rows of Victorian terrace houses on my street. I like seeing people moving by as the time of day changes. It faces west, so I see some great sunsets from the windows and enjoy watching the sky slowly turn dark on winter afternoons.

“The space is regularly changed around to suit whatever activity or process I am involved in. The easel stays where it is, but I also have a desk in the room that I use for making small drawings on. Most things happen on the easel. It has a small sign on it ‘TCB’ – Taking Care of Business, a mantra from Elvis Presley and his Memphis mob. 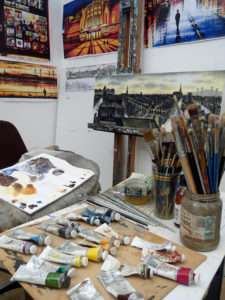 “It’s pretty Spartan. There’s a digital radio, an old hi-fi and an iPad – all used for music or speech radio while I am working.

“The walls are all white. There are some reproductions of earlier paintings on the walls and an occasional image from a newspaper. I don’t like too many distractions when I am working on new paintings. I have a L.S. Lowry calendar on the back of the door and a tall, thin wall mirror that I use for looking at the painting in so that I can see it in reverse and see it afresh and judge what needs changing.

“When I’m working I don’t see much of what’s around me. I just see the picture I am working on; the table with paints on it and a few reference drawings in front of me, I like to keep it simple.

“The room is special to me because it is where I am currently working. You bring your own energy and enthusiasm to a space. I like it plain. I have a large number of art books and reference materials, but they are all neatly on shelves in another room.

“This a workspace and I don’t want to get side-tracked by anything. Same with the internet, I use it to listen to radio programmes or music. I rarely start searching for things on it as you can lose hours of your life on nothing, an artist needs self-discipline with their time. 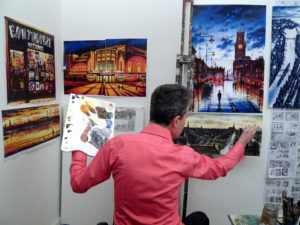 “I work regular hours in the studio. On an ideal day this will be 10am-1pm, 2-7pm and then a late shift 9 to midnight. It doesn’t always work like this, of course, and I often have to deliver or collect a painting, deal with emails or other admin, but the ideal remains to try and get inside the room and do two big stretches of time working on artwork. I don’t wait for inspiration to come around, I get it when I am working and engaged in the activity of painting or drawing.

“I like to try and have goals for each day I am working in the space, this can be as loose as wanting some sketches finished or as tight as knowing how far I want a painting to be progressed by the end of the day. It’s also a place to experiment in, to try thoughts and ideas out and crucially to be able to make mistakes in.

“I have always taken a very pragmatic approach to workspaces and studios borne from being a teenager and working in a bedroom shared with my two brothers – in essence, I’ll work anywhere.

“If I have an easel, desk and some light I am off and working and in a studio of my own imagination. When things are going well, I forget where I am anyway. I get lost in the work and time speeds by. 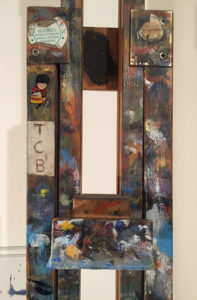 “I listen to Radio 4, Radio 6 Music or my own music, which is usually British guitar music from the past 40 years. Often this acts as a background noise that allows me to focus on visual ideas in front of me and it occupies a part of my mind that allows long periods of focused painting.

“I always believe you work wherever you find yourself, right now it’s this space, next year it might be somewhere else. You take the energy and atmosphere with you and create an environment to get work made in. I always liked the ethos of the art rock group Kraftwerk, who described themselves as ‘Music Workers’. I am the same, I clock-on in my space and am an ‘Art Worker’.”