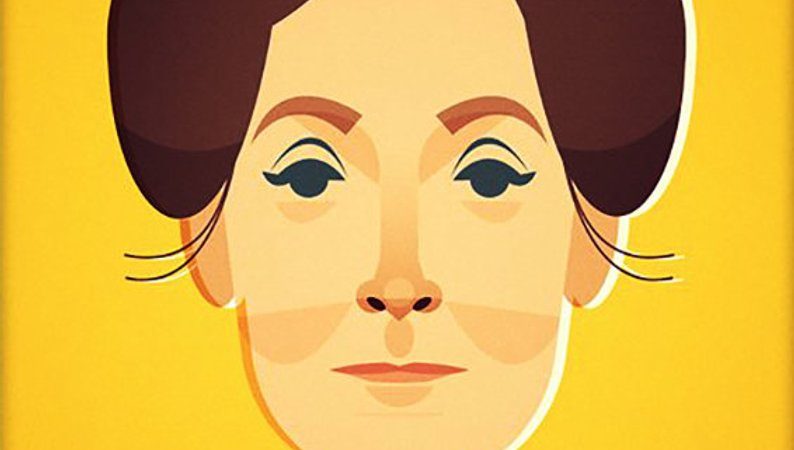 In a series of articles, Northern Soul’s Phil Pearson talks to all manner of fascinating folk about the room they use to write in, paint in, and do all things creative. This week it’s artist, illustrator and designer, Stanley Chow.

Not many artists have got under the skin of American President Donald Trump, but Manchester’s Stanley Chow has. Not a bad achievement for the boy who started drawing on scraps of paper in the back of his mam and dad’s chippy in Altrincham.

Internationally-acclaimed illustrator Chow was born in Wythenshawe Hospital 44 years ago to parents who had emigrated from Hong Kong. For as long as he can remember, Chow has been drawing, initially to ease the childhood boredom of living above the shop.

“Growing up there was always chip paper. My dad used to go to the bookies and there was hundreds of them little red Ladbrokes’ pens lying about as well. I would draw a lot of people’s faces and that’s mainly what I still do now.” 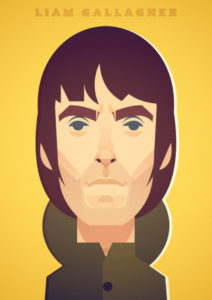 After a two-year stint down south at Swindon Art College in the early 1990s, which Chow describes as “one of the low points of his life”, he returned to his home town and built his career working alone in the city’s Northern Quarter.

“When I came back from art school in 95/96 it felt like I was the only illustrator in the whole of Manchester. I spent most of my time down Oldham Street in the Northern Quarter before it was the Northern Quarter, but then the area developed and the arts scene in Manchester began to happen. Now there’s more artists than you can shake a stick at.”

His breakthrough came in 2007 when a poster he designed caught the eye of American band The White Stripes, who commissioned him to do the artwork for their album Icky Thump. Chow’s efforts were rewarded with a Grammy Award nomination and he’s not looked up from his Mac screen since. His work regularly appears in the pages of publications like The New Yorker and The Guardian and he can name global brands like Saatchi & Saatchi and McDonald’s as clients. 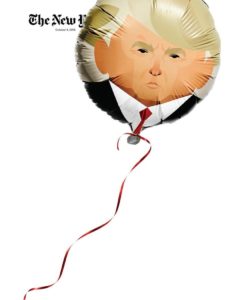 It was a commission from The New York Times in 2015 that rattled the then presidential candidate Trump in the lead up to his election win in 2016.

“I did a picture for The New York Times and they used it as the cover for their magazine,” says Chow. “He [Trump] slagged it off in The Washington Post the day after. I thought it was good at the time. It was great he hated it, but it was meaningless when he became president. But having said that, I don’t know if I’m on a shortlist now of people not allowed to go to the US.”

These days, Chow is no longer in the Northern Quarter, but the Manchester United fan is still living and working in the city. He has a large, two-roomed studio on the third floor of a former textile mill tucked away behind Oxford Road. His is one of dozens of creative businesses such as clothes designers, internet firms and videographers all buzzing away in the 100-year-old building.

When I walk in, Chow is stretched out on a settee having a rest. He must need it, I tell him, given that his instantly-recognisable work seems to have been everywhere in recent years. His vivid portraits of the great and good are now as much a part of Manchester culture as a Tony Walsh verse, a Noel Gallagher chorus, and the yellow and black stripes of the Haçienda and the bee.

“It’s amazing, really flattering and humbling, but at the same time makes me feel really proud. Sometimes I’m sick of them, as well. It’s like too much. There’s some bars and restaurants I’ve got hundreds of my pictures in and I can’t go in them. It’s like being in a band and walking into a bar and hearing your music playing. It’s weird. I’m surprised by the success in Manchester. Most of my work comes globally, mainly New York and London, but it’s quite nice to be recognised in your home town.” 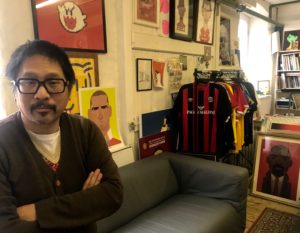 Chow lives in the Old Trafford area with his photographer wife Rebecca and his two daughters aged nine and six. He is only a corner kick away from his beloved Reds’ ground, where he holds a season ticket. Many of his football heroes have been the subject of his art, but he never asks them if they like his portraits. 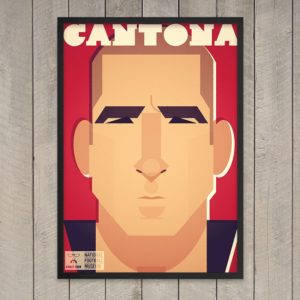 “Sometimes it’s better not to know, because they might not like it and I don’t want to know. I know Eric Cantona’s son, Rafael, bought the original of his dad for his birthday last year. I bumped into him a few months ago and he said Eric’s got it on his office wall. So I assume he likes it enough.

“I think Fergie likes his because he invited me to watch the Crystal Palace game with him, so I hung out with Fergie for the day.”

Many of Chow’s portraits are dotted around his studio along with the football shirts he is designing, other artists’ work and a wide range of objects he says inspire him. So, in his own words, this is how Chow creates his art and why the studio is his My Space.

“I’ve been in this building for five years now. I get in for about 9.30am most days. I get a lift in from a mate or sometimes walk in. It only takes about 25 minutes. I check my emails and respond to as many as possible. I’ll maybe go on Facebook for ten to 20 minutes and I put the radio on about 10-ish. It’s LBC at the moment. I like to listen to James O’Brien rant for a bit about Brexit. That all gives me some sort of momentum to start work for the day.

“With a new portrait there’s two kinds of roads I go down. One is, I’ll just do someone I fancy doing and I go online and find as many pictures of that person as I can. I collect them all together so I can see them all on the same page and illustrate the face using the best part, in my style. You can’t really work off one photograph. I use Illustrator and then I take it into Photoshop and mess around with it a bit. 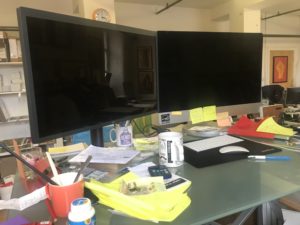 Sometimes, though, I’ll also get commissions to do random people and you just hope they send enough photographic references.

“It depends on a lot of things how long it takes. The hard part is getting the likeness. Sometimes you can hit it in half an hour and when you get that right, that’s when you can add everything else. But other times it can take days to get a likeness and you’re moving bits around. Some people have faces where they look different in every photograph.

“I like this room because it’s big and I’ve got loads of visual stimulus in here. That’s the important thing for me. Whatever corner I look in, there’s something to look at and like. It’s essential I am stimulated by things I like constantly. It also informs the style I work in. You want to be as good as the things you like. And that’s why I want them all around me for inspiration and having an essence of someone else’s work. Whether it’s colours or whatever.

“I have two people in the studio with me. Gary does a bit of work for me and Dom works for me full-time on the print shop and replies to all the annoying emails I get. I get hundreds of emails from people asking if I can draw their pet dog and stuff like that. 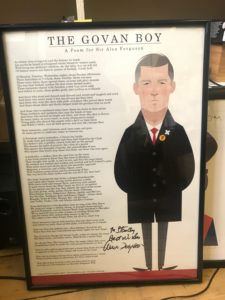 I do like solitude, but the way my business has grown I can’t work without them. Dom is like my calming influence. I’d be having little rages if she wasn’t here, so it’s good to have them around because if they weren’t, I’d be throwing crap around the room.

“I have music on when I’ve reached fifth gear, when I’m completely in the zone. Before that I find music quite distracting. There’s times when I’m so in the zone I’ve stopped talking, stopped thinking. You can talk to me and nothing will penetrate. That’s when I put music on because it’s just there in the background, but I won’t be singing along with it. Every now and then we might go on 1980s Heart or whatever, but I put on shuffle or a film soundtrack. I like Led Zep, The Beatles, Prince. There’s so much I like.

“Usually I’ll leave about 7pm even though my wife wants me to leave at six. It’s because there’s so much to do. I can’t leave until I’ve done what I need to do otherwise I’ll be at home being itchy and scratchy and irritated by not finishing everything I need to do. 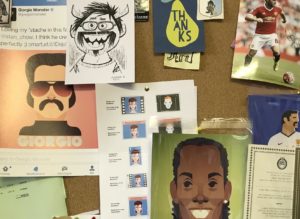 “Most of the time I’m at the desk or on the settee thinking. I have a 20-minute nap every now and again. They’re unintentional breaks because I’m so exhausted. It must annoy the hell out of these guys because I snore. People come in all the time chatting and picking stuff up, but I cut myself off a bit. I try to alienate myself from everyone because I’ve got work to do. And that’s more important to me than anything else.

“My greatest achievement, I think, is that I’m still actually doing it after 20 years, because I’m a freelancer and there’s no guarantees. It could all end just like that.”