Northern Brass Bands and Christmas Carols: a Victorian tradition in the 21st century

As Christmas approaches, the streets are alive with the sound of brass bands playing carols. A glance at any band’s website shows that, outside the contest season, carolling is their busiest time of year.

It is generally accepted that the golden age of brass bands ran from 1860 to 1900. During this period, brass bands expressed a highly visible working-class pursuit. It was a period when brass band contests attracted crowds in their thousands and park concerts were key events in communities.

Bands were an important presence at many civic events, such as the opening of Mechanics’ Institutes, Sunday Schools and libraries. Meanwhile, Christmas carolling was a vital year-end event for Victorian bands which added to their presence in the community. A glance at this time shows us that contemporary bands are carrying on a tradition of playing Christmas carols that is as old as the bands themselves. 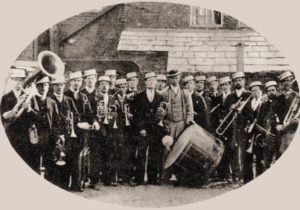 Much of the finance came from employers and, in the case of subscription bands, the local community. This money, however, was mostly in the form of unsecured loans and many bands spent a lot of their time raising cash to repay these debts. Christmas was a time when bands could secure a significant amount of income. In 1898, for example, Shipley Brass Band collected their bandsmen’s subscription fees of £2 for the year after the Christmas money had been collated.

In 1892, the Magazine of Music highlighted the community nature of carolling, noting that “at Christmas the bands turn out in great force to go the round of their subscribers; and we hear that in spite of the intense cold last Christmas, some bands played before the houses of over a hundred members, notwithstanding benumbed fingers and frozen valves”. [1]

The bands’ subscribers would often give money to the musicians for playing carols, which would not only assist the bands in their day-to-day expenses and enable them to donate to charity, but also afford the bandsmen a source of extra cash at Christmas.

On December 3, 1888, for example, the committee of Cleckheaton Christian Bretheren Brass Band agreed “that we go out during the night at Christmas; busking with collectors. That half the money be given to the band and the other half to be equally divided [between the players]”. [2] By 1892, the band was looking to raise money for uniforms, asking bandsmen to contribute money from their Christmas takings. The committee wrote “that if we can get J Beever of Huddersfield to get us a new uniform ready for Christmas. That each member of the band shall leave 10 shillings out of the Christmas money. If not, each member shall leave five shillings each. That suits shall be like Batley Temperance.” [3] 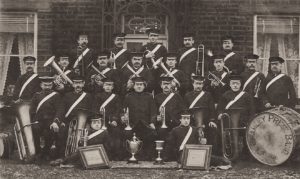 Together with other seasonal and occasional payments, Christmas money provided bandsmen with an element of security when a man’s independence depended on how much spending money – or ‘spends’ – he had. As Dave Russell has argued elsewhere, bandsmen were, despite varying levels of income, the respectable working class. Christmas was a time when bandsmen could have a significant amount of disposable income. As working men, this income increased their independence after essential bills had been paid and they had spends for beer and tobacco. Some of this is shown in how Bramley Old Band would “do the rounds of the better-class houses in Bramley at Christmas, and be rewarded with food, beer and tobacco. This carolling gave Bramley Band the nickname the Bramley Beer and Bacca Band”.

Carolling as a social event

At Christmas, it was not uncommon for Victorians and Edwardian bands to play for prolonged periods of time, and this often including playing throughout the night of Christmas Eve into Christmas Day. James Law Cropper (1864-1974), remembered “going out” as a teenager at Christmas time with Water Prize Band (Rossendale): “We covered the whole neighbourhood. We’d meet at the Commercial on Christmas Eve, at twelve o’clock the Church bells used to ring out. We always blasted off with Old Glory, then up the road as far as Culvert, we played about every three houses, and they all came out to listen to us, and treat us, they used to bring beer out to pass round, and cups of tea or coffee. We used to do the front, back and cellar dwellings of Culvert, and it would take us until four o’clock in the morning to get back to Water and go home. We’d turn out again at about nine o’clock on Christmas morning going round Dean and Water. We played Christmas Carols…All the old ‘Laycock’ tunes, always the old tunes they’d had for generations. As a rule, our music that we played for Christmas was hand written.” [5]

Cropper alludes to the fact that bandsmen drank during carolling, writing Folks from Dean, although they were mainly Baptists and “took an interest in the Band and the right old ones didn’t seem to have anything against the Band, and of course, we played their tunes at Christmas…but as it became very strong anti-drink, the Baptists and the Band did not mix. Eden didn’t connect so much with the anti-drink, dancing and gambling lot”. [6] 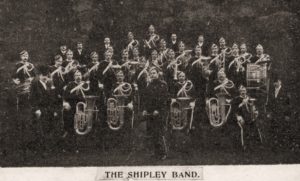 This sounds quite romantic – bandsmen playing carols for the community and socialising with tea, cakes and beer. Yet these sessions had their detractors. It was carolling, and the disturbance it caused, that created comment, one member of the public venting their spleen to The Yorkshireman, in 1881: “If we have not had sufficient music this Christmas, I am no judge of it. From midnight on Christmas Eve to the dawn of Christmas Morn, I lay on my downy bed, a long-suffering Christian…A monster double bass would begin business with a grand bang that nearly smashed the windows, and completely awoke every living thing in the house. I like sacred music, but I object to it strongly, when there is an obbligato of howls from old Towser, and a series of cadenzas from that ancient Thomas, in the next back-yard mingled with it. It would take St Cecilia all her time to draw an angel down with such music as I heard, and when the angel did appear, I am sure it would not be able to stay long amidst such a hubbub.” [7]

In the final analysis, bands relied upon carolling to raise funds to run the bands, contribute to charity, and to supply extra income for bandsmen. But the social side of carolling should not be underestimated. It brought communities together in one Christmas event. When contemporary bands ‘go out’ at Christmas, it is an expression of a tradition that started with 19th century brass bands.