A tribute to Peter Wyngarde

Caleb Everett January 30, 2018 Arts, TV Comments Off on A tribute to Peter Wyngarde 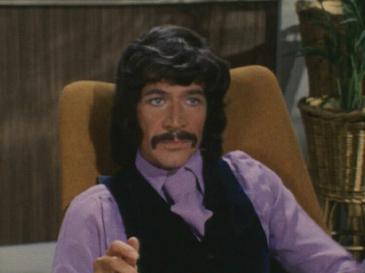 Frills, coiffures and moustaches were at half-mast following the announcement that Peter Wyngarde, or Petunia Winegum as he was known in his queer circles, had passed away. Of course, this means that the only person left on Planet Earth who can convincingly pull off a lilac neckerchief and a three-piece Tiffany Blue suit is Su Pollard.

The male image that lit up early 1960s television was butch and bloody-nosed man-drag, highly-abbreviated when it came to humour or feeling anything other than a crack to the jaw. Yes, Patrick Macnee was impeccably turned out and Roger Moore was charm personified but both were still a monochrome dream of Old Blighty’s dark satanic mills, stationary in bowler hats and stiff-upper-lips. Then came a revelation in ruffles, exquisitely shattering the idea of the televisual man; Mr Wyngarde’s Jason King, appearing with a flamingo flourish on ITC’s Department S.

Though Department S and its spin off Jason King were aired some 20 years before I became a breathing annoyance to the ratepayers of frizzle-drizzle Manchester, the few video tapes available to me were treasured. Handling cases that were “inexplicable, baffling and illogical”, Department S was watched over with guarded empathy by Alaba Peters (Sir Curtis Seretse) who passed cases over to the compressed trousers of Joel Fabiani (former FBI-agent Stewart Sullivan), the mountainous beehive of Rosemary Nicols (Annabelle Hurst) and the Zapata ‘tache of Peter Wyngarde (Jason King). It looked exotic and expensive, though the truth was that Brighton often doubled for the Algarve.

I grew up when men were gargling on testosterone, shrouded in gabardine overcoats and tracksuits, souls stained with lager’s wide-eyed encyclopedic nonsense pouring as easily as sense. My Wilde-eyes were open with curiosity but not quite as understanding. I felt alien to the men around me, even to my younger brother – he dreamed of being a heroic fireman or scoring a winning goal at Wembley – whereas I wanted to grow up to be Jason King; a crime writer who seemed to drink more than he wrote, who spewed wit and intellect so naturally he was essentially Plato in a cravat. To give an example of this impact, by the age of eight I was an expert in using a tea towel as a cravat and pouting out a tart retort. How I was never hurled into the River Irwell is nothing short of a miracle.

“I wanted Jason King to be an extension of me,” Peter Wyngarde said. And so began the creation of a profoundly queer character. Leaning into screens in my youth, I’d witnessed the flared nostrils of asexual camp and the gritty squints of masculinity, but Wyngarde was somehow both. A glorious glittery paradox of what was sold as man. Like a boxer wrapped in a feather boa, where every background gunshot racing was merely the popping of a champagne cork. He was proof that men could be intoxicatingly vivacious, amusing and in touch with a simple emotion. And I’m not the only one to think so. On several occasions, he was voted ‘Housewives’ Choice’ of ‘sexiest man alive’ – those women clearly tired of masculinity that was as boring on the box as it was in the living room- and all because Wyngarde had sex appeal, though it was a camp and menacing quality. 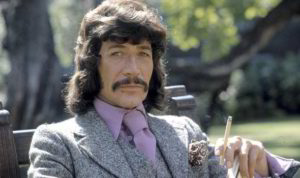 Even Bette Davis couldn’t resist his allure. Prior to Department S he’d been sat with friends on a Pinewood set when a runner insisted that Ms Davis wanted to meet him. Confused (because he was only a jobbing actor at this point) but curious he was guided to Davis’ table, only to find a snarl from behind a cloud of smoke “I hear you have a big cock,” she said. With that Davis handed Wyngarde a note which read “be here at 8:30!” along with her hotel address. He passed the opportunity up, perhaps knowing that two theatre voices drier than the Kalahari and the Sahara couldn’t create a drop of moisture between them.

I recall my favourite Wyngarde scenes on screen, among them Jason King’s hotel room being stormed by burly cockney actors playing Eastern Europeans in search of Top Secret documents. Two of the roughs hold King by the arms while the third meanders around the room – he doesn’t draw a gun or a knife to intimidate, he simply opens the wardrobe. King cries out like a Banshee being hit by a lorry – “no! not my tailored Italian suits!” The evil leader proceeds to rip the arms off the suits as King sinks to his knees with grief. Now…how wonderfully queer is that? It was a neon beacon to this shy little mess living in North Manchester’s answer to North Korea with fish ‘n’ chip shops. 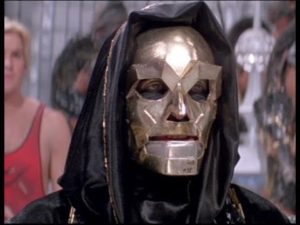 Wyngarde, and indeed King, were martyred by his intelligent but swift-with-judo expertise. It’s likely that his intellect kept his career somewhat muffled when it came to a media he described as “garbage collectors” – the English do like a bumbling fool and do not, as a rule, welcome the brightest into their bosom. It’s a land where we use ‘Smart Alec’ as an insult. Even Shakespeare’s brainiest characters are, at heart, ruthless – from Richard III to Cleopatra. While Wyngarde never faded into obscurity, his career, for my limited money, has never been shown the love it deserves. After a homophobic witch-hunt resulted in Wyngarde in the dock on account of ‘cottaging’, the television roles weren’t as frequent, and Britain was robbed of a superstar, though he reasoned (in 1980) that “it would be very easy for me to cry in my Campari and say the court case was the reason that TV work has not been flooding in but I don’t think it is true. It was the lack of imagination of producers. And if you’re a perfectionist…producers don’t like it, because they are so mediocre.” What a frill-crushingly unapologetically queer life that Jean Genet would have considered a prose lottery.

There are many other roles I would recommend people seek out, including Wyngarde’s lead role in the gothic horror Night of the Eagle and his portrayal as the masked character Klytus in the cult film Flash Gordon. However, I’ve not wanted to pen an obituary or career checklist but rather scribble a throwaway love letter as my way to thank Wyngarde for peppering a youthful and confused beige background with kaleidoscopic excitement. Much as, later in 2018, we can look forward to the introduction of a woman (the marvellous Jodie Whittaker) playing Doctor Who, Wyngarde’s unconventional performances became the stuff of television history. 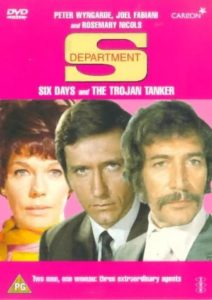