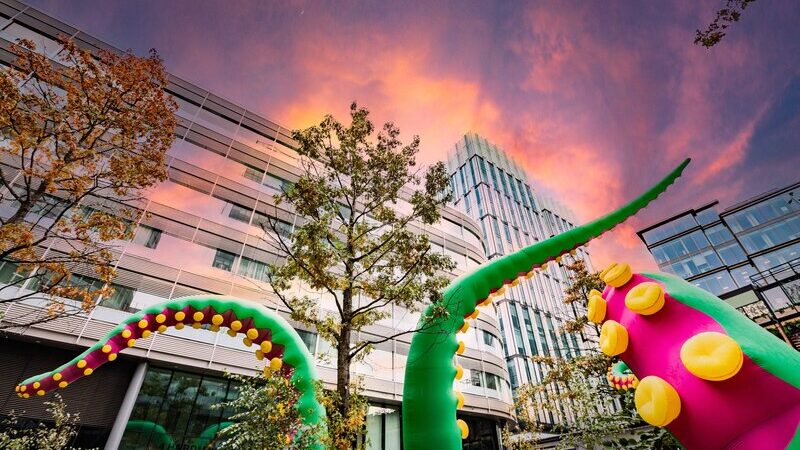 Halloween looks a little different this year, what with the Tier 3 COVID-19 restrictions putting a stop to Halloween hi-jinx, but you can still get your spooky fix if you head into Manchester city centre.

While we’ve all experienced enough of a scare this year, we’re excited to see the return of Manchester’s giant monster inflatables, created by artists Filthy Luker and Pedro Estrellas of Designs in Air.

Organised by Manchester’s Business Improvement District, Manchester BID, which represents more than 400 city centre retailers and restaurants, the monsters will be appearing at Spinningfields, Moda Angel Gardens, Manchester Arndale, The Printworks, Selfridges, 111 Piccadilly and Great Northern Warehouse. To complement the monster at 111 Piccadilly, developer of the building, Bruntwood Works, has commissioned light art by Artin Light. Visitors to the city centre will be able to see some old favourites including Filthy Luker’s iconic giant tentacles along with new commissions for this year. And those who share their pics of the monsters on Instagram and Twitter with the hashtag #MCRMonsters will be in with a chance of winning a shopping weekend in Manchester.

Today is the anniversary of the death of L.S. Lowry. He died 45 years ago on 23rd February 1976 aged 88. This is one of our favourite paintings by the artist - Street Scene, Pendlebury (1935) pic.twitter.com/HevPTgbwHo

@slowreadersclub Hi guys - I was wondering if you might be available to chat to my Music Journalism students at Salford University? All done remotely of course. - Helen

The sun is finally shining ☀️ and we're getting excited about the warmer weather and lighter nights. So, this week on the #NSPoll, we're asking you lovely lot: what's the best thing about #spring? Have your say in the comments below or vote over at northernsoul.me.uk pic.twitter.com/rFetJZl2TA