Helen Nugent August 1, 2015 Art, Arts, Enterprise Comments Off on Something old, something new 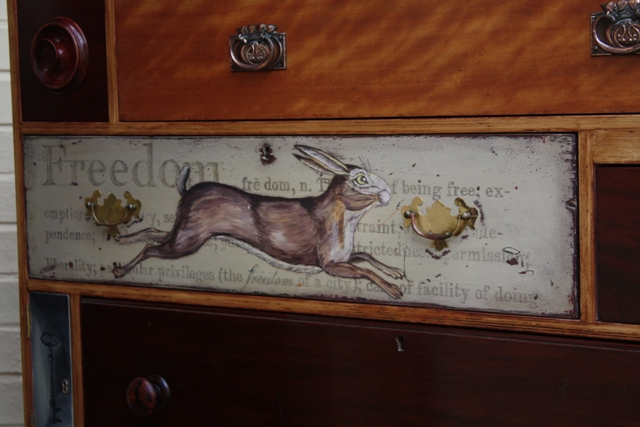 Our family has always had a bit of an obsession with other peoples’ rubbish.

Dad managed to get gangs of local kids excited by litter picks in Worsley Woods, and our Grandma’s house was full of aged furniture picked up in flea markets for a couple of pounds, waiting to have legs lovingly glued back or frayed seats plumped up with horsehair and silk. 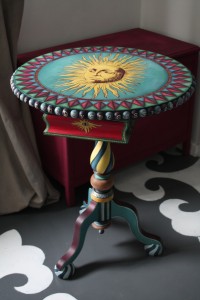 These days I feed a growing addiction for second-hand clothes by haunting charity shops, and I’m unable to throw away old socks or bright swatches of fabric which, some day, may be reworked as cushion stuffing or experimental Christmas presents.

My brother Chris took it to another level. He studied as a furniture restorer and cabinet maker at Manchester College of Arts and Technology and has a passion for the golden age of English furniture – the 18th century – when Thomas Chippendale furnished aristocratic homes and Thomas Sheraton designed his classic chairs.

Chris’s house is stuffed full of bits of old wood and fixtures saved from pieces rescued from the tip, things that might just come in handy for another project. At some point a customer will arrive with a forlorn cabinet or table and he can dig out a brass handle or a piece of oak that makes a perfect donor for the neglected piece.

He finds it difficult to walk past skips.

Recently he’s taken his recycling habit to exciting new heights and started to create new pieces, inspired by his favourite antique designs, but made entirely from wood and furniture that other people have thrown away. From his workshop in Worsley, Salford, he created a beautiful chest of drawers which merges Victorian and Edwardian and 1950s styles in contrasting satinwood, mahogany and ash, as well as a range of other side tables fusing antique and modern parts. He works with local artist Darya Meszkes and together they’ve developed an astounding new style of painted furniture like nothing I’ve ever seen. 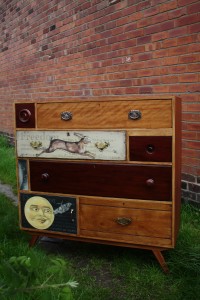 Darya is from the Ukraine and her painting reflects folklore and Romany traditions. On the chest of drawers, their first joint work, the bold face of a moon shines out of one drawer, a hare leaps across another, and on one tiny door she has depicted a key. It’s a tantalising suggestion of a magical world in furniture reminiscent of Narnia or Alice in Wonderland.

Later pieces reflect her love of the classic patterns of William Morris and American designers Victoria and Richard McKenzie Childs, the latter of which is heavily painted and decorated furniture. On a gypsy table built by Chris she painted bold fairground stripes as bright as candy and gave a coffee table a giant chess board and an eerie echo of the childhood nursery – look closely and you’ll see the handles are painted dolls heads rescued from the rubbish.

Chris and Darya held the first exhibition of their painted furniture range at Manchester’s Urban Suite in the Summer and the hare and moon chest is still on display. They exhibited alongside Aidan Spencer who makes stylish tables, chairs and benches from recycled pallets. They are part of a new wave of designer-makers who create striking new classics from neglected wooden furniture destined for the dump.