While I’ve been to an Alice in Wonderland-themed tea party, I’ll admit I had no idea what this Lewis Carroll classic was all about.

I’ve not read the book, nor have I seen it performed, and I must have been living under a rock in 2010 as I even missed the wildly successful Tim Burton-directed film version. So I was looking forward to this festive show, and seeing whether Newcastle’s Northern Stage has much Northern Soul to dish up.

The first impressions were great. The theatre was cosy and the stage in the round felt inviting. Throughout the show the visual production could best be described as powerful and yet simple, a bit like a giant slab of carrot cake with inch thick lemon flavoured cream cheese delicately positioned on top. 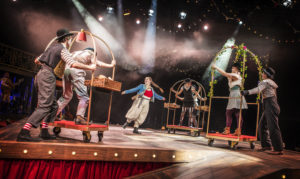 And if Carroll wrote Alice in Wonderland to be interpreted, the Northern Stage’s interpretation saw energetic tomboy Geordie Alice, played by Alex Tahnee, hit the stage. While some see adult themes in Alice in Wonderland, the magical adventures that Alice went through on Thursday night in Newcastle are most definitely U-rated.

With this being the festive period, and having to compete with a few big pantomimes in the region, Northern Stage clearly knows what it’s up against.

There were certainly funny moments, tall moments, messy moments, and yes, a few eye-closing moments (children be warned, the Jabberwocky appears twice). The stand-out moments include the really fun appearance of Tweedle Dee and Tweedle Dum, and without wishing to spoil the surprise, the closing scene is a massive crowd-pleaser that helps to bring the audience to the party. You’d have to be a bit of a Grinch not to enjoy it.

But some bits felt rushed. For example, I really wasn’t sure how Alice ended up wearing a crown. I also felt that the spoken parts in the opening sequences lacked enough clarity to allow those unfamiliar with the story to follow properly.

So, all in all, while I’m still not sure I know the story of Alice in Wonderland all that well, the play was enjoyable. A solid three and a half stars. Perhaps four stars if I were still a 12-year-old child. 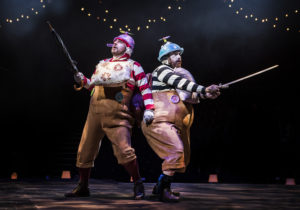 Alice in Wonderland runs until January 6, 2018. For more information and tickets: https://www.northernstage.co.uk/Event/alice-in-wonderland