Review: All or Nothing, Storyhouse, Chester

Chris Wallis October 7, 2017 Arts, Theatre Comments Off on Review: All or Nothing, Storyhouse, Chester

Actors have a thing where, when they go to audition for a TV ad, they walk into the waiting room and find 20 people sitting there who look exactly like them. I had that experience at All or Nothing at Storyhouse in Chester. Only it wasn’t 20, it was 220, and that was just the men in the stalls, including a famous ex-football manager.

Storyhouse is a new venue in Chester, and an experience in itself, more of which anon. All or Nothing is a musical biography about The Small Faces, a 60s beat group, and their lead singer Steve Marriott. Like the Radio 2 playlist, you have to be a certain age to get it, and I – and nearly all of the 600 or so others in the audience – were exactly that. I have no idea what the 20 and 30-somethings scattered among the audience were doing there, unless they were dragged along by parents in revenge for endless afternoons watching pre-Pixar Disney. Those of us who did get it, really got it.

Written and directed by Carol Harrison, an actress whom you might remember as Louise Raymond in EastEnders, she also plays Steve Marriott’s mum. Harrison was brought up in East London, and her cousins lived in the same street as the Marriotts. “They turned up at our flat with a very small, very good looking, stylish and extremely charismatic boy with an incredible voice,” she says. “His name was Steve and I instantly had a huge crush on him.”

She wrote the play, she adds, “to celebrate the East London voice, the Mods and, of course, Stevie and the band”. 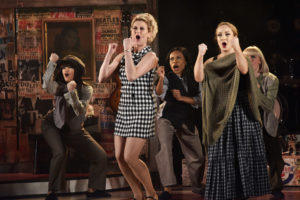 And a celebration it certainly is. An older Steve (Chris Simmons) leads us through the adventures of his younger self (Samuel Pope) from school failure to working in a music shop where he meets Ronnie Lane (Stanton Wright) and Kenney Jones (Stefan Edwards) when Lane comes in to buy a bass guitar. They form a band and recruit Jimmy Winston (Martin Teall) on keyboard. Winston arrives on stage on a gleaming silver vespa with lots of mirrors and wearing a natty suit – a classic Mod.

Mods, for those readers who may not have had the privilege of being around in the mid-60s, were members of a youth sub-culture devoted to snappy dressing. London’s Carnaby Street was the locus classicus of their mode, riding about on multi-mirrored Italian scooters in parkas (there were a couple in the audience complete with large bull’s eye motif on the back), and taking purple hearts and French blues. They were famous for pitched battles with Rockers (leather jackets, motorcycles, beer) at Margate on Bank Holidays. It was recently revealed that these battles were fixed up by the newspapers who paid both sides to provide coruscating copy for their appalled readers. The Small Faces and The Who were the Mods’ bands of choice.

After the usual run of small pub gigs and a couple of singles, the band get a manager, the legendary (or perhaps that should be the notorious) Don Arden. Arden – father of Sharon Osbourne – has a reputation as the thug of the 60s music business, known for hanging impresario Robert Stigwood out of his sixth floor office window to warn him off poaching his bands. Arden’s financial arrangement with the Small Faces was not unusual for the time – a house to share, £20 a week in wages, and clothing accounts at the best Carnaby Street shops. This was almost beyond the band’s dreams of avarice, and Arden, of course, did very well. 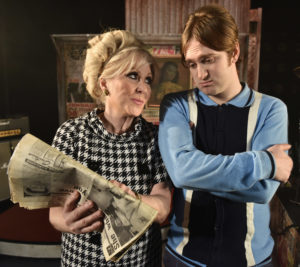 A first hit single was followed by the removal from the band of Jimmy Winstone and his replacement by Ian McLagan. The show suggests this was organised by Arden because of a clash between Marriott and Winstone as to who was the most glamorous member of the band, a battle reminiscent of the Brian Jones / Mick Jagger relationship. Two more hits followed, including the eponymous All or Nothing, but differences with Arden eventually secured the band a move to Immediate Records owned by Andrew Loog Oldham, manager of The Rolling Stones. More hits followed and then the masterpiece, an album called Ogden’s Nut Gone Flake. In an irony of Shakespearean proportions, this was both the band’s musical apotheosis and their undoing. Critically acclaimed as a masterpiece, the studio hours cost so much it led to their bankruptcy, and it was technically unrealisable on stage.

Frustrated by their inability to play their greatest work live, Marriott left the band in the middle of a New Year’s Eve gig at the end of 1968. The show ends here but of course the real people went on, Marriott to form Humble Pie, the others picking up a new vocalist called Rod Stewart and becoming The Faces. Humble Pie was not the success Marriott had hoped it would be, and he pursued lots of other projects. In 1991, he was just about to work with his friend Peter Frampton when a fire swept through his home in Essex while he was asleep, killing him. 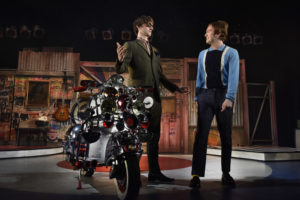 The key to rock and roll bio-shows is the quality of the music, and these guys get it absolutely right. Both Marriotts sound like the original, and today’s technology means that we get a better, clearer version of the songs than the original audiences. We’re treated to most of the hits, but time is taken to tell the story too, and while stylistically it’s played somewhere between Carry On and Till Death Us Do Part, it moves too fast for any of that to matter. There are some poignant moments, particularly when the ghost of the older Marriott watches his younger self at the microphone. Played on a wide stage with a backdrop of street hoardings, I wanted the lighting to do more to direct my attention by focusing more on specific action, but I think I was the only person who noticed.

At the end of the show, the band come back for a curtain call that reprises many of the songs, and the whole audience was on its feet, clapping along and cheering, including the famous ex-football manager. If you’re the right age to get it, this is that elusive thing – an extremely good night out. And even if you’re not, it’s a good story, charmingly told with lots of catchy music to get up and dance to. Not that there was much dancing in Chester. They’re finding the audiences here quite restrained apparently, in comparison to, say, Liverpool. I wonder what the famous ex-football manager would have to say about that? 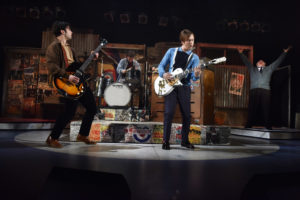 As for Storyhouse, it’s a beautiful new venue in the centre of the old city seating about 800, and there’s a studio theatre on the fourth floor. When you enter the theatre, you come in through the library. Yes, the library. Chester City Library spans three floors in the building, but it all runs together with a restaurant and bar on the ground floor and cinemas on the second and third. It’s a bit disconcerting at first, all these books and not a librarian in sight. There are comfy chairs and tables scattered about, and with coffee available at the bar you could sit there all day.

The restaurant has long tables which you share with other diners, and the menu is ersatz Lebanese. It’s not expensive (mains are around £9) and the service is charming; with just a little more thought, it could be good. The only thing we couldn’t find was the box office, which turned out to be a young man sitting at a table in the bar with a laptop and printer. He too was charming and helpful, but clearly they have some snagging to do. Altogether, it reminded me of Manchester’s HOME , and if I didn’t live an hour away, I’d go there a lot.

For more information about events and shows taking place at Storyhouse in Chester, visit the website.