The Hate U Give: Angie Thomas in conversation with Khalil West, Manchester

Emma Yates-Badley April 17, 2017 Books, It's Not Grim Up North, Northern Soul writes..., Talks & Debates Comments Off on The Hate U Give: Angie Thomas in conversation with Khalil West, Manchester 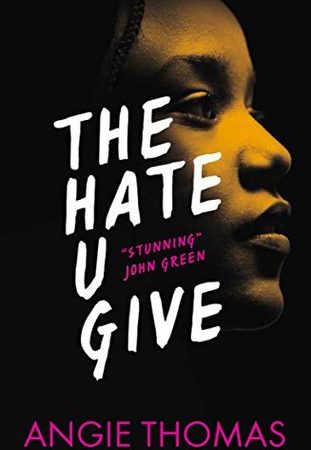 At 31, I read more Young Adult fiction than texts written for grown-ups. There’s just something about the willingness to go further with the big stuff that appeals. From Louise O’Neill’s stark message about consent in Asking For It to teen pregnancy in Non Pratt’s Trouble, the genre is more than just werewolves and topless, mooning vampires.

So, when my friend Danielle told me that Waterstones Deansgate was hosting an exclusive event with YA author Angie Thomas, in conversation with Khalil West, a cultural activist and writer based in Manchester (but originally from the US), I hot-footed it to the city centre bookshop.

Hailing from Jackson, Mississippi, a predominantly black area in America’s south (“I feel like I have to tear away stereotypes about my state as it’s notorious for all the wrong reasons,” she later explains), Thomas has produced the kind of witty and emotive debut that sparks massive things.

The Hate U Give tells the story of 16-year-old Starr whose life is turned upside down when she is the only witness to the shooting of her unarmed friend Khalil by a white police officer. Inspired by the Black Lives Matter movement, it is a gripping story about one girl’s struggle for justice. The book is out in the US where it has already topped the New York Times bestseller list, and the movie rights have been sold to Fox 2000, with Amandla Stenberg (Rue in The Hunger Games) attached to the production. Rumour has it that Idris Elba might also be involved (“we call him Mr Elba because he’s so fine his name demands respect,” Thomas jokes). 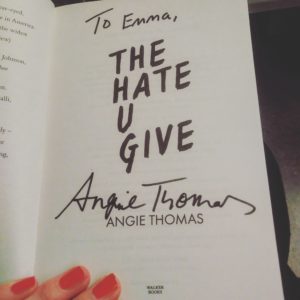 But it all began as a short story, written when Thomas was in college, as a reaction to the killing of Oscar Grant.

“I was like Starr. I was in two different worlds – the neighbourhood and this mostly white, private, upper middle-class school in suburban Mississippi – so I heard two different conversations. At home, he was one of our own. At school, he deserved it, he was a drug dealer.”

She won an award for the short story and describes the process as being “cathartic” but emotionally draining. “I had to put it away after graduation,” she admits.

So, what prompted the return to Starr’s story?

“Treyvon Martin happened. Michael Brown happened. Tamir Rice happened. And all those conversations I heard at school were now being echoed by politicians in America justifying these deaths. Instead of burning everything down, like some people were doing, I decided to write.”

West enthuses: “It’s incredibly relevant, it’s incredibly now.” But Thomas concedes that she was concerned about how the novel would be received due to its contentious subject matter. While she agrees that, yes, of course all lives matter, she points to the systemic problem where black lives don’t seem to matter enough. 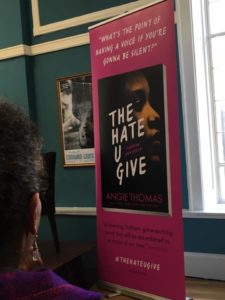 “If two houses are side by side and one is on fire, we’re not going to look at the house that’s not on fire and say, ‘well, this house deserves some water too’. We’d say, ‘what about the burning house? Can we please focus on the burning house?’”

When Thomas was writing this book, she knew that when you say, ‘black lives matter’ to three different people, “you’re going to get 30 different reactions”. She adds that the most common of these are: ‘What about black on black crime?’ and ‘What about blue – meaning police officers – lives?’ She expected these reactions and addresses them in the novel.

“You can’t say it’s an anti-cop book. Its anti-police brutality,” she says. “If we had more cops in America that had held each other accountable, we might trust them a little better.”

On coming to the UK, Thomas was shocked by the absence of armed officers. “Your police officers do not even carry guns. That is crazy.” She is genuinely perplexed. “How do you get anything done if you’re not carrying a gun? Because that is how police officers get things done in America.”

We all chuckle, but it’s a terrifying concept.

“In America, if you want someone to put their hands up, you point a gun at them. How do you do that here? Do you just tell them and they listen?” Everyone laughs as though our police are something from a Monty Python sketch. “You soon learn that as a black person, that gun could be the end of your life.”

Moving on West points out that the novel is “unapologetically about black girlhood and black adolescence”. “I wanted to show black girls and their magic as much as I could. I wanted to give them a mirror and I wanted to show other people a window into their awesome authentic selves.

“When these [shooting] cases happen, usually we hear about boys, and girls get left out of the conversation. We see a lot of outreach to young black boys, but what about young black girls? We’re affected by this too. Black girls get stereotyped too often, especially black girls from the hood like me.”

The best thing about The Hate U Give, and I’ll be careful as I don’t want to spoil the story, is the fleshed out and fully realised characters. Starr isn’t simply a poster-girl for activism, she has her own fears, hopes, concerns and desires. But why write this story for teenagers? 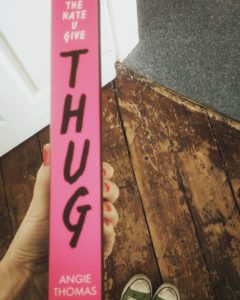 “YA gets a bad rep,” Thomas says. “YA goes there when other books won’t.”

Young people see themselves in the victims – Travon Martin was 17, Tamir Rice was 12 – so she wanted to write for them, supporting their voices and activism. The next novel sounds just as intriguing. “It’s not a sequel, it’s just set in my neighbourhood. It’s about a 16-year-old girl who is a rapper, like 8 Mile but set in the hood rather than the trailer park.”

Thomas believes that black kids want to listen to hip-hop more than read a book because they recognise themselves in the lyrics. “When I was a teenager, I didn’t see myself in enough books and the numbers are still showing this.” Few US – and UK – YA books feature a black central character. “I looked at hip-hop because I wanted to tell my story and hip-hop led to me being alive.”

As the evening draws to a close, Thomas asks the audience if there’s time to tell a story. Her mum, who is sitting on the front row, hands a bag to her.

“When I was 15 I wanted to be a rapper and I loved the group TLC. When you’re 15 it sucks, and because of stuff I was going through in my life I was unfortunately suicidal. If you listen to the song Waterfalls and Left Eye’s rap, she talks about surviving, and so my Mum knew how much the song meant to me. Somehow she got the number of Lisa ‘Left Eye’ Lopes. At home.” 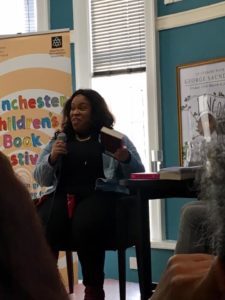 “Shut your mouth!” cries West and everyone laughs.

“My mum called every day and then one day she got her on the phone and I spoke to Left Eye. And she talked to me and she encouraged me. She told me it’s worth it to stay alive.” Thomas breaks down, and so does the rest of the room, before bursting into applause.

Thomas continues. “She said, ‘one day, I have a feeling you’re going to do something awesome so just hang on’ and then she died. I kept in touch with her assistant, Stephanie, through social media and she knew I was going to be in Atlanta a few weeks ago, and she came to my event, and we hugged and cried and she said, ‘Lisa would’ve been so proud of you’.”

In her hand, she is clutching a bandana which Lopes took everywhere, and now Thomas does the same.  “I want you to know that if there’s anyone out there who is struggling, just hold on. It’ll get better.”

I glance around the room and everyone is sobbing.

As Danielle and I queue to get our books signed, we get chatting to the young girl in front about Thomas. “She’s amazing,” the teenager enthuses, and it gives me the warm fuzzies witnessing her excitement. Thomas is delightful, apologising for making everyone cry and posing for snaps.

So, for all the naysayers who say YA is ‘easy’ or ‘fluff,’ I suggest they pick up a copy of The Hate U Give. It’s hard-hitting, relevant and bold stuff.