The words ‘chamber music’ can turn off many perfectly open-minded people. Perhaps they imagine exclusive, intimate Parisian and Viennese salons of the 18th and 19th centuries? A world not designed for them, not open to them.

Unlike the past, however, the best purveyors of this great art form aim to break through the class ceiling, not put bouncers on their salon doors frisking people for signs of cultivation, connections, wealth and intellect. The only thing you need nowadays, for the privilege of listening to good chamber music, is a decent pair of ears.

Having said that, the music played at the 2018 Chamber Music Festival at the Royal Northern College of Music (RNCM), the world-class conservatoire in the centre of Manchester, was a fascinating visual spectacle. A host of brilliant, mostly young, musicians found themselves pinned within its small walls, so we could watch them close-up as they writhed, gurned and wrestled their way through a wide variety of short but strenuously tough works. 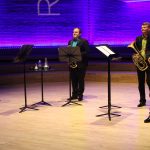 In this high-quality French-influenced festival there was ‘classic’ classical music, such as Frenchmen Ravel, Debussy and Fauré and Brits Britten, Vaughan Williams and Purcell. But there were also new works and premieres, such as a funny four-minuter by RNCM graduate Jinjun Lee and his brass ensemble, which he said was “inspired by a bad dream I had about a giant robotic chicken on a chicken farm”. It’s amazing how like a nervous hen a muted trumpet can sound. Another fine brass ensemble, the A4 Brass Quartet, made the short choral work O Magnum Mysterium by French composer Poulenc sound so vocal that it was as though they were singing into their brass instruments rather than blowing. As for singing, in a concert featuring “Brexit-ignoring” fare of British and French song (a partnership between the RNCM and the Paris Conservatoire), the richest moments came when an amazing young British baritone, Edward Robinson, sang in French, and an equally amazing young French soprano, Cécile Madelin, sang in English.

But chamber music’s greatest moments come from the string quartet, and some real Chamber champions appeared in the Friday evening concert. The endlessly listenable tenor Nicky Spence was partnered with string ensemble Quatuor Voce for a programme of Debussy’s String Quartet (he only wrote one, but it was a masterpiece), Britten, Dutilleux and the Vaughan Williams song On Wenlock Edge.

Spence was superb, but this world-famous four-piece of violins, viola and a cello, played with absolute fire by ex-RNCM student Lydia Shelley, showed what chamber music is all about. Namely, athletic physicality of performance (viola player Guillaume Becker almost literally fell off his chair) both in individual virtuosity and within the overall unified voice of the ensemble, in the service of the most elusive subtleties of expression.

In Quatuor Voce, this most exciting and intimate musical art-form found itself perfectly delivered – by the few, but for the many. 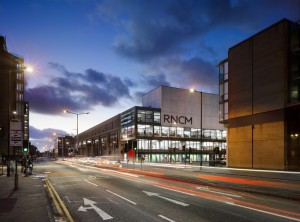