At this time of year, there are some traditions that I can take or leave. But there’s one that is promising to be something worth circling the calendar for – the John Bramwell winter gig at Manchester’s Royal Northern College of Music (RNCM). Following on from last November’s visit, the Hyde troubadour takes to the stage in what will hopefully become a fixture at the venue for years to come.

Another feature of a typical John Bramwell gig is the opening act Dave Fidler. Thankfully, he’s on hand to warm-up the audience who arrive early on a bracingly cold December night. He needs no introduction and airs a couple of new songs from an album to be recorded and released in the new year.

It’s the last gig of a busy year of touring for Bramwell. It’s also been one that has seen him release the excellent new album Leave Alone All the Empty Spaces. Many of the new songs make it into the set alongside the perennial I am Kloot classics. It’s a set that lasts nearly two hours, and even finds space for a couple of unreleased numbers that promise much for a new album earmarked for early 2019. 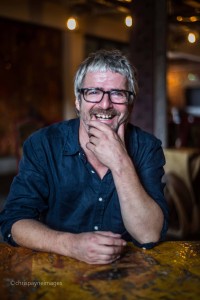 Of late, he has been touring solo. So it’s great to hear his songs with fuller arrangements. Andy Lowles on keyboard, Andy Gautrey, pedal steel, and Andy and Dave Fidler join him in parts throughout the night. Bramwell points to the setlist which bears no relation to the order in which the set is being played. The moments between songs may be chaotic but, once the music kicks in, they are note perfect and harmonious.

Given the setting, Bramwell has dispensed with the usual beer crate he uses to prop himself up on. Instead, he’s been given an ornate foot stall by the staff at the RNCM which turns out to be too low. So, he has a stool to battle with instead – something that he likens to him entering his “Val Doonican years”. The stool causes no end of problems at the points when he changes guitars. Tugging at errant guitar leads adds to the usual comedic element you come to expect inbetween numbers at a John Bramwell gig

He dedicates Same Deep Water as Me to his girlfriend. Along the way, there are nods to a few friends in the audience whom he’s not seen in several years. There’s an emotional homecoming feel to tonight’s show that, even in this bigger venue, still feels as intimate and homely as the previous gigs he’s done this year.

There’s several gigs lined up early in the new year – here’s hoping that we’ll be back here this time next year to do this all again. 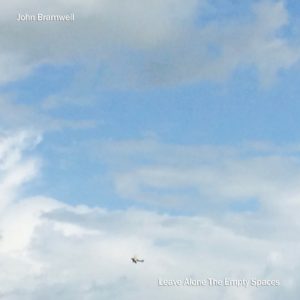 Leave Alone the Empty Spaces is available to buy now.